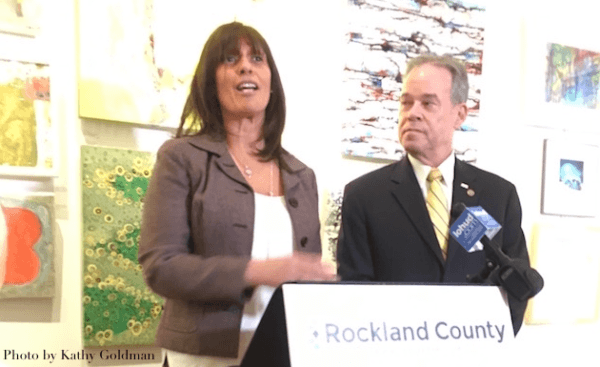 Citing the success of using tourism to drive Rockland County’s economic engine at an afternoon ceremony today at the Penguin Rep Theatre in Stony Point, the county today gifted 22 nonprofits with $211,000 in tourism grants. Partially funded by the state,  I Love New York, an affiliate of New York’s Empire State Development, kicked in $62,650.

“Today we take another step towards continuing to improve and enrich life in our community,” said County Executive Ed Day. “These funds are going to organizations that bring arts, music, theater and culture into Rockland County.” These are competitive grants; a set of performance expectations are attached to every dollar given to these nonprofits.

“Today is one of my favorite days,” said Redzeposki

The average household in Rockland would have to pay an additional $555 in yearly property taxes to maintain current services if not for tourism generated sales and local taxes, according to Director of Economic Growth and Tourism Lucy Redzeposki.

“Today is one of my favorite days,” said Redzeposki, who praised grant recipients for working hard to promote tourism, and for collaborating with one another to synergize Rockland’s tourism assets.

The organizations will use the funds for promotion and advertising their programs, initiatives and events. Rockland has been positioning itself is as a destination where tourists can stop at multiple locations — such as traveling through the river towns — rather than visiting a single village or town and then leaving,

“Visit Nyack is grateful to County Executive Ed Day and Tourism/Development Director Lucy Redzeposki for a 2019 County Tourism cooperative marketing grant,” said Meg Mayo, director of Visit Nyack, the largest grant recipient, at $62,000. “Thanks to their ongoing commitment to promoting tourism in Rockland County we have seen an increase in outside visitors in Nyack, the Hudson River Towns, and throughout the County.”

The Edward Hopper House Museum & Study, awarded $6,000, will use its funds to encourage bicycle tourism from the Share Use Path over the Mario Cuomo Bridge to Nyack by promoting the artist’s penchant for tooling around on a bicycle. The center is developing a bicycle map and is sponsoring a parade to launch the map. In addition, a mobile Art Tourism App, in partnership with Rockland Center for the Arts and Garner Arts Center, “will expand the tourist’s horizon by drawing them deeper into the county to explore the path artists have pursued since the Hudson River School formed in the beginning of the 19thcentury,” explained Jennifer Patton, the center’s director.

Another organization that highlights cycling, Hampton Velo, has received $10,000.

“We’ve been fortunate enough to get a small grant from the county for the previous three years,” said Myles Romanow, the events director for Supercross Cup, which is sponsored by the Kissena Cycling Club and Hampton Velo.“Each year we utilize some funds for advertising, photography, video production, and static signage essentially advertising Rockland both at the event, and off premise,” said Romanow. “That’s really what the funds are earmarked for, promotion of the county as a destination.”

The Supercross Cup, a cyclocross racing event brings more than 1,000 participants from the tristate area and New England to compete and spectate. Many of these visitors need hotel rooms, restaurants, gas, possibly biking gear, and other weekend-away accouterments.

The Garner Arts Center, awarded $20,000, is small but growing arts center that uses grant money to advertise throughout the tri-state area. “Tourism funding to promote GARNER Arts Center’s programming has been immensely important to our ability to reach out beyond the county to the Hudson Valley, northern New Jersey, New York City, Western Connecticut and beyond,” said Robin Rosenberg, the center’s director.