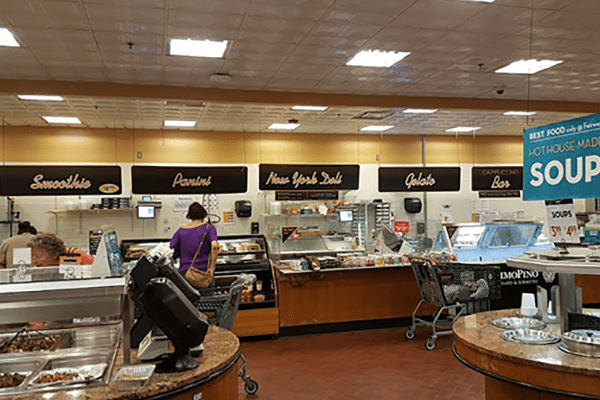 Fairway Market has been put up for sale again, according to Bloomberg.

The New York City-based retailer emerged from bankruptcy only three years ago under new owners. The grocer’s sponsors, Brigade Capital Management and Goldman Sachs, have started looking for bidders and have reportedly received interest from potential buyers.

Fairway operates 15 grocery stores, including one in Nanuet, and four wine stores in the New York City metro area. CEO Abel Porter, who took over in 2017, told Bloomberg last year the grocer would focus on produce, in-store services and online sales.

Shoppers have noticed that the shelves in Fairway’s Nanuet store are low on merchandise. Store insiders have reported a lack of shipments over the past three weeks. It is unclear whether the store is planning to close or whether it is in transition but employees from the store report it is closing.

Following its Chapter 11 bankruptcy filing in 2016, Fairway’s new owners brought its debt down to $84 million from $300 million. Fairway arranged a second debt overhaul in 2018 with a five-year plan.

Independent upscale grocers continue to struggle as traditional supermarkets and e-grocers offer a wide array of organic, local and artisanal products that once made these grocers unique.

The closures of big boxes and department stores along the Route 59 corridor are dampening prospects for economic prosperity in the county.

Independent retailers across the U.S. are fighting to stay competitive. The National Grocers Association’s 2018 Independent Grocers Financial Survey found that independent grocers’ same-store sales were down 0.6% in 2017, but their margins were slightly up. About 71% of those surveyed said they were optimistic about the future of their business. Last year, the total number of independent grocery stores dropped slightly, according to Statista.