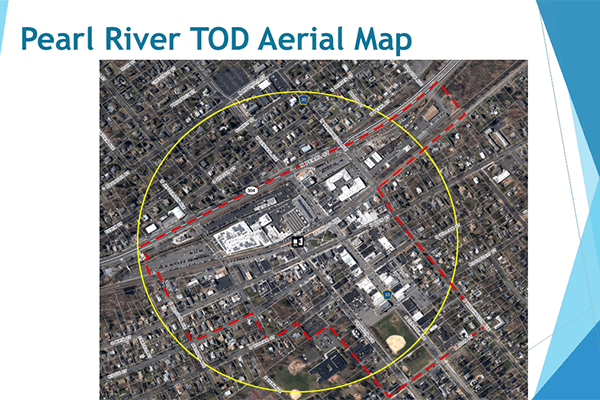 Orangetown last week held its first public hearing on a proposal to rezone the heart of Pearl River’s downtown district into a train-oriented hub of density housing, retail and commercial space. Like suburban districts everywhere, Orangetown is following the lead of other towns, including Clarkstown, that are taking a second look at underutilized downtowns that have the potential to transform into magnets for millennials and empty nesters as well as independent retailers seeking smaller footprints in vibrant, pedestrian-friendly communities.

No new single-family or two-family detaching dwellings would be permitted in the zone.

The notion of optimizing Pearl River’s downtown took root in the 2003 Comprehensive Plan where it recommended “a mixed use downtown area, by adding additional opportunities for development, while limiting and controlling retail uses outside its immediate confines.”

The rezoning, demarcated by Route 304, John Street, Washington Avenue and Madison Avenue, would allow a total of 400 housing units, 250 more than is permitted now, in the downtown area. Housing permitted would include studios, one and two bedrooms apartment. All units, regardless of number of bedrooms must be at least 600 square feet and no units larger than 1500 square feet are allowed. The Town Board said the proposal calls for market-rate housing.

No new single-family or two-family detaching dwellings would be permitted in the zone.

The zoning aims to limit the size of individual businesses (except public uses) to a maximum footprint 5,000 square feet. This is intended to prohibit big box and large retailers from the zone.

A 2018 Pearl River TOD Opportunities Analysis was used to define the goals for rezoning:

There are two zones in the proposed TOD, and within each, there are varying levels of density, with the greatest being concentrated right around the train station.

Several residents spoke up about the proposal. While many said they are in favor of development in downtown, they also expressed concern over parking, low-income housing, too much density that would create a feeling of claustrophobia, and the potential stress on school taxes and municipal services.

A key point made by more than one resident is the paltry NJ Transit train service that runs through Pearl River. This issue was also raised when Clarkstown rezoned a portion of Nanuet to a TOD. Officials in both Orangetown and Clarkstown call this a “chicken-and-egg” situation. Train service, they say, will only improve when there is a critical mass of commuters using the stations, and that putting development around the stations is the best way to achieve that.

However, as one resident pointed out, developers could build housing and retail/commercial in the zones, in both towns, and there is still no guarantee that train service will improve.

“If NJ Transit doesn’t up their game,” said one Pearl River resident, “there will be a lot of empty apartments.

Orangetown will continue to hold hearings on the proposed TOD.

There are basically two types of zones in the proposed TOD, and within each type, there are different densities with the densities becoming denser as you get closer to the train station. All zones contemplate residential uses.

The first type is MUR or Mixed-Use-Residential with three different densities.

The second type is OR or Office-Residential

In the Zones designated as Level 1 or 2, multifamily units are only permitted in mixed use buildings.

In Zones designated as Level 3 (TOD-MUR3, TOD-OR3) you can have  buildings that are solely multifamily residential buildings.