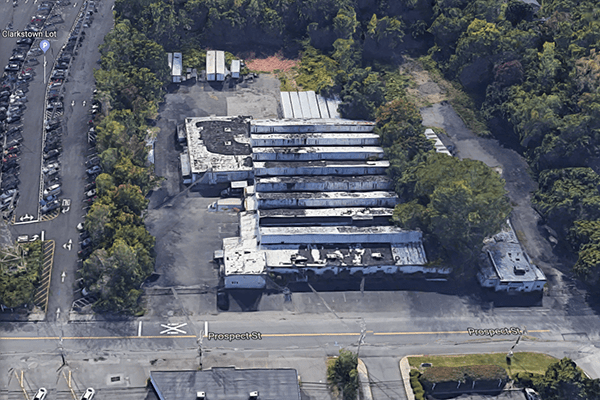 Clarkstown is on the cusp of rezoning the heart of Nanuet’s business district from a pastiche of industry and fallow land into a cluster of dense residential housing and light commercial that is designed for walkability and train use. The zoning plan, known as the Transit Oriented Development, is likely to pass when the Clarkstown Town Council votes on the amended law on June 25th.

There will be second public hearing that night.

The town is hoping the potential mix of rentals and/or condos will attract millennials and empty nesters but the newly zoned palate is also an opportunity for developers, architects, and real estate professionals who will be vying for a piece of the action.

The 37-acre TOD originally called for 750 housing units but was downsized to a cap of 500 to satisfy New York State Department of Transportation’s traffic concerns on state roads. The Town Board may, by resolution passed by a super-majority vote after a public hearing, increase the total number of residential units. No such increase can take place until at least one year after the final Planning Board approval of the initial 500 units.

Additional units would be subject to another environmental review and more traffic studies.

Town Planner Joe Simoes said the first 500 units to be built will boil down to who gets there first rather than an allocated distribution of units across each of the district’s sections. The district does not allow for single family or two family housing.

Simoes says housing units will mostly likely be built first in and around the industrial buildings (the former site of Azar Display) on about 3 acres owned by the Cohen family in TOD 2. Nevertheless, the family may try negotiate with Rockland County to relocate the commuter lot in order to build more contiguous development. Based on allowable building, the maximum housing units on three acres would range from 120 to 150 units.

The goal of the Nanuet TOD, which situates housing close to transit, is to replace commercial uses with a vibrant “downtown” community adjacent to a single-family subdivision, Nanuet’s Main Street, and the Shops at Nanuet to the north. However, existing businesses in commercial buildings are grandfathered as pre-existing nonconforming uses for as long as they operate. A non-conforming use cannot alter its footprint without a variance.

Some of the commercial uses in the district include bank, laundromat, pet and veterinary services, personal care, light repair and maintenance. Interestingly, the zone allows for Bed & Breakfast or an Inn, which do not exist in Clarkstown. The zone also permits bars, restaurants, clubs and gyms, but no drive-throughs.

A special permit would be needed for several uses including senior citizen housing, child day-care and funeral homes.

Apart from the former Azar building, there are fewer than six industrial buildings in the zone, including Precision Mowers, which leases to Circle Collision, and Bergen Paper. Unlike the Cohen family, which is poised to take advantage of the zoning change, it is unclear as to whether these companies will want to relocate.

How The Law Describes The TODs

TOD 1. The purpose of the Transit Oriented Development 1 district is to provide a residential buffer between single-family residential neighborhoods and limited mixed-use developments within proximity to the Nanuet Train Station. The primary use is intended to be multifamily residential uses in the form of 2- and 3-story walk-up residential attached townhouses or condominiums.

TOD 2. The purpose of the Transit Oriented Development 2 district is to function as a transition district between single-family and townhouse-style residential neighborhoods and higher density mixed-use developments located to the east of the railroad tracks and along Main Street. The primary use is principally 3- and 4-story residential apartments, with limited ground floor commercial uses that cater to local residents and train station commuters.

TOD 3. The purpose of Transit Oriented Development 3 district is to function as a mixed-use commercial area adjacent to the Nanuet Train Station and Hamlet Commercial – Nanuet district. Zoning specifications would allow for 3- and 4-story mixed-use buildings, consisting primarily of studio and one-bedroom apartments on upper floors and commercial uses or parking exclusively on the first floor of each building.

Hamlet Commercial Nanuet District is intended to promote development and redevelopment along the Main Street (Middletown Road) corridor in the Hamlet of Nanuet and enhance the public streetscape and pedestrian environment. New development and buildings in this district are encouraged to be mixed-use with residential over retail/commercial uses that promote an active streetscape.