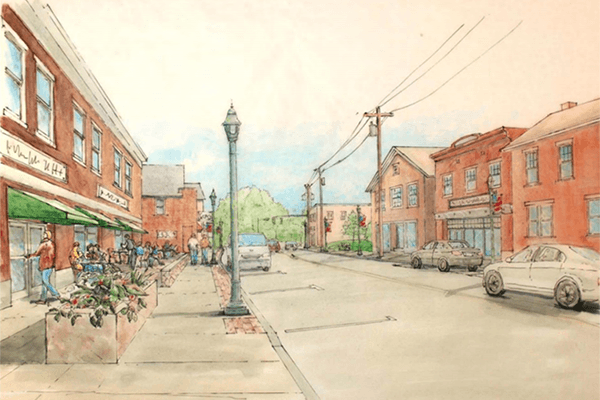 For nearly a decade, the Town of Clarkstown has contemplated transforming a tired, rundown section of Nanuet that encircles the train station into a multi-family residential hub with ground-level commerce and walkable streets. The zoning changes required to turn that blueprint to reality have full-blown support of both the town council and the commerce organizations.

Although worries over traffic patterns and other infrastructure need to be addressed, the proposed zoning on the 40-acre swath in the middle of Nanuet to support a new transit-oriented “neighborhood” are on track to be adopted by early 2019.

So what does this mean for existing commercial and industrial tenants, housing developers, and businesses along Nanuet’s Main Street?

The changes portend opportunity to build housing, create construction jobs, and attract mom-and-pop and independent retailers. The thinking behind building up to 750 housing units in and around a train station is to attract a commuting population, particularly millennials looking for one and two-bedroom apartments. Retailers know commuters are a captive target for goods like food and coffee, and that they buy goods and services on a repeat basis. The new zoning includes 412,777 square feet of new commercial space.

“People don’t want to live next to environmental pollution and noise.”

The TOD (transit-oriented development) gets rid of industry. Existing businesses are grandfathered but sweeping change is likely to be a gold rush for developers to snap up fallow industrial buildings, knock them down, and build housing. Many of the industr

ial buildings are empty and on the market. The few remaining industrial or commercial businesses clustered on either side of the tracks – undeniably eyesores – already have prospectors knocking at their door. And they will have the upper hand when it comes to selling.

One industrial tenant who spoke to Rockland County Business Journal anonymously said, “Everything is for sale if the price is right.”

Developers and investors eyeing these properties know gentrifying the heart of the Hamlet of Nanuet makes economic sense. The Route 59 corridor is lined with retail and the NJ Transit train at the Nanuet Train Station is a one-fare stop to Manhattan. The proposed zoning allows for market-rate housing units to be clustered to the east and west of the train tracks. They will be designed to attract millennials, empty nesters, and seniors who will presumably use the “streets” to walk to restaurants, bars and shops, and to the train station. There is a shortage of affordable rental units in the township, particularly for these demographics.

At the same time, building multi-family housing will be challenging until and unless industrial buildings are torn down. As one industrial tenant remarked, “people don’t want to live next to environmental pollution and noise.” Developers may be able to shield a housing development from a commercial tenant with landscaping but the engineers of the zoning changes fully expect to eradicate industry and heavy commercial businesses from the area.

In talks with landlords and tenants, there does not appear to be any government incentives for industry to relocate. However, market forces will make relocation inevitable.

Meanwhile, how will things shake out for businesses along Nanuet’s Main Street? Will this be a boon or a bust?

Although the Nanuet Chamber of Commerce and the Nanuet Civic Association have worked for five years to champion this zoning change, Rockland County Business Journal learned many businesses and landlords have only a vague understanding of the zoning change, and some know nothing about it at all.

“I didn’t know about it,” said a deli owner, who has been on the street for 10 years.

Tim Chhim, who owns the building where Allstate is located, said he heard rumblings about a change in the zoning, but did not know anything specific.

Brian Kelly, owner of Kelly’s Tavern, said he’d heard there’s going to be a lot of new housing. For Kelly, that means an influx of new customers, as long as housing is market-rate housing. “I’d like to see a lot of new faces around town,” he said.

But Kelly understands landlords who own tired Main Street buildings may also be a target of moneyed prospectors. The new zoning allows for Main Street buildings to add third stories for residential use. It’s not impossible to imagine investors gobbling up buildings as tear downs, and putting up newer, larger spaces for bigger retailers.

“Sure, I can imagine landlords selling off a building, and then the one next to them, and all of a sudden we’ve got big chains or Walgreens on this street,” Kelly mused.

No one would argue Nanuet’s Main Street needs a makeover. Recently, restaurants like Bailey’s and Jacqueline’s on Main have lifted Main Street.

“New businesses are opening,” said Susan Ferese, vice president of the Greater Nanuet Chamber of Commerce. “We are supporting the TOD. We’re hoping good things are going to happen.”

Over the past five years, Michael Khekoian, co-owner of Computuners, has tripled his rental space on Main Street to 4,000-square feet. Khekoian, who has just renewed his five-year lease, says his full-service computer business will benefit from a brand-new downtown population, but he understands his landlord might be tempted to sell the building. That, says the nimble entrepreneur, would not crush him because he has a national business and is not dependent on a local market.

But what about those who own a nail salon or pizza place or a hair dresser who’ve built a business based on loyalty and location? Some of these businesses could fall victim to landlords who sell or who decide to increase rents as the area gentrifies. Others may find themselves with more customers. Either way, businesses should bone up on what is likely to be the most dramatic change Nanuet has seen in decades.