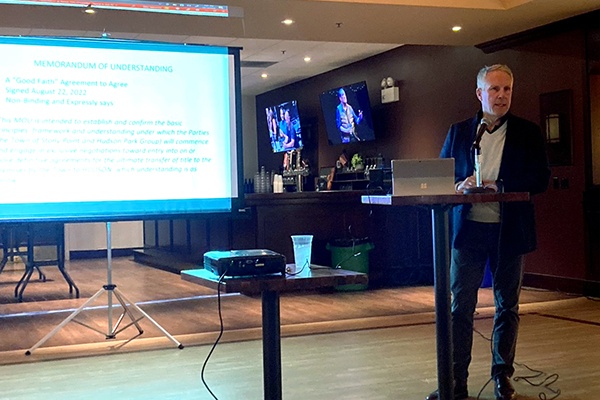 Developer Glen Vetromile and Stony Point Supervisor Jim Monaghan Stress MOU Is A Starting Point To Negotiate A Future Contract To Sell Land; Voters Will Decide On Whether To Move Forward In Nov. 8 Referendum

More than 200 people filled a standing-room-only hall at Patriot Hills Golf Course Wednesday evening to learn more about a proposed project that would bring the former Letchworth Village property in Stony Point back to life.

Glen Vetromile, the developer for Hudson Park Group LLC of Westchester, presented details for a planned housing community targeted at seniors and millennials with small units divided into apartments, townhouses, a multi-family building and an assisted living facility. The developer, who fielded questions during the 90-minute meeting, spoke with passion about Hudson Park’s vision to remediate Stony Point’s signature property to transform it into a neighborhood with accessible walking trails, viewsheds, access to nature and recreation. The project promises a new recreation center abutting Veteran’s Memorial Park, a new courthouse at the town owned Kirkbride building, and two relocated golf holes.

Residents raised questions about a host of issues including projected prices of housing units, the project’s timeline, the impact on roads and sewers, environmental reviews, interruption to the golf course, and accessibility to open space. Vetromile was also asked to explain the Memorandum of Understanding (MOU) signed in August with the town– a key issue at the heart of a referendum question on the Nov. 8 ballot.

Vetromile, along with Town Supervisor Jim Monaghan, in attendance at the meeting, explained the MOU is a nonbinding “good faith” agreement that allows both parties to keep negotiating over the market-rate project concept. Hudson Park is planning to pay $3.1 million to purchase 30 acres, absorb all of the costs estimated at nearly $10 million to raze eight contaminated buildings and remediate the site, and spend an additional $2 million to build a recreation center, relocate the courthouse to the town owned Kirkbride building, and relocate two golf holes.

The proposed project, which can be viewed here, does not include the sale of Patriot Hills Golf Course, which will remain under Town ownership.

The MOU, the developer said, does not finalize anything – it sets the stage for deep study and analysis for the feasibility of the project, including the complex removal of lead and asbestos in the aging, dilapidated buildings. Town officials initiated the referendum to involve Stony Pointers in the long complex process of breathing new life into Letchworth Village.

“This is your land,” said Monaghan.

The town purchased the former psychiatric site more than 20 years ago after the institution shuttered its doors. Administrations have come and gone but the decay at Letchworth has been continual.

Residents wanted clarification over how the deal would be impacted if Hudson Park’s costs for building a recreation center and relocating the courthouse exceed $2 million. The developer dispelled the notion that the MOU would hold the town responsible for any of cost overrun. Instead, both Vetromile and Monaghan explained that if voters give the town a green light to move forward, the town and the developer can continue to negotiate or to scrap the project at any time if consensus is impossible.

The Hudson Park project groups single-floor apartments, townhouses, a rental building and assisted living but sidewalks and spine roads are designed to make the project a walkable tree-lined neighborhood. The developer anticipates a coffee shop on site at a community clubhouse. An independent assisted care living partner will be brought in to run the facility.

One-bedroom rentals will go for $2,000 monthly; town houses will range from $400,000 to $700,000, and the costs for the assisted care facility will be on par with entities like Sunrise and Atria – two operators with facilities in Rockland County. The developer said the influx of housing would help mitigate Stony Point’s rising property taxes, but he said he had not conferred with the tax assessor yet on specific projections.

Vetromile emphasized that a project this size and scale is a multi-year endeavor with an extensive due diligence period, at least an 18-month cleanup and remediation, and a phased building schedule that could take place over several years.

The developer mentioned many others have looked at the site and passed because of its challenges but Vetromile told the attendees he’s built complex New York City projects during his tenure at the Related Companies. Additionally, Hudson Park is underway with a nearly identical project to the one proposed in Stony Point in Dobbs Ferry at a site known as Children’s Village.

He mentioned a project of this scale would bring a raft of construction jobs, as well as permanent jobs once the site is completed.

In 2021, a slim majority of Stony Point voters said no to a proposed development at Letchworth Village because they worried about Raj Amar’s inexperience and because the rigidity of an already-negotiated contract to sell both the land and golf course left too little wiggle room for change. Amar had hoped to build a hotel and housing on the site but had not presented concrete plans or renderings. It was difficult for residents to envision what would happen on the site. Additionally, some residents planted the notion that the site would be bought and flipped for dense housing if Amar’s plans collapsed.

When asked about whether there would be any possibility of flipping the property, Vetromile said no.

“I have no interest in selling the land,” he said. “There are no incentives to flip it. Our business isn’t land development. This is a fun, lovely site. This is my passion.”