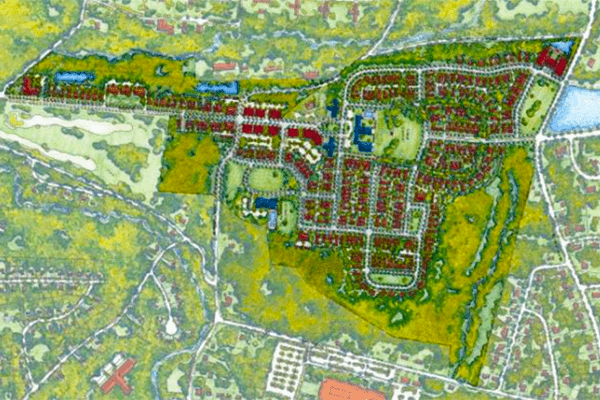 The Town of Haverstraw has negotiated a contract with a housing developer to build market-rate apartments on a vacant portion of the former Letchworth Village site in Haverstraw.

The Town Board recently amended its Urban Renewal Plan to clear the way to facilitate a $12 million sale of nearly 23 acres in the south east corner of the property to BNE Acquisitions, LLC of Livingston, NJ.

Changes to the 2006 Urban Renewal Plan added BNE Acquisitions, LLC of Livington, NJ as a “qualified and eligible sponsor” and gave the Town the authority to enter into a “conditional contract” with BNE to purchase a portion of the Letchworth property for redevelopment.

The town has been in talks with BNE for more than a year; at least one other developer has approached the town with plans to redevelop other portions of the property.

The Letchworth site, like Letchworth Village across Willow Road in Stony Point, has largely been vacant since the psychiatric institution shuttered decades ago. The highest profile prospector for the site was LegoLand several years ago, but residents resisted the proposal, and the town did not pursue the entertainment company’s interest.

The Stony Point site also has seen proposals come and go but now has a developer that wants to build a multi-generational housing community. Hudson Park Group Inc. of Westchester has signed a Memorandum of Understanding with the Town of Stony Point, and residents will decide whether to let the town continue its negotiations in a Nov. 8th referendum.

Haverstraw, in contrast, is not having voters weigh in on the sale of land. Residential development is a permitted use under the existing zoning for the site and the Urban Renewal Plan allows the Town to sell the property without a referendum.

The conditional contract would allow the sale of nearly 23 of the 163 acres for BNE to construct between 250 and 300 market rate multi-family apartments with shared common space facilities and open space. The contract with BNE requires the developer to pay $48,000 per approved apartment unit but not less than $12 million for the entire project. The contract allows for a reduction in the purchase price if the town approves fewer than 250 apartment units.

In August of 2021, the Town entered into an access/investigation agreement with BNE to allow it to develop its plans for the site.

The contract is subject to the developer obtaining the necessary approvals to construct the project and allows 24 months (with several options for extending that period) to secure those approvals. The contract also depends on BNE securing a PILOT (Payment in Lieu of Taxes) program from the local taxing authorities. BNE can terminate the contract if as a condition of obtaining approvals, it is required to construct any “off site” or “off tract” improvements.

BNE Real Estate Group is a national, family-owned company with 60 years of experience in the development, investment, ownership and management of high-quality and vastly diversified real estate assets.

BNE is the developer and operator of the Club and the developer of the Club West at 1000 Murray Court in Pearl River, an active adult rental community for residents aged 55 and older with rentals from $2800 to more than $5,000 per month.

Most of BNE’s development projects are in New Jersey.

In 1990, the State of New York deinstitutionalized the former Letchworth Village and relocated its residents into local communities. At its height, the population of Letchworth exceeded 5,000 clients and approximately 10,000 workers.  In 1992, the state decided to warehouse the buildings and in 2001, the Town of Haverstraw acquired the property and purchased 163 acres for S3.3 million.

The town implemented an Urban Renewal Plan for the property to aid in its redevelopment.

The town sought proposals for both commercial and residential development. According to Town records, 12 proposals were received for housing and none for commercial.  More than ten years ago, the town contracted with Spectrum Development to purchase the acreage for $35 million to build a 55-plus development. Spectrum sold its rights to WCI, and when the market crashed in 2008, plans were scrapped.

At the September 29th meeting, the town resolution stated that “over 15 years the Town has not been able to identify another developer for all or part of the Letchworth Village, resulting in the property remaining vacant and unproductive and falling into a state of disrepair.”