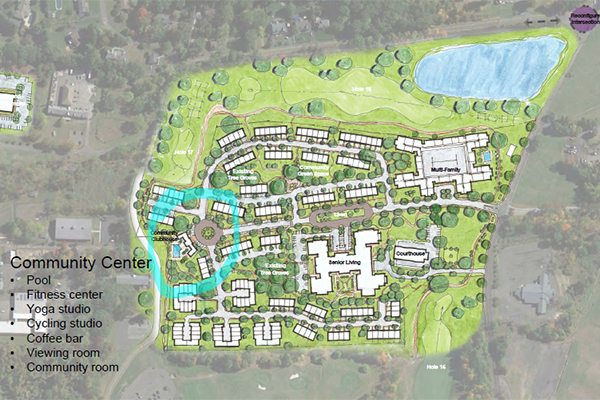 The Town of Stony Point is set to unveil the agreement it has reached with a prospective regional developer who has proposed to build a multi-faceted community-oriented mix of residential and senior units on 31.2 acres of the town-owned and largely abandoned Letchworth Village property.

The Town Board tonight (Tuesday) is planning to vote on a resolution to allow Supervisor Jim Monaghan to execute a Memorandum of Understanding with Hudson Park Group LLC, a Westchester-based real estate development and investment firm, to purchase and redevelop the property. The agreed upon purchase price is $3.1 million, which includes Letchworth Village plus six acres of adjoining land to both the east and the west, plus whatever expenses are incurred to renovate the Kirkbride Hall, construct a town recreation center and reconfigure two holes on the golf course.

The MOU is nonbinding, meaning neither side is yet locked in. The MOU does not include the sale of the town-owned Patriot Hills golf course. The agreement says “the MOU is intended to establish and confirm the basic principles, framework and understanding under which the parties will commence and engage in exclusive negotiations” toward a more final agreement. The document says that the developer is responsible for footing the bill for demolition of nearly all the buildings, including any needed removal of asbestos, and site improvements.

The agreement between the developer and the town includes holding a public referendum on Nov. 8, election day. The agreement acknowledges that moving forward on the proposal is subject to approval of an election ballot referendum by voters.

The MOU lasts 18 months after the parties execute the agreement, and can be extended by mutual agreement by both parties. The MOU calls for the developer to pay just over $8,300 per quarter during the term of the negotiation, with payments beginning in the second quarter of the agreement term.

The developer has proposed a flexible plan to build an estimated 450 market-rate units including townhouses, condos, multi-family, which include 170 assisted and independent senior housing apartments. The project as proposed does not include retail or commercial components.

The MOU also stipulates that the developer will renovate only the interior of the Kirkbride building, and relocate the town justice court there. Kirkbride will remain under town ownership. The developer has also agreed to build an approximately 10,000 square-foot recreation center on a town-owned parcel on the Stony Point Little League property and relocate the recreation facility now housed in Kirkbride.

The agreement calls for the developer to “remove or remediate and renovate” all the former Letchworth buildings except Kirkbride, which will be interiorly renovated.

The developer, according to the MOU, will, after completing renovation and relocation of justice court at Kirkbride, return the building to town ownership.

The renderings envision a planned community with sidewalks, lush vegetation, and walking trails, as well as building a town recreation center adjacent to the baseball fields. The developer is planning to demolish the bulk of the decaying buildings and remediate environmental issues including asbestos and lead that was used when the former psychiatric center was built more than a century ago.

The proposal, which was introduced at a town board meeting in May, is in accord with the Patriot Hills Redevelopment Incentive Overlay — a zoning district passed by the Town of Stony Point in 2015 and revised in 2019 to promote private redevelopment of Letchworth Village.

The proposal comes in the wake of a failed effort by Raja Amar to buy 26 acres along with the Patriot Hills golf course to build a luxury hotel/conference center, and to upgrade the golf course facilities with a new clubhouse. In November, Amar’s plans were defeated by a narrowly won referendum on the election ballot. Residents had organized against the plan because many were led to believe Amar did not possess the experience to redevelop the complex site. Some expressed worry he might ultimately re-sell the property. Additionally, other citizens were concerned over the fate of the publicly run golf course.

Letchworth Village has remained a ghostly relic of the past for nearly 26 years since it shuttered its facility. Over the years, developers have come and gone with proposals ranging from senior living to a waterpark. The towns of Stony Point and Haverstraw bought the properties to build town-golf courses in 1998.