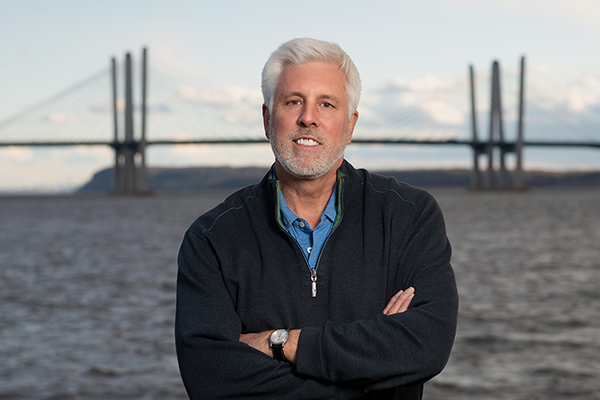 Like one-of-a-kind pearls strung into a beautiful necklace, Westchester County’s Hudson River towns over the decades have become connected by their historic relevance, natural and physical beauty, and assets that have rooted in these iconic places. Towns like Tarrytown and Croton benefit from tourism because organizations have promoted the synergy of the coastline from north to south, from Peekskill to Yonkers. The river’s eastern bank is an established destination.

What about Rockland County? Can Piermont, Nyack, Haverstraw, and Stony Point collectively benefit from holistic marketing efforts that push the attractions, historical highlights, and the beauty of these places for biking, hiking, day-tripping?

“We have learned that the key to promoting tourism is to tie in the river towns,” said Patterson, who is also the founder and principal of HudsonPR, a public relations firm in Westchester.

“This is such an exciting time in the river towns on both sides of the Hudson, from thoughtful and economically vital development of former industrial sites along the waterfront to downtown revitalization and enhanced outreach focused on sustainable tourism,” said Patterson.

HHRT, a nonprofit consortium of riverfront municipalities, has promoted tourism, community advocacy, waterfront re-development, and downtown revitalization for three decades – though it only extended its mission to Rockland’s river towns a decade ago. Patterson replaces Nancy Gold, who founded the organization in 1995. Gold is retiring.

“We have learned that the key to promoting tourism is to tie in the river towns,” said Patterson

The nonprofit has worked closely with the NYS Thruway Authority to create a series of GPS-enabled audio tours. The free tours are available by downloading the TravelStorys app or going to www.hudsonriver.com. Users can listen to walking and biking tours when crossing over the Hudson River on the Gov. Mario M. Cuomo Bridge Shared Use Path or when visiting communities near the bridge including Irvington, Tarrytown, Sleepy Hollow, Nyack, and Piermont.  A driving tour that extends both sides of the river from Yonkers to the Bear Mountain Bridge is also available.

HHRT is working with several governmental and not-for-profit agencies to develop the Hudson River Estuary Restoration Initiative and it is participating on the DEC’s Estuary Advisory Board. The success of the river towns coalesce with a healthy river ecosystem that provides recreational access and maintains the Hudson Valley’s natural beauty. The organization aids municipal governments to identify funding sources for environmental projects.

The initial seeds of the organization were laid when former industrial riverfront towns in Westchester were losing manufacturing and struggling to reinvent themselves, such as the closure of the General Motors waterfront plant in Tarrytown. Today, the site has been redeveloped into mixed-use housing and retail with a walking path.

“The legacy of shuttered industrial sites was a great opportunity for tourism to fill the role of economic development, housing, and downtown development,” said Patterson.

Over time, HHRT, a nonprofit 501C3, was established through an inter-municipal (IMA) agreement that now includes 13 Westchester towns and villages, as well as the Villages of Nyack, Haverstraw, and most recently, Piermont.

“As a group of communities working together, we are able to accomplish more than if we were each working independently,” HHRT’s website says.

“This is great for Rockland, it’s great for tourism,” said Piermont Mayor Bruce Tucker. “Tourism helps our businesses, it showcases our restaurants, it brings attention to our historic sites.” Tucker agrees that Rockland County is “playing catch up” when it comes to thinking more holistically about the benefit of promoting river towns.

“In Westchester, the river towns tie into a whole; visitors hit one town after another,” said Tucker. “We’re starting to get on that ball.”

“We are pleased to continue working with Historic Hudson River Towns to promote Rockland’s beautiful riverfronts,” said Redzeposki. “HHRT has a long history of attracting visitors to the area.”

Municipalities, or sponsorship organizations like the Piermont Historical Society via Rockland County Tourism grants, pay $3,500 in annual dues for membership. Patterson says the organization operates on less than $100,000 a year with dues, grants, and sponsorships.

It’s a small engine that’s pushing a big train via information kiosks, audio walking and biking tours, and social media campaigns. Patterson, who knows his way around public relations, intends to use his experience in national and international tourism to build on HHRT’s success.

Patterson first served in the region as director of public relations and new media for the non-profit educational organization Historic Hudson Valley for nine years, including leading the PR roll-out for the opening of Kykuit at the Rockefeller Estate.

He went on to roles in community relations for Cablevision in the Hudson Valley region, and served as director of public relations, sports properties, for Madison Square Garden. He worked for ten years at Middleton & Gendron Brand Communications in New York City, a leading travel and hospitality focused PR agency where he became chief operating officer and directed account teams for global hospitality clients.