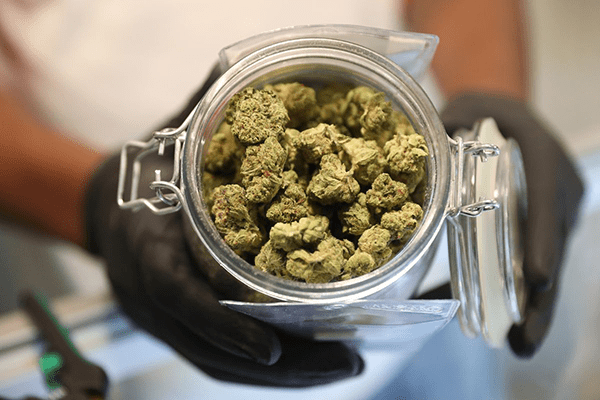 Nyack’s reputation as a liberal, progressive village. A legacy of sensitivity toward racial justice. A village that is friendly and welcoming to new business concepts. A business opportunity.

These are just some of the arguments that seem to have persuaded Village officials to lean toward “opting in” on the new cannabis laws. The Village board will vote on the issue Dec. 9.

“I am leaning very strongly toward opting in for dispensaries,” said Mayor Don Hammond during last Thursday’s public hearing on ZOOM. “I’m still on the fence about ‘on premise,’ and want to make sure we have the right zoning laws in place.”

Cities, towns, and villages that want to opt-out of allowing adult-use cannabis retail dispensaries or on-site consumption licenses must pass a local law by December 31. Municipalities can decide separately on dispensaries and consumption lounges. However, municipalities do not have the power to overturn other provisions of the Marijuana Regulation and Taxation Act, such as legalizing the possession and personal cultivation of cannabis.

The board had previously readied a resolution for its Oct. 28th meeting to opt out, citing the ability to opt back in at a future date. The board had argued it might be prudent to opt out for now and revisit its zoning codes before opting in next year. Many in favor of opting in argue that entrepreneurs might go elsewhere to open new businesses – a potential loss of economic activity for the village.

Although there have been sentiments on both side of the issue, Hammond, as well as trustees Joe Rand and Donna Lightfoot-Cooper, have said they are leaning toward opting in. The village board needs three votes to opt in.

“My general inclination is to opt in, at least to dispensary,” said Rand, adding he’s still weighting opting in for on-site consumption. “I just don’t see a reason, other than cultural stigma, to treat marijuana differently from alcohol. Prohibition against alcohol didn’t work in the twenties, and I don’t think prohibition against marijuana has worked for our society.”

If Nyack opts in, at least to dispensaries, it will join only the Village of Haverstraw, Hillburn, and a few Ramapo villages in allowing cannabis sales and/or consumption in its jurisdiction. Most of Rockland County towns have already decided to opt out of the recently passed New York State law that will permit the sale of cannabis through dispensaries and consumption lounges.

“We are not going to opt out,” said the Village of Haverstraw Mayor Michael Kohut. “It’s legal to smoke on the streets. It would be silly now to prohibit the shops; it’s a way to make money, and its a way for people who have been most affected by the old laws to benefit, possibly even as legal merchants.”

But villages like Nyack that are opting in are taking a careful look at their zoning codes. The Village of Haverstraw will amend its zoning to permit the uses along Route 9w, and not in the downtown.

Nyack Attorney Walter Sevastian said there are provisions in the law that say dispensaries and lounges cannot be within 100 feet of a residential zone or a mixed-use district, 500 feet from a school, and 200 feet from a house of worship.

“That takes out a large portion of our downtown,” said Sevastian. “And even uptown as you’re heading toward the thruway overpass.” He also said “There can only be one within 300 feet of another,” explaining the village planner cited “two potential sites” on Upper Main Street.

At least one resident, as well as Sevastian, pointed out that the legislation has “time, place and manner” restrictions.

“There is an actual tool for municipalities to control the business or guide how it operates,” said Rebecca Pressman. “This is very familiar because this is something you have to do with other businesses.”

Arguments from residents to preserve the opportunity to open dispensaries and lounges point to the potential for economic stimulus, legalizing a drug that is otherwise left on the streets unregulated, the health benefits of cannabis as a pain management drug, and the ability to take advantage of a limited number of licenses once the state gets underway.

“Above all, this is an economic decision,” said resident Michelle Adams. “It’s legalized. It’s here. We’re not going to stop that. Brick-and-mortar concepts are increasingly difficult in this day and age for online shopping. Cannabis is absolutely a viable brick-and-mortar storefront.”

Village resident Clare Finkelman said opting in is like “buying a pig in a poke,” because there is still much that is unknown about how it will work.