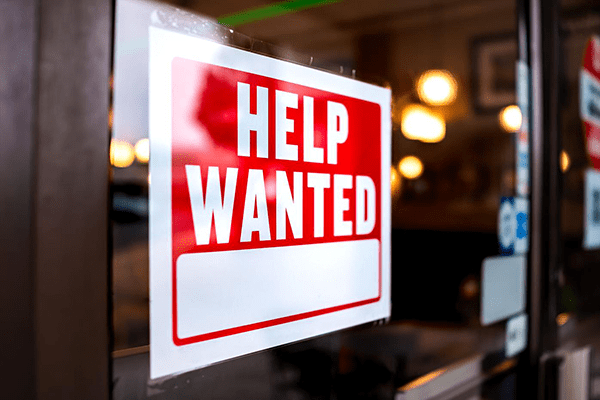 It was during a drive to a sleepaway camp in the Poconos this summer that the signs of the current state of the economy crystalized.

Help wanted signs everywhere.  On a billboard on Route 80.  On a lamppost in a diner parking lot.  On a fence in front of a self-storage facility. The signs shouted: “Immediate Hire,” “No Experience Necessary,” or “$1,000 Signing Bonus.”

When I pulled into a gas station, I quizzed the attendant about the employment situation.  He said he owned the station and the only way he could keep it staffed was by having his wife, and two adult children taking shifts.

What I saw driving thorough New York, New Jersey and Pennsylvania confirmed the reality of the commentary spread across national journals. Per the Society for Human Resource Management, nearly 90 percent of 1,200 employers surveyed “said they were struggling to fill open positions this summer, and 73 percent said they’re seeing a decrease in applications for those hard-to-fill positions. About half of organizations said they’re seeing an increase in the number of applicants failing to reply to a request for an interview.

Businesses are having the toughest time filling hourly, entry-level and midlevel nonmanagerial positions, especially in sectors such as manufacturing, hospitality, food service and health care.

“The worker shortage is a national economic emergency, and it poses an imminent threat to our fragile recovery and America’s great resurgence,” Suzanne Clark, the president and CEO of the United States Chamber of Commerce, said.

We must tackle this crisis on a local level.

We need to accept that job automation is a necessity not a conspiracy of the elite. I once attended a local panel discussion during which a leader from a Rockland manufacturer was shouted down describing the steps the business was taking to automate their production lines.

Rocklanders were irate that people were being replaced by machines.  But according to a recent New York Times editorial: “There’s no future in working the fry station at White Castle. We should welcome the robot that’s now doing that job at some locations. Automating bad jobs has positive consequences for productivity.”

We also need to foster a happier workforce.  Where possible, business owners should provide flexible hours and remote work. Fortune 500 companies are giving employees sabbaticals or even shutting down periodically to reduce everyone’s stress.  At a minimum, we all need to embrace the Internet meme “The world is short-staffed. Be kind to those who showed up.”