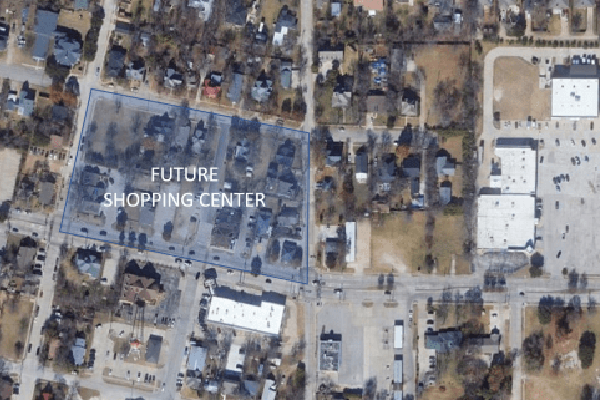 Money is made in real estate by subdividing properties into smaller lots – that is a developer buys a 10-acre parcel and divides it into ½-acres single family lots. But developers also seek their fortunes in the opposite direction – that is by purchasing contiguous parcels and combining them into one lot.

In the trade, this development strategy is called assemblages, and it’s often aimed at getting more than the sum of its parts. By combining several smaller parcels into a larger lot, a developer gets to maximize building potential. What a developer can do on a five-acre site versus a two-acre site varies according to setbacks, minimum frontages and FAR (floor area ratio). In short, a larger parcel tends to be more flexible when it comes to zoning regulations.

There is nothing new about assemblages but in the post-COVID era, there is pent up demand for land for building projects, both for residential housing and commercial use. Assemblages are a strategic way to create large parcels in a county that is land-shy. Additionally, there’s a pent up appetite for larger projects because interest rates remain low even though construction costs have risen.

The Palisades Center was created through assemblages of adjacent parcels.

Assemblages are sometimes sought to build multi-family and school projects.

The property consisting of 6.6 acres is zoned R-40 which allows for one house on a lot with a minimum size of 40,000sf. But, even with enough acreage to build seven single family homes, the minimum frontage of 150 feet, combined with other setback requirements limits the number of single family houses a developer could put on that specific property, even if subdivided. By assembling the adjacent lots, the builder is able to comply with the zoning code and build a much larger structure. While schools are permitted uses in residential zones, a single lot would not allow for a large enough school to make economic sense.

The Nyack building boom has also capitalized on assemblages.

A local developer plans to replace two single-family houses at 249-259 Main Street with a 26-unit multifamily rental apartment called Diana Place. The two houses sit in the DMU (Downtown Mixed Use) Zone which allows for multifamily dwellings. By combining the two lots, the developer was able to maximize the size of the building within the new larger lot and take advantage of building incentives provided for in the Village Code..

The county is also seeing rising demand for senior housing.

In Garnerville, a proposal exists to combine five residential parcels on Ramapo Road to construct a 70,000sf senior living facility. Developers see much more value in the larger project than in replacing the residential structures on the 4.88-acre combined lots.

In each instance, lots with limited building potential were combined to allow for larger structures of differing uses. Assembling the parcels into one lot made more economic sense.