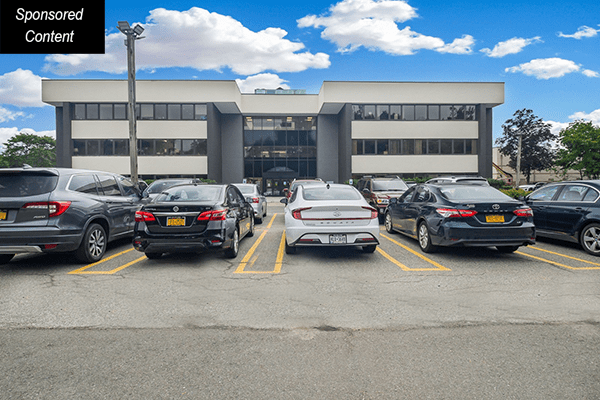 In 2013, Renova Equities of Suffern bought 222 Route 59, a run-down commercial building in Airmont. The $6 million purchase that has been rebranded 222 Medical Plaza, was the real estate company’s first commercial foray into Rockland County, adding to a portfolio of commercial and residential properties in New York and New Jersey.

Following years of a top-to-bottom multi-million renovation completed in 2019, Renova transformed the 65,000-square-foot building into a first-rate medical hub that houses more than 20 practitioners spread across fields including ophthalmology, gynecology, dermatology, pediatrics and dentistry.

In 2019, Mt. Sinai leased 6,500 square feet of space for ten years for a unit that deals with 9-11 related illnesses, according to Sam Kupferstein, Renova’s vice president.

“The hospital wanted a prestigious building outside the city,” said Kupferstein. “They wanted patients from New Jersey, Orange, Rockland to have a place nearby rather than having to travel into the city.”

The calculated investment could not have been better timed. Healthcare real estate has performed strongly throughout the COVID-19 pandemic, unlike other commercial real estate sectors, including office buildings. Even though the sector was subject to drastic restrictions, safety precautions and modified practices, the healthcare market is strong.

Standing the test of time during the pandemic, medical office buildings are becoming sought-after fixtures in many investors’ portfolios and the asset class’s pricing is now at a premium.

According to the real estate firm Marcus and Millichap, the rise in population aged 65 and older and a boom in elective procedures and routine appointments could increase the number of buyers of sub-$10 million on-campus and off-campus assets this year. Additionally, despite a rise in telemedicine during the pandemic, Colliers reports that medical office space remains a hot target for institutional investors, which accounted for about 35 percent of buyers in the early part of this year, compared to 31 percent in 2020.

Renova said space in the building is renting at $25 per square foot, up from $20 to $25 per square foot a year or so ago. Kuperstein says tenants must take a minimum ten-year lease because spaces are customized for medical specialties.

Comprised of individual practices, the office is a synergistic hub for referrals and cross-pollination of medical relationships.

“Patients don’t have to drive around town,” said Kupferstein. “If they are visiting a pediatrician and they need an oncologist, it’s all under one roof.”

“Medical buildings did well during COVID, unlike the general office market, which is challenged,” said Kupferstein. “They withstood the challenges. But sole proprietors have a lot of competition. They are competing against large group practices so it’s important to retain and attract new patients. Being in a upscale building is a helpful strategy to grow a practice.”