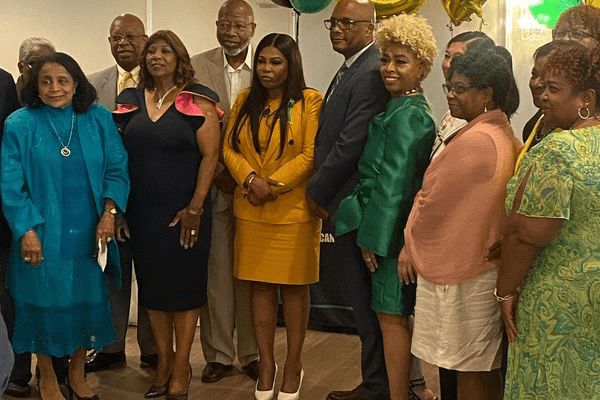 Dignitaries from Jamaica and Rockland County gathered last week at a “hastily” planned event at Nyack Seaport to celebrate the 59th anniversary of Jamaica’s independence and the 31st anniversary of JAMCCAR, a local organization that works to promote the island’s interests in the county and abroad.

But you would never have known this event, which included a buffet, proclamations, gifts (Jamaican rum), and a room packed with attendees, was planned only last week in a mere number of days. As noted by more than one, this Herculean feat was led by the boundlessly energetic Hope Wade, JAMCCAR’s president, fashion designer, and Nyack merchant. 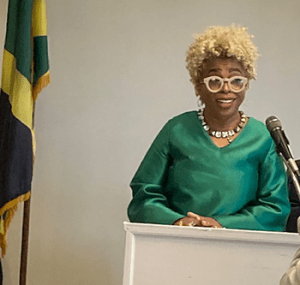 “This is a celebration of our island,” said Wade, decked out in a neon green dress, spidery black heels, and chic translucent glasses. “Our nation and are organization are stronger together.”

JAMCCAR, a nonprofit that offers networking and entrepreneurial opportunities to ex-pat Jamaicans and other members of the African diaspora communities in Rockland and the surrounds, has handed out more than $300,000 in scholarships to high school students over the past three decades. The event, flavored with a steel band and women wearing fabulous floral prints, hosted Alsion Wilson, Consul General of Jamaica, and Senator The Honorable Leslie Campbell, Minister of Foreign Affairs and Foreign Trade for Jamaica.

“We are on a quest to find good partners,” said Wilson, who proposed making either Nyack or Spring Valley “sister cities” with Kingston, Jamaica. There are 3,654 Jamaicans living in Rockland, roughly 1.1 percent of the population, according to the US Census Bureau’s 2019 American Community Survey (ACS).

Simon paid a moving tribute to the Jamaican anthem, which was sung after the American anthem.

The essence of the anthem “opens hearts to each other and to the world at large,” said Simon. “In this day and age, there is no real dedication to our fellow human beings. These words were meaningful to me.”

Hammond welcomed the Jamaican dignitaries with pride but paid a particular tribute to Wade, who opened Hope Wade Designs, a custom design atelier at 23 North Broadway in Nyack last February at the height of the coronavirus pandemic.

“We claim Hope Wade as part of Nyack,” said Hammond, emotionally. “She has been such a blessing as a new merchant. She has helped in so many ways. She has been one of those cheerleaders who have been holding each other up during this past year.”

Wade’s story is the successful Jamaican emigrant tale. She came to New York from Kingston, Jamaica in 1982 to study design and photography, ultimately earning a degree from Cooper Union on a full scholarship. Her dad, a policeman, and her mother, a teacher, had “certain expectations,” says Wade with a quick laugh.

“When I left, I had a new independence,” Wade said. “I grew my wings. But I also carried a nation with me. I come from the kind of community where everyone wants to know what you’re doing. Everyone’s watching.”

Wade, over the past four decades, has worked hard and struggled to get where she is today. After graduating, Wade worked briefly as a graphic designer in Manhattan. After losing that job, she made her way to Rockland County. She found a home at the Redeeming Love Christian Center in Nanuet and ultimately, a home-made dress for a New Year’s Eve bash sent Wade on her way.

“I couldn’t afford a formal dress and pay my rent,” she said. “So I made a blue taffeta dress with a circle skirt.” Everyone thought she bought the dress at Bloomingdale’s. Friends lined up to have dresses made for $50 a pop. Wade sewed 15 hours a day.

“At first I lost money on every garment,” she said. “It took time to build confidence.”

She’s come a long way in 20 years. Wade was one of the top three finalists in Project Runway: A Critique with Tim Gunn in 2015. Her work was shown on Pecha Kucha with Rosie O’Donnell, and her designs have graced the runways of London Fashion Week (LFW), New York Fashion Week (NYFW) and Caribbean Fashion Week (CFW), and been worn at The Gospel Traditional in Performance at the White House with President Obama.

In 2018, Hope became part of music history. The red flute dress designed she designed and worn by Academy Award Winner and Rock and Roll Hall of Famer Darlene Love was installed in the Rock and Roll Hall of Fame. The dress — six yards of iridescent silk with taffeta petals and rhinestones —worn by Love while performing on the David Letterman Show in 2014 is now on display in the Cleveland, Ohio museum as part of an exhibit called Stay Tuned: Rock On TV.

Wade, who turned 60 this year, bubbles with energy and excitement about the future. She feels optimistic about being a Nyack retailer and diversifying her merchandise to include more casual designs and jewelry. And she’s gearing up for the Second Annual Rockland Fashion Week at the Palisades Center on Oct. 24, which showcases local designers.

Looking forward, Wade is thinking about developing a small manufacturing operation where clothes are made from sketch to finished pieces.

“I want to be a mentor, a guide and a producer,” said Wade, who has become both a role model and an advocate for the Jamaican community. Wade is pretty sure the folks back home in Kingston believe she’s done them proud.