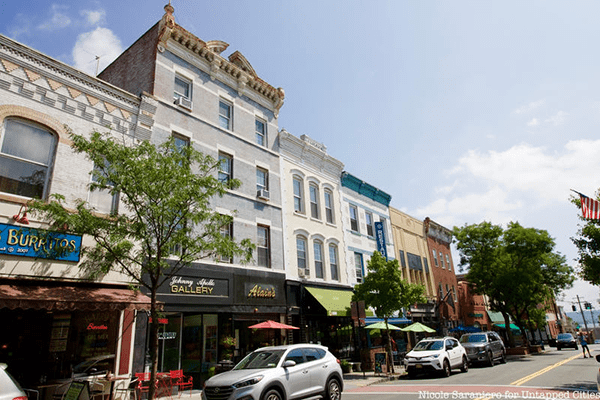 Long before the pandemic shuttered stores and hobbled businesses, the state of retail was in a state of flux. Big boxes and department stores were particularly hard hit, as evidenced by the attrition seen in Rockland’s major malls and along its commercial retail corridors.

Deep into the pandemic, there was a gloomy feeling that retail would never spring back; that retail centers and downtown would become ghostly and abandoned.

But there is reason to believe that such fears may have been overstated, particularly here in Rockland County.

In fact, retail seems to be experiencing a renaissance, albeit in unexpected ways.

“Locally, we are seeing the rebirth of main street,” said Michael Chang a commercial realtor with Rand Commercial.  “Landlords and tenants want to foster a sense of community.”

Chang believes one way for retail to grow is in clusters of local shops that are aligned in purpose and customers. Chang calls this his “node theory” of retail.

He believes landlords prosper when they curate a main street environment that brings shoppers and builds a sense of community with neighbors. In fact, the two are inextricably linked because shoppers build loyalty for retailers who are perceived to have a stake in their community.

Chang says there has been a spike in interest in retail space from non-traditional businesses that fit this node theory. He has been in contact with creatives with new ideas for art galleries, bespoke works, shared space, and startup food ventures; and he has heard from large companies that want to support community retail by developing “sub-branded” stores to serve a more local audience.

The Mall of America covers almost 100 acres, enough to fit seven Yankee Stadiums inside.  While having a wide variety of stores available in one large space might be convenient, the mall shopping experience can be impersonal and uninspiring. Ironically, it is malls that decimated Main Streets over several decades. Perhaps what goes around comes around.

Clarkstown and Pearl River are aiming to foster the node theory of retail with central shopping districts around train stations. Clarkstown’s updated Comprehensive Plan “recommends diverse mixed-use development in all of the Town’s Hamlet Centers that supports walking, biking and transit use. The plan also promotes the construction of low-energy buildings, reducing automobile use and creating vibrant “downtowns” with a mix of residential, business and retail uses. Similar to the changes called for in other areas of the town, Hamlet Centers should be zoned in a manner which permits a range of uses, and consideration of new commercial trends and uses must be taken.

To get more information on trends in retail or the commercial real estate market as a whole, Michael Chang can be reached at michael.chang@randcommercial.com