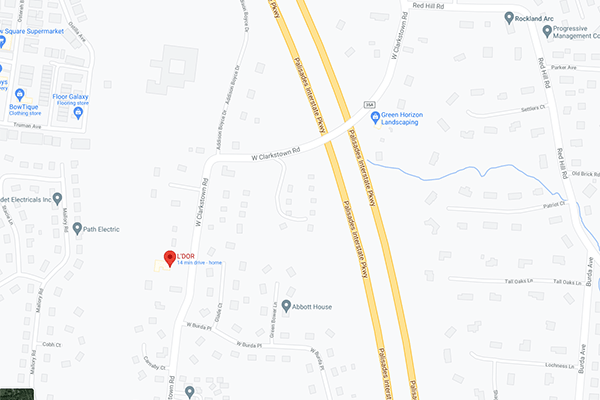 Before the Clarkstown Planning Board last week greenlighted a development project on West Clarkstown Road, a handful of citizens urged board members to take into consideration a raft of proposed projects on that road and their universal impact to traffic, sewer, water, and other environmental issues.

The Planning Board did not discuss the road as a whole but granted preliminary site plan approval for the demolition of the existing L’Dor Assisted Living Facility at 156 West Clarkstown Road, and the construction of a new 40-unit, two-story replacement property. L’Dor plans to reduce the size of the building by 4,000 square feet from its original of 34,844 square feet.

The proposal now goes to the Architectural Historic Review Board (AHRB) for review.

Community members are worried about at least six development projects pending on the mostly residential byway that is also County Road 35A, which connects New Hempstead Road and New Clarkstown Road, on the western edge of Clarkstown bordering the Town of Ramapo.

Concerned neighbors mentioned the proposed construction of Emerald Estates II, a 10-house subdivision behind the L’Dor property that will exit onto West Clarkstown Road. This property is located on 8.3 acres on R-15 zoned land.

Residents say they already have trouble exiting driveways from their residential properties.

On the town map, West Clarkstown Road is designated as a “secondary county road,” which means that the county is responsible for its maintenance and is a “street serving to connect major roads with each other.”

Senior housing is permissible on West Clarkstown Road, according to the town code, provided the lot has 300 feet of frontage along the road.

The most visible site that would undergo transformation is the former Champion Day Camp site at 175 West Clarkstown Road, which had most recently been operating as Camp Merockdim, an Orthodox Jewish day camp. Rockland County developer Gabe (Gavriel) Alexander is under contract to buy the 9-acre parcel in New City. Alexander has filed a memorandum of executory contract with the Clerk of Rockland to purchase the land from RW 175 Realty LLC in Pomona.

The memorandum secures Alexander’s right to purchase the parcel at 175 West Clarkstown Road through Oct. 4th, 2021, with a one-time one-month extension.

Alexander is proposing a three-story, 200,000+ square foot building with 144 senior housing units and 300 parking spaces, which will exit directly onto West Clarkstown Road.

Worried neighbors also pointed out a proposal to build a private school at 31 and 41 West Clarkstown Road near New Hempstead Road in New City. The applicant Congregation Kollel Lomdei Shas in Spring Valley, which wants to develop the property under the name 31 W. Clarkstown LLC, plans to demolish two single-family homes, combine the lots, and construct a 37,495 square-foot private school for 600 student (K-8) and 50 parking spaces on 6.6 acres of R-40 zoned land. The plan also calls for at least 15 school buses. Schools are a permitted use in R-40 zones.

The ASHAR (Ashar Adoph Schreiber Hebrew Academy of Rockland) School on New Hempstead Road wants to build a 2,640 square foot one-story addition to the K-8 school with 17 more parking spaces. Neighbors are worried the expanded space will increase traffic to the area at the intersection of New Hempstead Road and W. Clarkstown Road. A traffic control plan from the applicant was submitted in October. The plan shows methods of easing traffic on Fridays with additional personnel to direct traffic, carpooling, and buses instead of pickups.

Also of concern is the future fate of the former Girl Scout Building at the intersection of 211 Red Hill Road and West Clarkstown Road. The property was sold to St. Mary’s Indian Orthodox Church of Rockland Incorporated for $690,000. The land is zoned R-40, which can be used for religious purposes as a permitted use without a special permit.