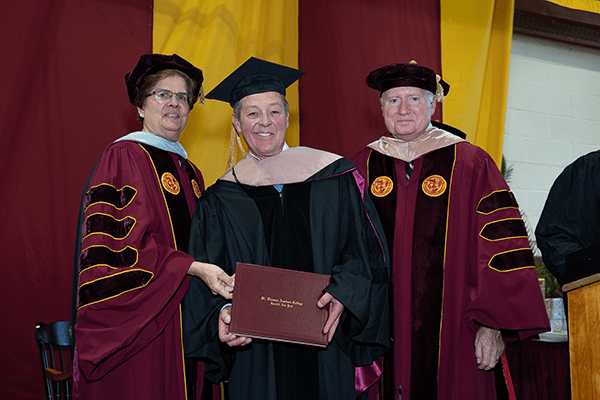 $50,000 Fund, Named In Honor of Retired President, Will Assist Students With Financial Hardship

PEOPLE IN THE NEWS

A local businessman who learned most of what he knows “on the street” found refuge and comfort in academia after he became a financial success. Now he’s ready to make it easier for students who need an economic lift.

William “Billy” Procida, president of Procida Funding and Piermont resident, has established the “Dr. William “Billy” Procida and Dr. Margaret Fitzpatrick, S.C. Scholarship Fund” in honor of Dr. Fitzpatrick’s retirement. The $50,000 scholarship fund, $20,000 of which has been funded to date, assist worthy students with financial needs and hardships to pursue their college degrees at St. Thomas Aquinas College.

Procida, in 2019, received an Honorary Doctor of Commercial Science degree from STAC. Procida founded his company in 1995 and has financed, fixed, and built more than $3 billion of buildings and companies. Procida funding is also a substantial lender to Nyack College, and Procida is owner of the Tallman Pool in Palisades.

Procida has a long-standing commitment as a builder to low-income families in New York and New Jersey. He personally funded the reopening of the Tallman Beach & Pool Club in Sparkill, NY which the state closed due to budget cuts. Earlier this year, he was named Rockland County Corporate Citizen of the Year.

Procida, who admits he was “scholastically challenged” as a student, and Dr. Fitzpatrick might seem like an odd couple, but upon meeting and forging a friendship, they agreed to create the scholarship fund to assist STAC students in covering the cost of their education, according to Procida.

“Dr. Procida and I share a commitment,” said Fitzpatrick. “We want students to have access to a quality college education through the excellent academic and career-oriented programs offered at St. Thomas Aquinas College. I am honored to join with Dr. Procida as he provides this scholarship opportunity.”

In 2019, Procida was given an honorary doctorate of Commercial Science from St. Thomas Aquinas College for his contributions to his community, his profession. and society.

“The honorary degree meant a great deal to me,” said Procida. “My business ventures sidelined my pursuit of a college education. I love STAC and look forward to continued involvement, starting with raising as much as I can for the scholarship fund.”

“Sister Fitzpatrick, the only nun who ever took a liking to me, honored me last year with an honorary doctorate degree! I figure honoring her and helping financially challenged and worthy kids was appropriate,” added Dr. Procida.

To contribute to the Procida Fitzpatrick Scholarship Fund, please contact either Linda LoRe at 845.398.4018 or Billy Procida at bprocida@procida.com.