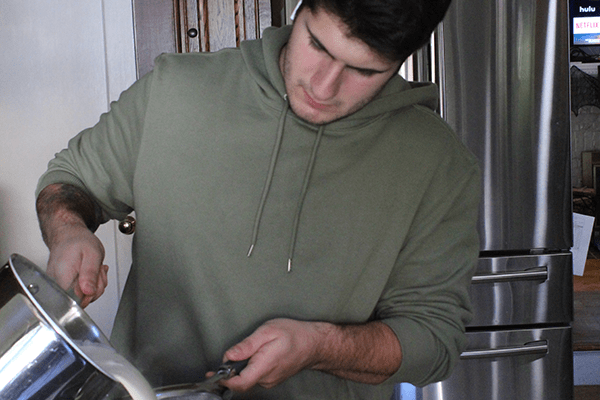 In early winter, when the world was still familiar, St. Thomas Aquinas College Junior Daniel Dominguez was preparing to launch his home-made ice cream at the St. Patrick’s Day parade in Pearl River. A hospitality student at STAC, he’d been encouraged and mentored by his professor Angela McDonnell and Pearl River’s Gentle Giant owner Matt Worgul.

By March 17th, aspiring entrepreneur Dominguez learned a critical lesson about business: Be agile and ready to pivot because unforeseen circumstances can always detour plans.

“The pandemic put the breaks on my plans,” said Dominguez. But it presented a different kind of opportunity: it sent Dominguez back into the kitchen for more R&D on his ice cream recipes and it opened his world to a Westchester incubator that mentors startup entrepreneurs.

“I’ve learned a lot about crystals – they have to be as tiny as they can be to improve the texture. I’ve spent my time getting recipes to peak performance.”

In addition to his STAC course load, Dominguez has enrolled in the free fall/winter entrepreneur accelerator Ossining Innovates! (OI), a joint initiative of HVEDC’s partner, Ossining Innovates!, and the Women’s Enterprise Development Center (WEDC),  a non-profit organization that helps women and minorities start, strengthen and succeed in business.

The fall/winter 2020 cohort begins in mid-October 2020 (applications open on a rolling basis) starting with 17 weeks of guided classwork, mentorship, and community. The class will meet weekly in a virtual setting on Thursday evenings. Additional open hours will be available during the week for support to participants.

“Danny is the first STAC student to attend this program,” said McDonnell. “I’ve been working closely with him to develop his ice cream business. This program is open to anyone with a good entrepreneurial idea.”

Dominguez, 20, from Lynbrook, Long Island, has always had a taste for the entrepreneurial life. His whole life he’s watched his grandfather and father run a construction business. “Abuelo,” as he refers to his grandfather, emigrated from Spain and built El Sol Contracting, which builds bridges and highways.

“The pandemic put the breaks on my plans,” said Dominguez.

“If he can build something, why can’t I?” Dominguez muses. “He’s 67 but I’ve never seen him sit still. He’s always in motion. And he’s pushed me forward to chase my dreams.”

The young entrepreneur spent a lot of time in the kitchen with his mom. While surfing the internet during sophomore year in high school, he found something he wanted for his birthday: an ice cream maker. That gift set in motion experiment after experiment to perfect ice cream recipes.

But it wasn’t until a year ago that Dominguez decided to make the building of Daydream Creamery a true career path. At first, he wants to get a cart; then eventually open one or more stores and grow a brand that connects the association of ice cream and good times with family. Which Dominguez knows a bit about.

“When we were young, me and my two older sisters would visit Abuelo at this house and he would fill three hand-painted bowls with our names on them with ice cream.”

Over the years, the ice cream creator has been serving up his recipes for friends and family – encouraged by smiles and joy. Because he lives in the dorm, his mom’s kitchen is still his ‘factory’. One weekend he hauled three tubs of ice cream from Long Island to his classes as STAC in packs of ice.

Dominguez says he sources locally for milk, eggs, and heavy cream. He admits he hasn’t made anything “that’s my own yet” but hopes it’s only a matter of time. He’s  working on a fried ice cream popsicle stick.

The pandemic has caused untold hardship for creators but many agree the “found” time has been a gift. Rather than gearing up to trot out his wares, perhaps too soon, Dominguez retreated to the kitchen to learn more about the science of making ice cream. “I’ve learned a lot about crystals – they have to be as tiny as they can be to improve the texture. I’ve spent my time getting recipes to peak performance.”

Dominguez has his plate full: his STAC classes, OssiningInnovates!, and the work that’s needed to launch Daydream Creamery. But a lifetime of good role models combined with impressive self-confidence will propel Dominguez forward. RCBJ will scoop the story when his ice cream endeavor begins serving. Watch this space.