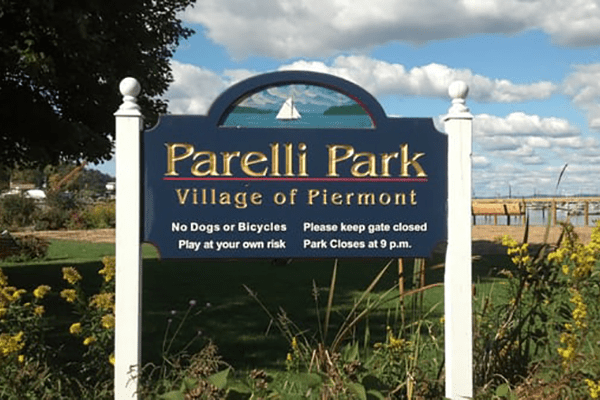 Village Board Waives Restrictions On Commercial Activity In Public Parks

Recognizing the value of having a vibrant farmers’ market in Piermont, the Village Board on Tuesday voted unanimously to allow businesses to use Parelli Park for commercial use.

“The market will be able to open on Sunday at Parelli Park by resolution tonight,” said Mayor Bruce Tucker.

The Sunday farmers market will take place in Parelli Park from 10 to 3, resolving a two-week debate over where the market should operate after a local restaurateur complained about its Flywheel Park location.

In a special meeting held by Zoom, market organizer Joe Serra requested the move after being told two weeks ago the market can no longer be located in Flywheel Park. Since early May, the market, which in previous years had been held in the compact parking lot of the M&T bank, relocated to Flywheel Park in order to accommodate the need for social distancing during the coronavirus lockdown and through the state’s reopening, known as Forward New York.

Viewing the predicament as urgent, Tucker sought advice from Piermont Village board attorney Walter Sevastian on passing a resolution that would allow commercial activity to take place in a public parks during these unprecedented times in which the Forward New York reopening phases continue to call for social distancing.

“It’s not unreasonable, while these orders are in place, to waive a provision of the law,” said Sevastian.

Board trustees agreed, saying “Look at what we’ve done for the restaurants,” referring to the village’s move to close streets to traffic to allow restaurants to extend their outdoor dining into the streets.

Trustee Richard Burns pointed out that Parelli must be available now for any commercial use to any business, not just the market.

The board told Serra he will need to provide insurance, sanitary cleanup, and a fee of $100.

The resolution also states no more than one business can operate in the park for up to six hours per day.

Parelli Park is a scenic green space with Hudson River views and it is close to parking in the M&T Bank lot, as well as near the library lot. Flywheel Park has been a phenomenal success but Serra said Parelli is the second choice.

“Parelli is not as robust as Flywheel but in terms of choices, it’s the next best,” said Serra.

Goswick Pavillion had also been considered though it would have met with the same legal challenges and some residents along Paradise Avenue had lodged complaints about additional Sunday traffic.

Flywheel Park had allowed the 14 or so vendors to liberally spread out and for patrons to line up while maintaining safe distances. By all accounts, the market has been a resounding success for vendors and brought the village to life while people tentatively re-emerged from their homes.

Use of Flywheel Park had been granted at no cost to the farmers market by Phil Griffin, owner of Piermont Landing Association, which owns the green square. Serra said he offered Griffin payment at the start of the market but the landlord refused. The location, smack in the middle of the village, has brought up to 1,400 people a weekend.

But in recent weeks, the owners of Confetti Ristorante & Vinoteca, complained about market traffic curtailing parking for his customers. Griffin told Serra the market must go. The Village has cordoned off public roads to allow restaurants to put tables in the streets, including the street outside Confetti. Attempts to resolve the issue over parking failed.