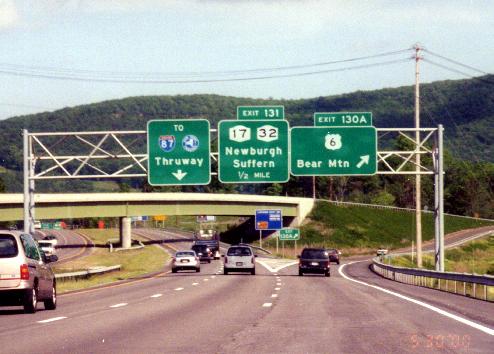 A coalition of more than 100 business, civic, political and labor industry reps are calling for New York State to spend a total of $500 million to expand the existing Route 17 in Orange and Sullivan counties. Specifically, the organization is calling for a multi-year plan to construct a third lane in each direction from Harriman in Orange County to Monticello in Sullivan County.

The 17-Forward 86 coalition says the expansion is needed to accommodate new development, which is expected to have a significant impact current on the roads.

The 17-Forward-86 coalition is lobbying for lawmakers to spend $500 million to create a third lane each way on Route 17 from the Exit 131 Harriman interchange to Exit 103 in Monticello. Route 17 in that approximately 45-mile corridor is already heavily traveled and congested with the highly popular Woodbury Common Premium Outlet to the south in Central Valley and the new Resorts World Catskills to the north in Sullivan County.

New development is on the horizon in the region, as recently reported in RCBJ.

“Expanding Route 17 is vital to the quality of life and the economic well-being of the Hudson Valley and Sullivan Catskills,” said Maureen Halahan, president and CEO of the Orange County Partnership. “It will strengthen the region’s economy by improving access for tourists and businesses, while enhancing commuter safety and reducing environmental damage from vehicular emissions caused by idling motorists.”

The group is lobbying state lawmakers and Gov. Andrew Cuomo to include the project in NYSDOT’s Five-Year Capital Plan. The proposal would have the state DOT earmark $100 million each year toward the construction and completion of the third lane Route 17 project.

“Once complete, this project, by a very conservative estimate, will have an economic impact of $1.5 billion on the region,” said Marc Baez, president and CEO of the Sullivan County Partnership for Economic Development. “With the Resorts World Casino and other investments in Sullivan County, this project is critical to our ability to thrive.”

Construction on the Route 17 expansion project will not likely begin until 2020 or 2021, although some 17-Forward 86 officials believe Gov. Cuomo could expedite the project as he has done with other major infrastructure programs in the past.

At present, work is underway on a nearly $150-million project to improve Exit 131 adjacent to Woodbury Common Premium Outlet. In addition, Legoland New York is expected to undertake approximately $40 million in roadway improvements, including a new Exit 125, that will provide access to the theme park and other adjoining properties.

The 17-Forward 86 coalition was successful in having New York State fund $5 million toward a New York State Department of Transportation Planning and Environmental Linkage study of the Route 17 corridor and to determine priority projects and conduct environmental assessments on engineering on those project that should be funded. According to Michael Lawler, a spokesman for 17-Forward-86, that study should get underway this spring and be completed in 2020.