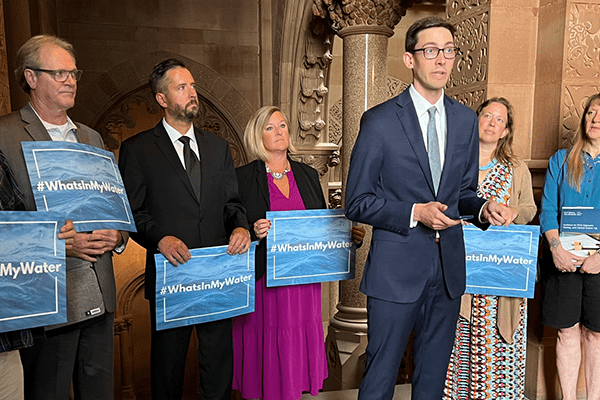 Advocates Say New York Should Lead The Pack On Environmental Standards, Or At Least Live Up To Some Other Progressive States Like Rhode Island, Massachusetts, and Maine

A group of area environmentalists is making a final push for New York State to set more rigorous standards to protect drinking water in Rockland County, the Hudson Valley and beyond.

They are calling on the state to match or overtake stringent standards set by other states including Rhode Island, Maine, and Massachusetts, pointing out that New York state has always taken a lead on environmental protection and that residents have shown their support for higher standards through the recent passing of the New York State Environmental Bond Act, the statewide referendum that passed in November.

Acceptable levels of PFAS and PFOS in drinking water determines when contamination is cleaned up and New Yorkers are directly notified about what’s in their water.

“We are urging the governor and the State DOH to strengthen proposed drinking standards,” said Director Robert Hayes of Clean Water at Environmental Advocates, speaking at a press conference on Monday. “The new drinking water standards will govern what gets cleaned up and when people are notified.”

“Technology can detect these chemicals down to around two parts per trillion,” said Hayes, “and that’s where we want to see the standards be set.”

Hayes said the proposed standards are not adequate to protect human health.

“Our coalition is trying to change this, otherwise water utilities won’t be cleaned up and people will continue to be exposed to toxins for decades,” Hayes added.

Environmentalists say that under DOH’s proposed regulations, utilities serving several Hudson Valley communities, including Veolia in Rockland County, would not be required to clean up their water, leaving Hudson Valley residents at increased risk of developing serious illness.

PFAS exposure has been linked to thyroid disease, kidney and testicular cancer, low birth weight, and other harmful illnesses. PFAS chemicals have been detected at dangerous levels in hundreds of communities across New York.

Environmental advocates say at least 400,000 New Yorkers in the Hudson Valley are drinking PFAS-polluted water, but at levels below New York’s current or proposed standards. The list includes communities like Rockland County, Ossining, Peekskill, Croton-On-Hudson, and the Town of Newburgh. This data is based on an Annual Water Quality Report analysis from a dozen Hudson Valley communities that have detected PFAS in their water.

“To think that we wouldn’t be establishing the strictest standards is shocking,” said Zebrowki. Rockland County has unacceptable levels of toxins. The water company (Veolia) is in the process of remediating. But we are demanding standards that match environmental leaders. We should be leading the nation.”

RCBJ reached out to Veolia but a company spokesman declined to comment.

In June, the federal EPA released health advisories for two PFAS chemicals, PFOA and PFOS, declaring there is no safe level of exposure to these “forever chemicals.”

Environmental advocates say the DOH failed to propose lowering New York’s drinking water standards on PFOA and PFOS of 10 parts per trillion (ppt) each, which are hundreds of times higher than EPA’s advisories.

“EPA has based their determination on the latest science, and the Department of Health is not following that science,” said Hayes.

Pushback appears to center on the cost of bringing water facilities up to speed and higher water usage costs passed along to customers. Environmentalists argue the state is flush with monies for projects such as these and that New Yorkers through their support of the Environmental Bond Act want a cleaner standard of drinking water.

“If the draft regulations are adopted, many of Rockland’s contaminated wells would remain unfiltered for PFAS, leaving all of us exposed for decades to come to multiple PFAS,” said Kurtz. “It is time for a precautionary approach. We face a situation with PFAS chemicals that is similar to lead, mercury, and asbestos years ago: widely used, highly useful chemicals that nonetheless had to be strictly regulated because of their toxicity. It wasn’t until lead was strictly regulated that blood levels of lead began to drop precipitously. We can and must do the same with PFAS.”

For an ‘Everything You Need to Know About ‘Forever Chemicals’ explainer from Ecowatch, click here. EcoWatch was founded in 2005 as an Ohio-based environmental newspaper, today it is a digital platform still dedicated to publishing science-based content on environmental issues, causes, and solutions.

The public comment period recently closed on December 5 on DOH’s proposed regulations. Adoption of the regulations is expected sometime in the first quarter of 2023.