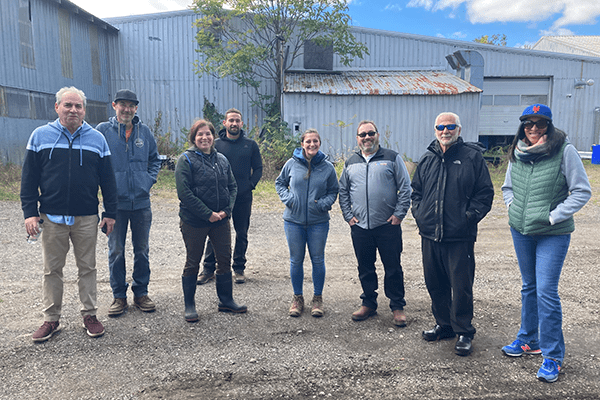 Scott Ugell, a veteran lawyer and town justice for the Town of Clarkstown, and a village attorney for Blooming Grove in Orange County, has spent decades in robes and in courtrooms adjudicating justice.

Now, part-time, the judge is changing up his robes for overalls as he learns the ropes for cannabis cultivation on a farm in Orange County. Year one showed promise but the jury is still out on how, and how quickly, the cannabis industry in New York will take hold and flourish.

But there are reasons to be optimistic, based on evolving New York State laws that will give cannabis growers more latitude.

“In a sense, cannabis can be looked at as a way to save family farms,” said Ugell

Ugell’s company Green Justice LLC has struck an agreement with a farm in Warwick that has been growing hemp, onions, and other vegetables for decades. He can lease up to 50 acres to cultivate the plant but he’s been curtailed so far by state laws to keep the growing footprint to one acre. The 300-acre farm run by a third-generation farming family, like others in New York, is experimenting with cannabis cultivation because it has the potential to become a significant industry over time. Farms upstate and nationwide are under increasing pressure to maintain agricultural continuity rather than sell out under development pressure.

“In a sense, cannabis can be looked at as a way to save family farms,” said Ugell. “Crops like hemp, and now cannabis, add income, which gives farmers more opportunity to produce and upgrade their farms.”

In 2022, Green Justice harvested 2,000 pounds of cannabis from 12,000 plants grown on one acre. The crop will be converted to cannabis oil rather than sold to the retail market. There are no legally operating cannabis retailers in the Hudson Valley. To date, 36 retailers have been given provisional licenses, though none in the Hudson Valley due to a pending lawsuit in federal court filed by a Michigan-based operator who was denied a license and is challenging New York State’s requirement that only state residents are eligible for licenses. New York’s Office of Cannabis Management (OCM) has asked the federal court overseeing the case to modify the injunction and allow it to issue retail licenses in the Hudson Valley. Cultivators, processors and hopeful retailers in the area are all affected by the court injunction.

But Ugell says he’s expecting the laws to make growing cannabis more favorable to farmers like himself who’ve invested nearly a $1 million to get farms up and running, and have hired crews to do the work.

OCM has recently proposed changes to its regulations creating different tiers of cultivation licenses depending on whether a farmer is growing indoors or outdoors. Cultivators will be divided into categories based on the size of the cultivation canopy – the area where mature plants are grown. The state plans to divide the categories based on such factors as whether the plants are grown outdoors, in mixed light, in a combination of outdoor and mixed light, or indoors. Within each of these categories, there will be additional license tiers based on the amount of square footage ranging from less than 5,000 square feet and up to 100,000 square feet.

In an effort to create a healthy economic ecosystem for the cannabis industry, New York State’s regulations limit the holding of a license to one category: you can be a cultivator, a processor or a retailer, but only one of the three.

Public comment on the issue is open until mid-January, and OCM will likely take action in the spring.

So how does a long-time legal mind end up with muck on his boots and the pressure that comes with depending on nature for success?

The simple answer is crabbing and the pull of the bay growing up on Long Island.

Ugell, 63, is itching to spend time communing with nature, to be the Tom Sawyer of his childhood again.

“I’ve been sitting behind a desk for 40 years,” he said. “I’m getting older. I want less stress, less conflict. Being outdoors, putting my hands in the dirt, this feels like an extension of childhood.”

Ugell isn’t under any illusions about the challenges of farming. This past summer, he worked alongside a crew of farmers in 90 degree weather on weekends planting seeds, watering, picking bugs off plants and running lunch errands.

“I did everything,” he said. “I needed to show everyone I was willing to get my hands dirty.”

Despite the severe drought, Green Justice produced a bumper crop because it was able to rely on an aquifer for water and a watering system for plants in pots. As winter sets in, Ugell will continue to bone up on the industry, gear up for another season, and think about playing Oliver, with a modern twist on “Green Acres” farming. For those too young to get the reference, check your streaming options.