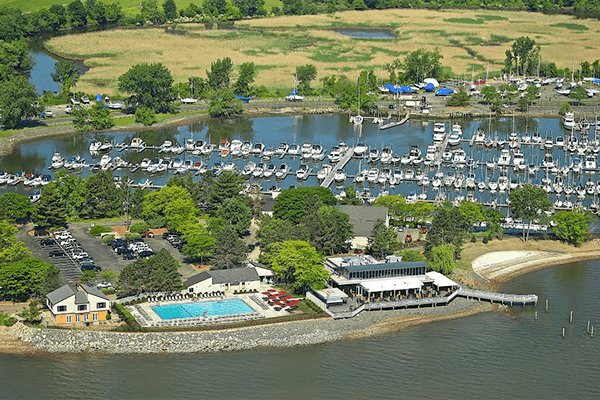 The Hudson River marina operator at 600 Beach Road has filed an application with the Rockland County Industrial Development Agency (IDA) seeking a bevy of financial incentives to help them with the purchase of Safe Harbor Marina from the Town of Haverstraw.

Safe Harbor has agreed to purchase the 58-acre, 1000-slip marina property from the Town of Haverstraw for $14.1 million dollars, according to a letter written to the IDA by Safe Harbor attorney Michael Zarin of Zarin & Steinmetz. The letter is part of an application Safe Harbor sent to the IDA in October.

SHM Haverstraw, a Delaware LLC, has been operating the marina since 2019; Haverstraw Marina Corporation operated the waterfront property from 1977 to 2019. Safe Harbor Marina operates scores of waterfront facilities nationwide.

The marina sits at the widest part of the Hudson River in a sheltered deep-water cove in the Village of West Haverstraw. It is an avid draw for cruisers and sailors. Safe Harbor provides boat brokerage services through Brewer Yacht Sales, which the company acquired in 2017. Brokerage services are also provided through Great Hudson Sailing Center, which offers private and group sailing lessons taught by Coast Guard licensed captains. Beyond the marina-related services, Hudson Water Club operates on site.

Safe Harbor’s proposed purchase, instead of continuing to lease and operate the marina from the Town of Haverstraw, includes $35 million in improvements, which includes 23,000 square feet of new construction estimated at $3.3 million, and another $23 million for reconstruction and renovation work on deteriorated and failing bulkheads and replacing the wave screen surrounding the marina. The upgrades also include reconfiguring floating docks to allow additional and safer navigation at the marina.

Another $7 million would be spent on equipment, professional fees and other soft costs.

Companies like Safe Harbor approach the IDA to secure sales and use tax exemptions as well as PILOT (payment in lieu of taxes) programs. Others also seek mortgage tax abatements, but Safe Harbor’s application says it will not be utilizing mortgage financing to acquire the property — it will self-fund the acquisition. The company filed an application with the IDA on Oct. 17. It was scheduled to hold a public meeting on the application earlier this month but the IDA said the applicant asked for more time.

Safe Harbor is seeking nearly $2.4 million in sales and use tax exemption on an estimated investment of $28 million. The company plans to spend $28 million on goods and services that would have been subject to state and local taxes. The exemption, based on 8.375 percent sales tax, represents a $2.375 million savings to the company and related loss in sales tax revenue to the county and state.

Safe Harbor is also seeking a PILOT program, which would relieve some of its burden on property taxes. The current property taxes are equivalent to $382,359 annually, based on Safe Harbor’s leasing agreement with the town.

The IDA typically awards benefits to companies that create jobs. The applicant has reported in its documents it intends to add four full-time positions and six part-time positions.

Safe Harbor says in its application that the project qualifies for financial assistance because it is “a tourism destination,” which under New York Law is defined as “a location or facility which is likely to attract a significant number of visitors from outside the economic development region.”

RCBJ reached out to Safe Harbor Regional Vice President Doug Domenie, but he declined to comment on the application or acquisition of the marina.