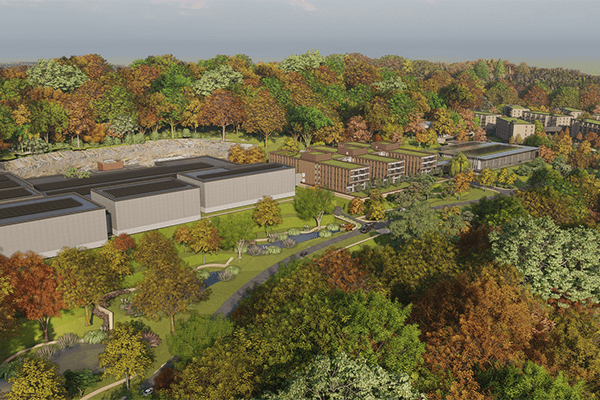 Plans by the Watchtower Bible and Tract Society of New York, Inc. have scaled what could be their greatest hurdle in moving toward building a facility that will become home to a working, living, and worship facility for members of the religious order.

The Town Board of Ramapo last week adopted a zoning amendment that essentially green-lights the proposal to develop a mixed-used camp on Sterling Mine Road.

In September, The Town of Ramapo Town Board accepted a Final Environmental Impact Statement (FEIS) on the proposed development more than two years after the original draft environmental impact statement was presented to the public for the Watchtower’s new World Headquarters.

The Watchtower Bible and Tract Society of New York, Inc., (Watchtower) plans to build a ground-up facility for the creation and production of audio and video/film recordings in an integrated working, living, and worship facility for members of the religious order known as the Worldwide Order of Special Full Time Servants of Jehovah’s Witnesses.

The project required passage of a new mixed-use MU-3 Zoning District and amendments to the Town of Ramapo Comprehensive Plan. The zoning amendments rezone the portion of the project site within the Town of Ramapo to a new MU-3 Mixed-Use Zoning District to permit the applicant to develop an integrated residential and commercial campus. The previous zoning was RSH, Specialized Housing Residential.

Additionally, new definitions have been added to the Town Code for Integrated Residential and Non-Residential Campuses, Open Space, and Ridgeline Protection.

The new code defines the MU-3 development as “An Integrated Residential and Nonresidential Campus development wherein the residential, office, institutional, and accessory uses are integrated in a campus setting comprising one or several adjacent tax lots under common ownership.” Developments within the MU-3 district must comply with the special permit requirements established for that district.

Incorporated into the new code provisions are definitions and limitation in the new “Conceptual Development Special Permit” which are modifiable by the Town Board.

“As a result of last night’s zoning change, Jehovah’s Witnesses will now seek Site Plan Approval with the Towns of Ramapo and Tuxedo,” said Jehovah’s Witnesses spokesman Keith Cady. “Additional specifications and innovation details regarding the proposed project can be found at www.jw-avcenter.org.”

The proposed facilities will include offices, maintenance and set production workshops, and a central chilled/hot water plant with geothermal heat recovery system. Accommodations for resident staff include 645 residential units (545 one-bedroom and 100 studio units) for up to 1240 residents all of whom would be working at the site, dining/assembly spaces, recreation/wellness/fitness facilities, and a clinic.

Residents of the A/V Production Center, including members of the Order and temporary religious volunteers, will be adults. As there will be no school age residents on site, the proposed development should have no impact on local schools, the Order says.

“This will reduce the impact on energy infrastructure compared to the previously approved plans submitted by the prior developer,” said Cady, who added that the project managers will work closely with New York State Energy Research and Development Authority (NYSERDA).

The project also includes a Visitors Center, which would give the public access to the campus and offer Bible-related exhibits as well as exhibits on the activities of Jehovah’s Witnesses. The final plan would incorporate a public walking trail to run parallel to the former Sterling Mine Railroad corridor.

The proposed Landscape Master Plan includes 9,467 new trees, 26,544 new shrubs, 490,000 square feet of lawn, and 1,315,000 square feet of wild grasses. According to the FEIS, the planting plan will be designed to maximize its ecological richness, biodiversity, biophilic and education attributes.