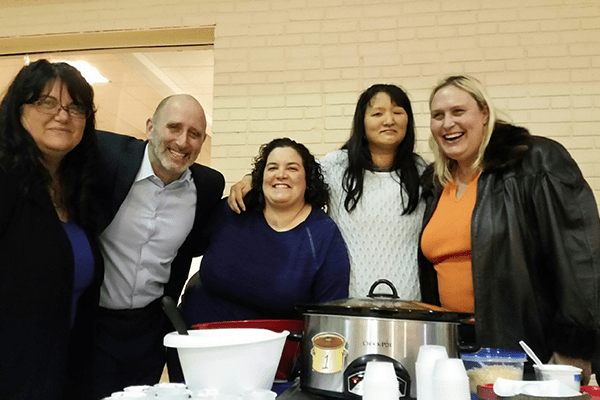 Dain, Founder of Advocate Homecare, To Receive Champion of Hope Award on Nov. 17 At Manhattan Gala

Early impressions count. As a young boy in the 1970s, Barry Dain’s synagogue took youth groups to visit Letchworth Village in the Town of Haverstraw, the former psychiatric hospital. Scenes of people walking around in robes, in their underwear, sometimes naked, seared in his memory. Rows of cots stuck with him. The vacant expressions, the hopelessness, the filth.

“I knew even then something was not right,” said Dain. “I think I might have known then that I’d spend a lifetime championing for inclusion and normalizing the lives of people with disabilities.”

Three decades letter – and a lifetime spent listening to his calling – Dain is being recognized by the Brain Injury Association of New York State (BIANYS) with the Champion of Hope Award at the association’s Journey of Hope Gala at Midtown Loft & Terrace in Manhattan on Nov. 17

The Champion of Hope award, soon to be renamed in his honor, recognizes an individual who has shown dedication and leadership in supporting individuals with a brain injury.

Dain, who is the president of Advocate Homecare in Fishkill, has been both an advocate and trailblazer for the brain injury community.

“All that Barry has done and continues to do is part of his passion to assist and provide support to those impacted by brain injury,” said Eileen Reardon, executive director of BIANYS. “We look forward to honoring him at the Journey of Hope Gala.”

Dain, 55 of Suffern, has had to innovate and think outside the box in order to achieve what he’s done. The honoree recalls his first summer job as an undergrad at Rutgers University where he worked with children with autism.

“We worked with serious cases, kids that would bite and kick and throw themselves on the floor, but they still deserved to go to the ice cream parlor or a museum or to a park,” said Dain.

Shortly after graduating, Dain worked for Rockland ARC as a direct care counselor. He recalls suggesting that the organization take clients with disabilities to Rockland Lake.

“So we get into the van, about 12 people, and we drive around the lake,” he said. “I was so upset. I went to my supervisor and said, ‘this isn’t fair.’ These people had the right to get outside the van. I think my long career in advocacy started right there.”

Shortly after this eye-opening experience, Dain worked through ARC and OPWDD  (Office of Persons With Development Difficulty), to open the first individualized Residential Alternative in Nyack for people with traumatic brain injury. Three years later, he steered the creation of the first structured day program for the same cohort. And in 1998, in collaboration with Helen Hayes Hospital, Dain facilitated the BIANYS Brain Injury Support Group.

The journey for people with traumatic brain injury must be a journey of hope, Dain believes.

“These individuals had a life, just like you and me, and in an instant, it’s taken away,” said Dain. “All they want to do is get back to what their life was. But TBI forces people to accept who they have become. This is a hard journey.”

Dain stresses the importance of healing toward the goal of independence, where possible.

“Working with people with TBI means helping them with meaningful relationships, to have a friend to go to the movies or coffee, or to have a home of their own, and a job. These are the big three: relationships, home, job.”

Over time, Dain opened a second independent living facility, citing research that shows integrating people with TBI into the community tends to promote a stronger and sometimes faster recovery. For several years, he ran a Rockland branch of Rehabilitation Specialists, a New Jersey company that focuses on community integration.

Bain sat on the Board of Directors for the Brain Injury Association of New York State since 2008 and was elected President of the Board in 2016, the position he held until completing his board service in June of 2022.

In 2017, after navigating frustrations with state funding, Dain took a leap of faith and founded Advocate Homecare Inc., day programs for individuals with traumatic brain injury, Alzheimer’s disease, and dementia. He was 50, married and two kids in college and “zero income.”

“This is my thing,” said Dain. “This is what I always wanted to do. It’s who I am. I had no other choice, not if I wanted to be happy.”

Forging his own path gave him freedom to serve a community his way, though the services are funded through New York State. Today, his company, which serves 100 people annually, has 20 people on staff and operates on a $1.2 million budget.

“Anything is possible if you believe in it,” said Dain. “You have to have faith in your vision, stick to it, even if you get knocked down every day.” Essentially the same philosophy imparted to those who are trying to recover from traumatic brain injury.”