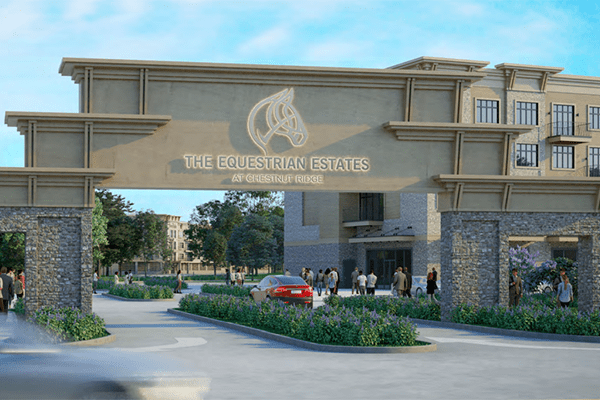 A project first presented to the Village of Chestnut Ridge Board of Trustees in August of 2020 has progressed to the presentation and acceptance of a Final Environmental Impact Statement (FEIS) describing in detail the scope of the project, the possible environmental impacts, and proposed benefits the development would create on this largely vacant parcel.

At a recent Village Board Meeting, developer Equestrian Estates LLC and its team submitted plans for the mixed-use project and for a proposed Planned Unit Development Floating Zone amendment to the Village’s zoning law.

The project development was done in coordination with the Village’s creation of it first Comprehensive Plan. It also requires the introduction and passage of a change to the Village Zoning Code to allow for the Planned Unit Development in a floating zone. 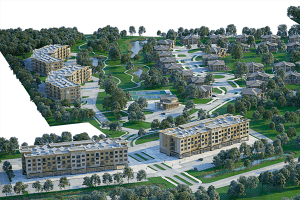 The plan outlines a vision for the southwestern area of the Village of Chestnut Ridge. The design envisions a hamlet community that incorporates retail development, multifamily residential and senior housing.

The 39.6 acres site will include 84 two-bedroom market-rate rental apartments; 62 market-rate four-bedroom duplex townhouse units for sale; and 118 Senior Housing rental units for a total of 266 residential units. Townhouse units will be at least 3,000 square feet, have front and back yards, and two-car garages. Overall density of less than seven units per acre would be permissible in the overlay.

Half of the senior housing rental units will be restricted to residents over age 55. The other half will be available to the general population. Community amenities include a clubhouse, tennis courts, basketball courts, walking trails, and a 1.9 acre preserved area of open space.

Market-rate rental apartments will be located over approximately 38,000 square feet of first floor retail/commercial space, and an additional commercial pad will accommodate a single-story building of up to 7,500 square foot.

The development includes a 4,000 square foot club house, which is provided for community recreational use by all residents.

According to the plan, the project would house up to 686 new residents, including up to 109 school age children.

To facilitate construction and address surface water concerns, developer is planning on relocating 755 linear feet of the stream that is located between Red Schoolhouse Road and the parking area. The majority of the wetlands on the site will remain undisturbed.

CUPON (Citizens United To Protect Our Neighborhoods) Chestnut Ridge had retained its own planner, Dresdner Robin of Jersey City, NJ to review the Draft Environmental Impact Statement and comment on perceived deficiencies in the plan. Dresdner Robin’s comments were addressed in the FEIS.

The project is located on the east side Red Schoolhouse Road and north of Loescher Lane.