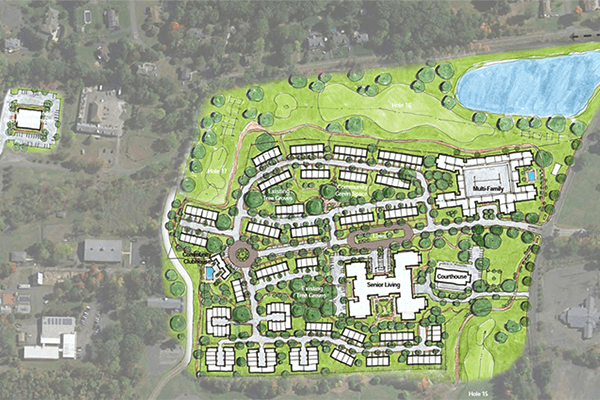 In 2021, a slim majority of Stony Point voters said no to a proposed development at Letchworth Village because they worried about the developer’s inexperience and because the rigidity of an already-negotiated contract to sell both the land and golf course left too little wiggle room for change.

Now a proposed development for the same site, which has sat fallow for 20 years with asbestos-filled deteriorating buildings, is again the subject of a referendum in the November election but this round is different. Voters on Nov. 8th will only be deciding if the town can sell roughly 30 acres of Letchworth Village in order to negotiate a contract with Hudson Park Group LLC of Westchester, which has signed a Memorandum of Understanding (MOU) with the town to build a multi-purpose housing development. The golf course is not included in the project this time around.

The MOU does not bind the town nor does it bind the developer; rather it gives both parties the ability to hammer out a suitable deal if the town and developer’s vision are in unison. The ballot question is simply asking voters to authorize the town to sell the land in the event that a suitable deal is inked.

“This is a very different project that has been handled in a very different way,” said Town Supervisor Jim Monaghan. “This project brings a lot of benefits to the town but there is a lot of flexibility and leeway to continue to negotiate so that Stony Pointers can get the best out of this proposal to rejuvenate Letchworth Village.”

The agreed upon purchase price is $3.1 million, which includes Letchworth Village plus six acres of adjoining land to both the east and the west, plus whatever expenses are incurred by the developer to renovate Kirkbride Hall, where a new courthouse will be located, to construct a new town recreation center on adjacent town-owned land, and to reconfigure two holes on the golf course. The negotiated price also includes the razing of eight asbestos-laden buildings at the developer’s expense.

The developer has proposed a flexible plan to build an estimated 450 market-rate units including townhouses, condos, multi-family, which include 170 assisted and independent senior housing apartments. The project as proposed does not include retail or commercial components at present but there could be opportunities for retail down the road.

A small band of opponents who led the defeat of Stony Pointer Raj Amar’s proposal to build a hotel and housing at Letchworth Village say they’d like to see a Roller-Rink, park or an amphitheater on the site. However, Letchworth has been crumbling for two decades and previous prospectors have rejected the site for several reasons including the cost to demolish the contaminated buildings, the site’s inaccessibility to major highways, and the town’s small population, which makes it difficult for retailers to justify the costs of building a retail hub.

Hudson Park’s proposal includes a raft of benefits to Stony Point residents including accessible open space, a newly built walking trail around Secor Pond that will link to Veteran’s Field and the dog park, a newly constructed 10,000 square-foot recreation center at Veteran’s Memorial Park, and housing for people wanting to downsize or for family members who need assisted living or memory-care facilities.

“The developer is willing to enhance open space for recreation,” said Monaghan. “This is something we can do for our children and for our seniors.”

All members of the town board have endorsed the project, citing a long-needed solution for the fallow lands and crumbling buildings that would cost nearly $1 million apiece to raze. A small group  opposing the project are pushing for taking down one building every year in lieu of a sale. They would like the opportunity to continue exploring other possibilities for the site but the town board believes a housing development makes sense and that the time is right, given a housing shortage.

“By the time we’d take down all the buildings, we’ll have spent nearly $10 million – far more than the property is worth,” said Monaghan.

Opponents say the developer is underestimating the cost of building a recreation center, along with a new courthouse and modifying two golf links, given rising construction costs. Hudson Park has estimated the cost to be around $2 million. Opponents say the town is obligated to reduce the purchase price to offset the cost overruns, but the Memorandum of Understanding only says that if the costs run higher than estimated, the contract price can be renegotiated, or either the Town or the developer can walk away before a formal contract is signed.

Residents can learn more about the project on Oct. 12 at 7 pm at Patriot Hills Golf Course when Hudson Park, a Westchester-based real estate development and investment firm, presents the plan and holds a question-and-answer session. The town has put up a link to the developer’s website with information on the project. The link is: https://hudsonparkgrp-stonypoint.com/

The town has long fielded proposals for Letchworth Village, though no developer has gotten much past the proposal phase. For some time, some Stony Point residents have held an anti-development sentiment but town officials believe the time is right to reap the benefits of building housing on a site that is under-utilized and that by remaining idle, will continue to cost the town for upkeep and maintenance. Although the building environment is challenging due to higher interest rates and supply chain issues, Hudson Park says it’s ready to move forward on building. The housing is likely to draw a combination of millennials and empty nesters, as well as those who need assisted living services and memory care, in a separate facility.

“We are designing Hudson Park Stony Point to offer a broad spectrum of housing options and price points so we can accommodate the market for empty-nesters and seniors residents,” said Hudson Park’s president Glen Vetromile.

The prior plan was especially controversial because it included the town-owned golf course; this one doesn’t. However, town officials say an influx of residents at Letchworth Village will be a boon to Patriot Hills Golf Course because the demographics align with the golf course’s patrons.

Also, town-based businesses  some of which are still struggling to rebound from the pandemic, will benefit from an influx of new residents who need goods and services.

Town officials also endorse this kind of housing because it places the least burden on schools and roads. At least a quarter of the development will house assisted living patients, and another half 55 and older — two populations that drive less than people in the height of their careers raising families.

“We need more residents in Stony Point to keep the town vital and alive,” said Monaghan. “We also need a variety of housing beyond single-family homes.”

A project of this scope will also create short-term construction jobs, and long-term jobs at the assisted living facility.

Monaghan has said he learned from previous experience that he needed town support for redeveloping Letchworth to move forward to negotiate the best arrangement for the residents and taxpayers. He believes that residents, this time, will support the project because he said there are multiple benefits to the town and its taxpayers that come along with this proposed development.