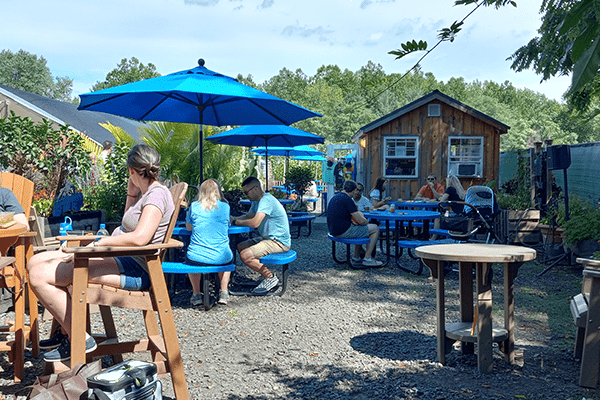 Cidery Attorney Says Business Has A Right To Operate At Its Location; Town Of Orangetown Disagrees

A Rockland County judge will have to decide the fate of a cidery in the Town of Orangetown because town officials and the business owners disagree on whether the operator has the right to serve hard cider to the public at its property.

Rockland Cider Works, which opened in August 2019 at Van Houten Farms at 68 Sickletown Road in Orangeburg, is wrangling to remain in business while it fights on three fronts: in a lawsuit it filed against the town, in a lawsuit filed against it by its neighbors, and in an administrative hearing to hold onto its state issued cidery license.

The cidery is the brainchild of Darin and Elisabeth Van Houten, who began to establish a hard cider distillery with bar service and music to supplement the family’s nursery business, which has long been in decline, they say. The couple envisioned a cidery – the kind of attraction that has helped boost tourism in upstate communities – as a strategic update to a nursery and garden center that had been around for nearly 50 years but had been losing customers to big boxes that undercut independent and local businesses. According to the New York State Cider Association, New York has more that 125 hard cider producers.

The new attraction gained traction, becoming a desirable refuge six months later at the height of the pandemic because it gave people a space to gather safely outdoors with friends, kids, dogs, and to listen to live bands in the garden outfitted with socially distanced tables for pandemic safety protocols. It seemed like a win for the business and the community except it became a noise and traffic nuisance to neighbors who began complaining about cars lining up and parking on the road, the din of activity, occasional lewd behavior, the presence of food trucks and a change of use that they say was altering the rural character of the neighborhood.

In the typical way that neighborly disputes begin with attempts to reach compromise and ping-pong Facebook commentary, this one has escalated into a legal battle on two fronts that is costing taxpayers, neighbors, and the business time and money to determine who is in the right.

At issue is whether the cidery is properly zoned for the manufacturing and commercial operation it is running. The town says the site is not compliant for food and bar service while the attorneys representing Rockland Cider Works maintain the zoning laws are “ambiguous,” and that the ambiguity should favor the cidery.

In a lawsuit filed in Rockland County Supreme Court in January, attorney Lino Sciarretta argues the cidery is allowed as “a commercial agricultural use” even though “cideries” are not specifically listed in the zoning code.

The town disagrees: Town Planner Jane Slavin denied Rockland Cider Works a building permit, saying it is not permitted as an “as-of-right” use. She further said “retail sales or restaurant use is not a ‘use or accessory use’ by right. A use variance is required.”

And because the town has deemed the cidery to be noncompliant, the New York State Liquor Authority is now considering revoking the cidery’s license – though Sciaretta has obtained a Temporary Restraining Order against the town from taking any further action until a judge renders an opinion on the case.

In the meantime, Darin Van Houten says without a liquor license, the cidery will be put out of business. He says Rockland Cider Works continues to operate and represents nearly 10 percent of the family business’s total revenue but the uncertainty hanging over their head is creating great stress.

“We don’t know what to plan for,” said Van Houten. “We need to move the business forward but with all these question marks, we don’t know what direction it will go in or how to move forward.”

Rockland Cider Works produces roughly 5,000 gallons of hard cider a year using apples grown on Dr. Davies Farm in Congers. Nearly 95 percent of production is used for single servings at the cidery though the operation also cans its products. The cidery has a few wholesale accounts including 76 House in Tappan and a sprinkling of New York City bars and restaurants.

In July 2021, the cidery opened a second location in Gilboa, New York, on the family farm where Elisabeth Van Houten grew up.

Darin’s roots trace back to the early 1600s. His grandfather started the farm in 1946. It became a farm market, garden center, and nursery in the 1970s. The company bought a large production farm in Pennsylvania where Van Houten grew up. He and his wife moved to Pearl River in 2018 to take the reins at the farm here. Van Houten Farms is owned by a trust that includes Darin, Elizabeth, and his uncle James. James’ son, Chris Van Houten, who is Darin’s cousin, ran the operation for nearly 40 years but was ousted when his younger cousin came from Pennsylvania to endeavor to revive it.

Chris and his wife Sharon, who live on the farm property, are among the group of neighbors who’ve filed suit against the cidery. Chris and Sharon are also in the appeals court over rights to their homestead on the farm property stemming from litigation between themselves and James Van Houten.

The plaintiffs in that case allege the cidery is violating the town’s zoning and building codes, creating a nuisance, and degrading neighboring property values. The suit seeks a temporary and permanent injunction against its continued operation. The suit claims that residents have requested relief from the town since March of 2021. They maintain the town has failed to enforce its own codes.

“It’s unfortunate it got to this point,” said Susan McWhinney, one of the plaintiffs. “We just want to have the neighborhood left intact. This has been divisive. It hurts all of us. It drives us apart.”

McWhinney said she and her partner Jerry Goggin, who live in an old stone house adjacent to the property, are bothered by industrial noise coming from the cider production, increased traffic around their driveway, and lighting.

In response to neighbors’ complaints and the pending litigation, Van Houten has suspended live bands and has cleared space aside the garden center to accommodate 120 cars but the fate of the cidery rests with the court, unless the cidery goes back to the town Planning and Zoning Boards with a new application.

Van Houten says he would not have filed a suit in the first place if the town had held a timely hearing on his request for a “text amendment” allowing the cidery to operate in the R-40 zone, and later a revised request limited to a provision for a “special permit” allowing cidery operations in that zone.

In the town’s response to the lawsuit, the town asked the court to dismiss the case, saying the cidery should have appealed to the Zoning Board of Appeals and that the case doesn’t belong in court.

Town Supervisor Teresa Kenny did not respond to an email requesting comment for this story.

The town’s response on the lawsuit is due Sept. 2; meanwhile the presiding Judge Robert Berliner is due to leave the bench at the end of September.