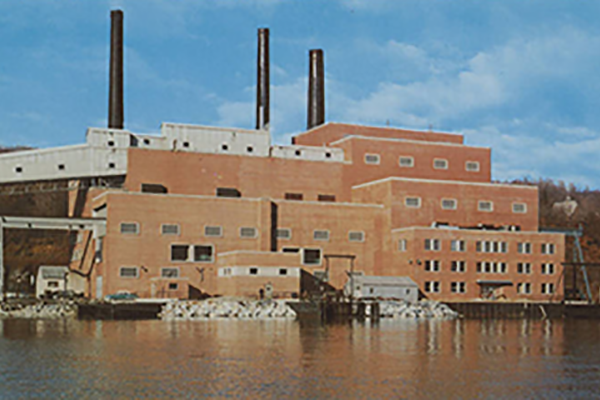 Stony Point’s eastern flank between the CSX Rail Line and the Hudson River is dotted with shuttered or barely operating industrial properties that remain under-utilized, fallow, and in most cases, on sites that are contaminated brownfields. All together the former Lovett plant, the Tilcon mine, U.S. Gypsum, and the former Kay Fries operations adds up to nearly 300 acres of land waiting to be put to a more productive use.

With that in mind, the Town of Stony Point is considering a local law that would add a “floating zone,” to its planning toolbox for brownfield sites that specifically lie between rail and water. The proposed legislation known as the “River & Rail Brownfield Redevelopment Floating Zone” (RRBR), if adopted, would be an amendment to the town zoning code.

“A floating zone is a zoning tool whereby you designate a zoning district, but you don’t map it,” said Max Stach, Stony Point’s Town Planner. “The law is designed to allow options for redevelopment of former industrial sites with river and rail access.”

Stach said the idea for floating zones evolved from discussions between the town and Lovett plant owners, which allowed New York State Department of Transportation to use its long-vacant property as a staging area or “logistics yard” during the building of the Mario Cuomo Jr. Bridge, and subsequently as a hub for the distribution of road salt.

But here’s the rub: even though the roughly 25-acre Lovett coal-fired plant in Tomkins Cove, shuttered around 2007, and is contaminated with the remnants of coal ash, the site is zoned “Planned Waterfront,” which permits a range of uses including marinas, housing, mixed use, fuel and oil storage, restaurants, waterfront recreation and more.

“Technically speaking, the site that was being used when constructing the bridge as a logistics yard would not have been allowed under the current zoning,” said Stach. “For sites like Lovett, a floating zone would allow this kind of use, and it would streamline the zoning process. We know that the ash from the old coal plant is still on that site, so it’s not usable for recreation or housing.”

Essentially, the floating zone proposal boils down to an being an incentive for landowners or developers to breathe new life into existing industrial properties, while mostly maintaining the footprint and taking advantage of rail or barge transport.

“We’re looking for low impact industrial uses that depend or rail or river traffic,” said Stach. “The idea is to put the properties back on the tax rolls, create jobs, add incentives for cleanups.”

The planning board introduced the proposal on July 12 at a Stony Point Town Board meeting.

In considering whether or not to “land” the overlay, the Town Board has to make certain that the proposed site contains at least 10 acres; that it was formerly used for intensive industry, mining or utility purposes and contains (or be perceived to contain) the potential for soil and groundwater contaminants; that the property has freight access to the river or rail; and that access to emergency services and adequate water and sewer are available on the site for both industrial and firefighting purposes.

A public hearing will be held on the proposed law on August 9 at 7 p.m. at the next town board meeting.

Stony Point’s taxpayers have been hit hard since the settlement of a $220 million lawsuit in favor of the Lovett plant’s former owner Mirant in 2007, the outright closure of Lovett only a few months later and a half-decade of devaluation and intermittent use of neighboring Haverstraw’s Bowline plant. The tax base provided by the two power plants had traditionally kept taxes low in Stony Point and Haverstraw. A proposal to build a $600 million trash-to-gas energy plant at a former brownfield on Holt Drive failed in 2017.

Both the Gypsum Plant and the Tilcon mine are “idling” says Stach, meaning they’re not entirely shut down but they’re barely operating.

The town planner points to the Tilcon mine: “They could continue to mine. They could walk away and let the mine fill with water and become a lake or they could use it for clean fill. There are a whole end-of-life opportunities for mines. But they also have riverfront docks and conveyers and if they wanted to do barge logistics to support maritime transportation, this is where the floating zone legislation can help by making it easy to start up operations.”