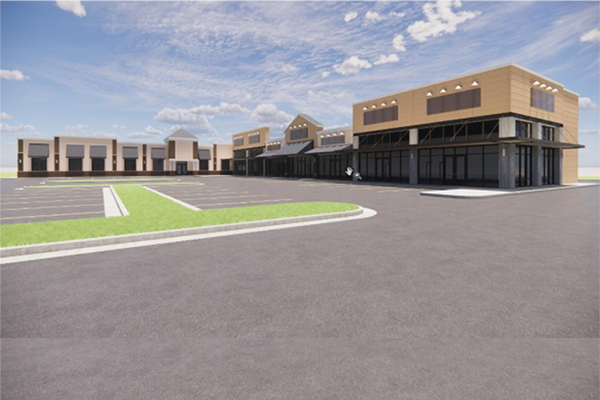 The Nanuet site once known for having the “best exotic entertainment in New York and New Jersey” is slated for a very different use. The recently demolished building that housed the Stiletto Gentleman’s Club at 180 Route 59 is seeking a more wholesome chapter via retail and childcare: essentially from a strip club to strip mall.

The proposed retail for the site faces a relatively easy approvals path in the Town of Clarkstown but the new property owners also intend to build a pre-school, which requires the issuance of a town board special permit.

The developer, who brought the application to the Clarkstown’s Technical Advisory Committee this week told town planners it wants to construct a 20,560 square-foot L-shaped building, with 12,122 square feet dedicated to the childcare center, and an additional 8,438 square feet for ground floor retail.

Kaneda Realty LLC sold the 3.1-acre property, situated due west of the Kohl’s Shopping Center, in 2021 for $1.85 million to Nanuet Properties LLC, the developer of the new retail center, who is also the franchisee. Mark Mathias of Scarsdale is both the managing member of Nanuet Properties LLC and the Lightbridge Academy franchisee. Mathias and his wife Vivian recently opened the Lightbridge Academy of Scarsdale.

Lightbridge Academy, an Iselin, New Jersey-based provider of early education and childcare, opened nine locations in 2021, completing 10 signings, and plans to open 11 new locations before the end of 2022, according to its website. The site says the company aims to have 150 franchised centers by 2026.

“Since the beginning of the pandemic, it has been challenging for working parents to be able to get their jobs done while also caring for their children during the day,” said Gigi Schweikert, CEO of Lightbridge Academy. “We are looking forward to continuing to open in new markets across the U.S. throughout 2022.”

Lightbridge Academy, which was founded in 1997 and began franchising in 2011, specializes in childcare and educational services to young children, including programs for infants, toddlers, preschoolers, and back-up care for school-aged children.

Lightbridge Academy franchisees pay a $40,000 initial franchise fee; as well as 4 percent of gross revenue for the first six months and 7 percent after that.

The site slated for the daycare center is zoned RS (Regional Shopping) but a childcare center needs a special permit.

Additionally, the site lacks adequate buffers around its front and side yards. The code requires 75-foot buffer to neighboring properties The Town Board has the authority to reduce the buffers to 50 feet, but the proposed design requires significantly less, so the applicant must also appear before Clarkstown’s Zoning Board of Appeals to obtain a variance to build up to the lot lines. No other variances are required.

The design also includes about 1,900 square feet of outdoor play space for the Lightbridge Academy and 80 parking spots.

The applicant will have to appear before the Planning Board several times, the Architectural Historic Review Board, the Zoning Board of Appeals, and the Town Board. The Planning Board would be the lead agency to address the wetlands and other site-specific issues.