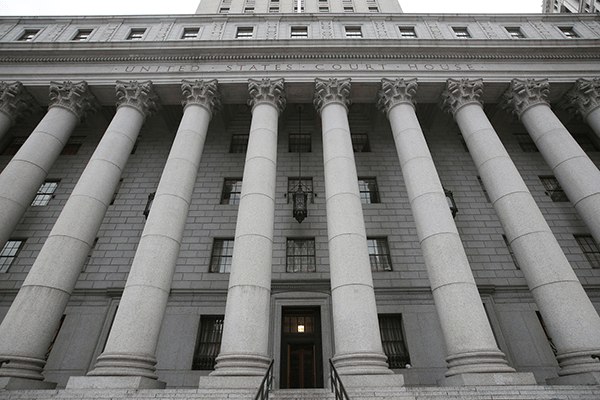 Manhattan REIT To Receive Notice Of Any Sale of Any Assets Indirectly Owned by HNA Group, Including HNA Palisades Training Center

The prospective sale of the HNA Palisades Training Center just got more complicated – if that was even possible. In addition to a recent suit filed by the former prospective buyer claiming that the Chinese company breached its contract as well as questions over whether the current prospective buyers can raise the funds they need for the purchase, there’s another twist that could complicate the deal.

A federal judge in New York has said that HNA Group, at least temporarily, cannot sell or transfer any assets (or an interest in an asset) that HNA owns including the proceeds from any sale of the Palisades Conference Center in Rockland County.

SL Green charges that HNA’s “indirect” ownership could still result in HNA Group receiving the proceeds of the sale, even if it is not the record owner of the real property.

The case arose from effort of an affiliate of SL Green, the Manhattan-based REIT, to confirm an arbitration award it secured for $185 million against HNA Group (International) Company Ltd.

SL Green sought an order attaching all property of HNA, including the proceeds of any sale of the Palisades Premier Conference Center to satisfy, at least in part, the final arbitration award against HNA. SL Green also sought an order requiring HNA to provide 14 days advance notice to it of any sale of any property owned directly or indirectly by HNA.

Complicating the matter is the acknowledgement from both sides of the litigation that HNA Group (which owes the arbitration award) does not directly own the Palisades Training Center here in Rockland County.

The order was issued by Judge John Koeltl of the Southern District of New York.

In response, in a recent court filing, HNA Group says the Palisades Training Center is owned by a Delaware LLC known as “Training Center LLC,” which is owned by HNA Group North America LLC. That LLC is owned by HNA North America LLC. The respondent says each is a separate and distinct entity, none of which is responsible for the debt, while SL Green charges that its “indirect” ownership could still result in HNA Group receiving the proceeds of the sale, even if it is not the record owner of the real property.

“Each of these entities is a separate corporate entity operating its own business, and Respondent does not own or control its subsidiaries’ assets,” lawyers for HNA Group assert.

SL Green in a filing on July 11 asserts in support of its case: “The only way to ensure that Respondent can pay a $185 million judgment is to attach any proceeds that may come into Respondent’s possession. That sale proceeds [of the Palisades Training Center] could be transferred to Respondent in the future is sufficient grounds for attachment.”

On May 9, RCBJ reported that the team tapped by the Town of Orangetown to purchase the HNA Palisades Center reached terms with its Chinese owner. The May 9 article was cited in an affidavit by the Harrison Sitomer, Chief Investment Officer of SL Green, in support of its motion for an Order To Show Cause for a prejudgment attachment of HNA’s assets.

On June 20, RCBJ reported the team of California-based developers tapped one year ago by the Town of Orangetown to buy and transform the 106-acre HNA Palisades Training Center campus at 334 Route 9W in Palisades is seeking financing to purchase the property for $33 million, but it remains unclear as to whether the prospective developers need more than 100 percent financing, or whether they have investment partners.

REVEIL LLC, a Delaware Limited Liability Company, says in a capital request it’s in contract to purchase HNA for $33 million. The developers are seeking $26.5 million, which includes $5 million in acquisition, predevelopment, and financing costs to cover the purchase price for the hotel/conference facility owned by the Chinese entity.

According to the temporary order, HNA cannot “sell, transfer, convey, gift, pledge, assign, dispose of, or otherwise encumber assets, or interests in any assets, tangible, or intangible, that HNA owns, including without limitation any interests in proceeds from any sale of the [HNA Palisades] Conference Center.” The order also requires HNA to show cause why it should not provide 14 days advance notice to 245 Park of “any sale of any property owned by HNA directly or indirectly.”

In June, a one-time buyer of the HNA Palisades Training Center that defaulted on its contract in 2019 claimed in a lawsuit filed in Rockland County Supreme Court that it is still entitled to purchase the 106-acre campus on Route 9W in Palisades.

ZVG@Palisades LLC has accused HNA of a breach of contract, saying its efforts to thwart the sale of the hotel and conference center two years ago violated terms of the contract. The plaintiff is asking the court to force HNA to convey title to ZVG in accordance with the original and amended contract. The suit also seeks unspecified damages from HNA for breaching its contract with ZVG.

HNA paid $2.2 billion to buy the 44-story building at 245 Park Avenue in 2017, before putting the tower on the market one year later. Last October, a Chinese judge approved a corporate restructuring allowing creditors of HNA to sell its assets.

SL Green invested $148 million in the building in 2018 when it came on as property manager. The REIT, which said it made the investment at HNA’s request, negotiated protections around the investment, including in the case of bankruptcy. The $185 million award in May represented SL Green’s investment in 245 Park Avenue plus other fees.

The arbitrator, former judge Priscilla Hall, said that SL Green met its burden to show a “cause event” occurred although HNA argued that a bankruptcy filing by its affiliate PWM Property Management in October should have stopped the REIT’s efforts to recover its investment. PWM owned the tower on behalf of HNA. Cause events are simply events that trigger a clause in an agreement to become active.

The court battle over 245 Park Avenue goes back several years. PWM accused SL Green of failing to find a tenant to replace the departed Major League Baseball and said the building has not had a new lease since November 2018. The arbitrator said in May that HNA didn’t prove its allegation regarding MLB.

PWM also accused SL Green of intentionally trying to put the skyscraper into financial duress, claiming the REIT would benefit because of its interest in the building and ability to foreclose if PWM failed to make its payments.