Octavio Alvarado grew up in a small lakeside Michigan town with parents who worked for other people. One of five children, he watched his mom and dad juggle day and night shifts; they were at their employers’ mercy holidays, and weekends. But several of Alvarado’s friends had entrepreneurial parents who left a deep impression on him.

Alvarado says it sowed the seeds for his own desires to steer his professional destiny.

Across the pond in southern London, Laurie Child was raised by a civil servant and a teacher. But he too watched his mum, as the Brit says, build a home day care center as a side hustle. Her grit and energy inspired Child, who had an early newspaper route and was buying sweets in bulk and reselling them to friends and family.

Child, who graduated from STAC (St. Thomas Aquinas College) in 2015, went on to work in the corporate world at Active International, a corporate barter and media company, both in the U.S. and the U.K, and later returned to STAC to earn an MBA. 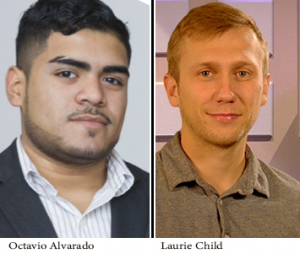 The two, both 29 years old, met up at a professional gig, where they got to know one another. This spring, they joined forces to create LO Media Group Inc., a full-service marketing and creative agency. The pair specialize in digital strategy, information architecture, website design, e-commerce, and content creation.

Though their paths were somewhat different – Octavio is a self-made web development professional who specialized in the real estate industry and never finished college, while Child has strong academic and corporate chops – the two have braided their strengths and are excited about building their company at a time in history when the world has emerged from the pandemic and demand for their services are pent up and robust.

To start, the pair have rented two joined offices in a co-working space known as Hudson One at 53 Hudson in Nyack. They have two full-time employees, and a third part-time worker. They’re already busting out of their space and are waiting for Hudson One to continue its buildout of co-working spaces so they can expand.

The pair, who had previously worked together in a corporate tower in Pearl River, said they have found freedom and community by taking a month-to-month lease in the heart of the Village of Nyack.

“The corporate park experience made you feel a bit trapped,” said Child. “It could feel dead in there. But this is a moving town. You can pop out for a mental break and take a walk down the block. It’s easy to get lunch. This makes for better productivity.”

The pair also benefit from the uniqueness of the co-working environment which puts them in direct contact with professionals from a variety of fields.

“These people, like us, have an entrepreneurial mindset,” said Alvarado. “They are running their own business. This is a good fit.”

LO Media is not Alvarado’s first entrepreneurial rodeo – years ago he founded a web development and graphic design agency, which remains a separate entity but is now farming out work to the LO Media team. LO Media’s clients include Axiom Communications, the Meadowlands Chamber of Commerce, and Procida Funding.

The team says it does a lot of “white labeling,” meaning they are hired by other agencies to work for their clients.

Meanwhile, in the frantic ramp up to get the business off the ground, they have learned that sometimes the hardest part of launching a business, and in this case a marketing company, is taking care of the company’s own marketing and brand development.

“We’ve been so busy,” said Child. “We’ve had so many word-of-mouth referrals. It’s been a good couple of months with a good outlook. We foresee hiring and expanding. We just need to find a bit more time to work on ourselves.”