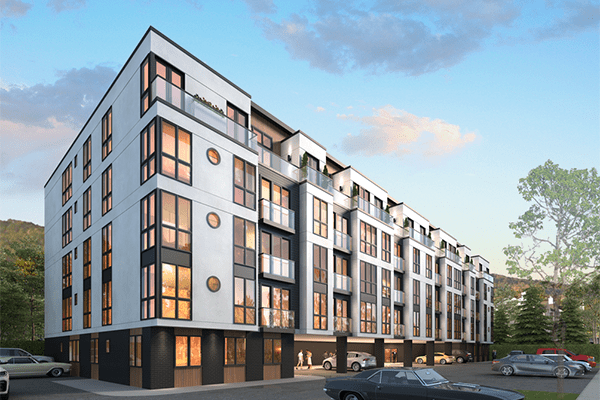 The development of a modern residential apartment building with a ground floor café near the Village of Haverstraw municipal building is expected to be a catalyst for change, just as the Village continues to move forward with a dramatic overhaul of the waterfront parcel known as the Chair Factory.

The former Graziosi building at 49 West Broad Street, long a derelict eyesore, will become a 56-unit market-rate multi-family rental building with six affordable units. The project signals a new era for the Village, which is welcoming development that will strengthen the housing market and appeal to millennials and empty nesters.

“This was a white elephant in the village for more than 25 years,” said Mayor Michael Kohut. “There were all sorts of trials and tribulations. Finally, we have a developer who saw the need for good, quality housing downtown. The developer is willing to take a risk. We believe this will be a real game changer.”

“Haverstraw isn’t the first place you think of to put market rate, modern houses, at least not in the downtown,” said Mayor Kohut.

But this game changing outcome did not happen in a vacuum. Village Square At Haverstraw LLC., whose managing member is Avrohom Schwartz of Monsey, is taking advantage of a recently adopted zoning code update that gives developers and village planners more flexibility.

The village last summer incorporated the PRI Redevelopment Incentive Floating District, which creates flexible use and design criteria including density and height incentives for both residential and commercial development, as well as for community amenities. The Overlay Floating Zones can “float” or be developed anywhere, on a minimum land plot of one-half acre or more.

“We had to learn to do things differently,” said the Mayor. “We had to bend. You can’t always do business as usual. We made significant change, for example allowing five-story buildings and an expanded allowance of units.”

The Floating Zone asks developers for something in return, including green building practices, an affordability component, public amenities, infrastructure improvements, solar power on roofs and affordable units. The ground floor café, along with a commitment for public improvements in the vicinity of the building, were both negotiated within the Floating Zone application to the village.

Many are hopeful that the village is on the cusp of a renaissance, particularly the downtown, with the Village Square At Haverstraw likely to invite more development once it’s built. Sources say a brewery is trying to open in the Stone Building across the street.

Meanwhile, village officials are drawing closer to signing a Memorandum of Understanding with a team of developers that have proposed mixed-use development on the eight acres of the former chair factory.

In February, the village tapped the Huntington Station, Long Island-based MPact Collective Inc., LLC as the lead agent in a redevelopment team. The proposed mixed-use project for the former Chair Factory site will be a much-needed and long overdue catalyst for economic growth and vitality. The proposal includes market rate and affordable housing, retail, commercial, and a hotel for the vacant nine-acre Hudson River peninsula.

“Haverstraw isn’t the first place you think of to put market rate, modern houses, at least not in the downtown,” said Kohut, referring to the disparity between the Ginsburg development on the waterfront and the dearth of new, modern housing in downtown over the past several decades. “This developer saw the unpolished apple two years ago, and he’s polished that apple. He’s ahead of the curve.”

Village Square At Haverstraw purchased the property in October of 2020 for $1.25 million and has received a $9.6 million dollar construction loan from Northeast Community Bank in December of 2021.

The developer is hoping to secure a $1.5 million grant from the village’s $10 million Downtown Revitalization Grant, which it won last November. Officials say they do not believe the developer’s plans are contingent on winning that award.

In 2005, the village attempted to take the property by eminent domain days after it was sold to 49 WB, LLC. The village had planned to flip it to another buyer for a community health outreach center (who was already a tenant in the building and was unable to purchase it outright) and for the possible construction and sale of 16 affordable condominium units.

Ultimately a court found the village’s stated reasons for acquiring the property were “illusory” and “pretextual,” and that the real reason the village was condemning the property was to assist the Ginsburg Development Company, a private developer, meet its obligations to provide affordable housing units as part of its agreement with the Village to develop its vast waterfront holdings.

The court rejected the village’s arguments and set aside the condemnation. After that, the building sat idle until the owner lost it to unpaid taxes in 2015. The county sold the property off to the Goldstein Group in 2018 for $680,000 who then sold it to its current owner in 2020.