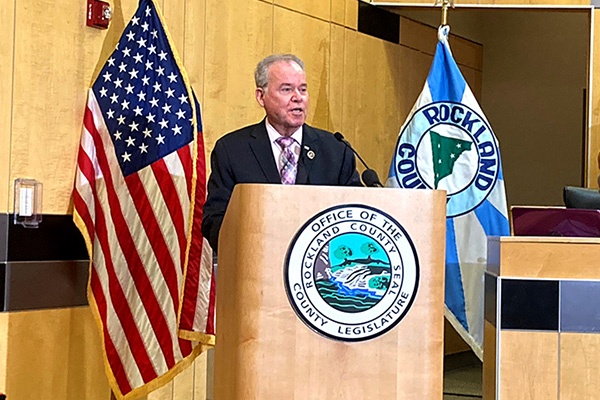 Development, Film Industry, Restaurant Businesses On The Rebound In Rockland

STATE OF THE COUNTY

It has been a tough recovery from the pandemic and its economic fallout, but Rockland County remains strong and is regaining its sea legs, according to County Executive Ed Day’s State of the County address Tuesday at the County Legislative Building in New City.

“There’s no question our businesses took a big hit from COVID, and I want to applaud every single business owner who fought throughout the pandemic to keep their doors open,” said Day. “The economic health of our community is directly linked to companies like yours staying committed to the people of Rockland. Thank you for sticking with us.”

Rockland’s unemployment rate is down to 3.3 percent. “I’m happy to say, it is among the lowest in the Hudson Valley,” said Day.

The county in 2021 received $63 million in American Rescue Plan Act funds and created a department tasked with maximizing every single federal dollar spent for the people of Rockland, Day said.

The Reviving Rockland Restaurants Grant Program is providing financial relief to restaurants that encountered unexpected costs from COVID, like renovations to accommodate outdoor dining. Restaurants are eligible for reimbursement grants up to $25,000 to cover their costs.

The Department of Community Development Rockland County in 2021 received $3.5 million in Federal Cares Act funding from HUD for the Community Development Block Program. The program awarded up to $45,000 in relief to small businesses and non-profits to help them retain workers and stay open.

“This pandemic is now going into its third year, and I have no doubt this department is doing everything humanly possible to keep the numbers down and get Rockland back to normal,” said Day. Nearly 80 percent of residents over the age of five and up have received at least one dose and the county is down to roughly 500 active COVID cases.

Rockland’s unemployment rate is down to 3.3 percent. “I’m happy to say, it is among the lowest in the Hudson Valley,” said Day. A marked contrast to the 13.3 percent unemployment at the height of the pandemic two years ago.

Day remarked that the county has increased the total value of its taxable real estate by $7.4 billion in five years – a 21 percent increase. “This growth ultimately brings good jobs to Rockland, stabilizes our tax base, and shields families from the double-digit tax increases of the past,” he said.

Over the past month, Rockland County has responded to Department of Homeland Security warnings to U.S. organizations at all levels to be wary of cyber-attacks from the Russian government, and its supporters, in retaliation to sanctions imposed on Russia over its invasion of Ukraine.

“This county does not take these types of threats lightly,” said Day. “Our Information and Technology Services Department has been regularly upgrading our IT Infrastructure. I’m confident this department is doing everything possible to shield us from any breach or cyber-attack.”

The ITS department also installed a new county-wide phone system and upgraded the entire network infrastructure to increase networking speed. The Public Defender’s Office is streamlining its filing system to have each of Rockland’s 22 justice courts paperless by the end of the year.

Day said the Department of Budget and Finance refinanced various capital serial bonds saving taxpayers nearly half a million dollars per year over the life of these bonds.

2022 Budget Has No Property Tax Increase

“Through their efforts, the work of every one of our departments, and the County Legislature, we crafted a 2022 budget with no property tax increase,” he said.

Rockland created a County Office of Buildings and Codes in response to an order by the New York State Department of State to assume the functions and responsibilities of the Spring Valley Building Department.

“Despite it being a near-insurmountable mission, we did it, marking a major step forward in protecting the people of Spring Valley,” said Day.

The Department of Consumer Protection is focusing on cracking down on unlicensed contractors. In 2021, the department investigated 406 complaints, resulting in 141 prosecutions and 507 violations, which Day says have offset the operational expenses of the department.

The Rockland County Industrial Development Agency received 17 applications for new projects last year — a record high, Day said. “The investment from all these projects is estimated to be nearly $1 billion and expected to generate 400 good paying jobs, plus temporary construction jobs.

Day noted the county’s Department of Planning, which undertakes reviews of development applications, in 2021 completed 25 percent more reviews than the five-year average.

If not for tourism-generated sales and local taxes, the average household in Rockland would have to pay an additional $422 in yearly taxes to maintain our current level of services.

The county awarded $205,000 to 22 organizations to advertise upcoming events and help attract more visitors from outside Rockland. These county dollars come with a set of performance expectations, and we’re confident the organizations receiving these funds will meet those standards and bring in visitors who keep coming back.

“Our improved financial situation has given us the ability to take on needed infrastructure improvements, including the completion of our new highway garage this July,” said Day. Built on 24 acres, the facility will consist of seven buildings totaling 113,000 square feet and located centrally to shorten response times countywide. The facility includes a new maintenance repair building and indoor storage for the county fleet.

It also has a large-vehicle wash facility which will increase the life expectancy of our vehicles by 20 percent, saving about $190,000 a year, said Day, adding “the best part – towns and villages will be able to access it as well increasing the lifespans of their highway fleets.”

The garage will have the capacity to store 10,000 tons of salt, doubling current capacity, and will be available for towns and villages to purchase as needed.

“Public transportation is another vital component that every community and economy thrive from which is why we are constantly working on enhancing our transit system,” said Day.

Five new modified Dodge Grand Caravans were added to the TRIPS fleet last year, which transports residents with disabilities. The transportation department is purchasing nearly two dozen new TRIPS buses this year and 20 clean-diesel TOR buses which will be in service by the end of this summer.

The department is identifying locations for new bus shelters and launching a new Bus Shelter Solar Lighting campaign. Under that campaign, solar lights will be installed at bus stop shelters throughout the county, enhancing safety and transportation at night for riders.

In 2021, the Division of Environmental Resources established an Agricultural & Farming Education center in the Town of Ramapo. The 24- acre farm, acquired by the county in 2002 as part of the Open Space Acquisition Program, provides schools with tours and educational programs in agriculture, livestock, and beekeeping.

Through the Open Space Acquisition Program, Rockland County received $10 million in funding this budget year to acquire new properties.  After receiving 17 nominations for consideration, four properties are under consideration to be purchased.