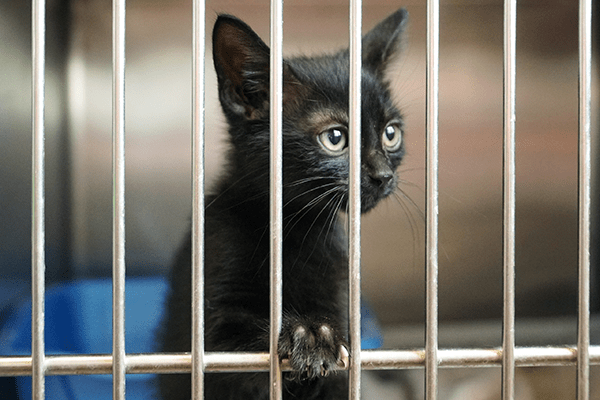 Under the direction of Hi-Tor Animal Care Shelter’s board president Debbie DiBernardo for the past seven years, the Pomona facility has processed thousands of abandoned kittens who were treated medically, sheltered, and mostly adopted to county residents and beyond. Over time, innumerable entries were made on reports logging the intake of animals without becoming the subject of a legal tangle.

But one day in June 2020, a dispute over the paper processing of a clowder of seventeen felines became the focus of a criminal indictment against DiBernardo by the Rockland County District Attorney’s Office following a three-month investigation of the shelter’s operations. The facts of the day can and will be disputed if, and when this case goes to trial. But the immediate and ongoing impact of one felony charge and seventeen misdemeanors (one for each kitten processed) has enveloped the shelter in a dark cloud, hurting its ability to raise funds, recruit volunteers, hold onto its personnel, and most importantly, adopt out animals.

“People don’t call us back,” said DiBernardo. “They’re not interested in doing partnerships. They’re reluctant to work with us. They don’t want to be dragged through the mud.”

In January, DiBernardo, 51, was indicted by a Rockland County Grand Jury for offering a false instrument for filing in the 1st Degree and 17 counts of falsifying business records in the 2nd Degree (17 Counts). The prosecution of the case, which has dragged on for months and could take more than a year to resolve, is unfolding amid the county’s plan to build an $8.3 million shelter, efforts by Rockland Green (the former Rockland County Solid Waste Authority) to take over the shelter’s operations, and the county’s upcoming need to renegotiate its contracts with the towns, which expire this year. On Tuesday, Town of Haverstraw Supervisor Howard Phillips, who is also the chairman of Rockland Green, appeared before a joint county legislative committee (Planning & Public Works and Budget & Finance) to seek approval to change its charter to take over Hi Tor. Rockland Green needs approval to change its charter before it can oversee and manage the shelter. Committee members unanimously approved the request, which now moves to the state before returning to the full legislature for a vote.

Many familiar with the criminal legal case say they do not understand the gravity of the charges, as the case revolves around an alleged record-keeping dispute that did not enrich DiBernardo, nor did it impact the fortunes of the shelter. It boils down to a paper error that originated with the intake. Former shelter manager Victoria Kartis claims DiBernardo told her to falsify the intake records. DiBernardo denies the accusation. The indictment alleges DiBernardo sent a false voucher to the county.

The county’s financial obligation with Hi-Tor does not change based on the number of animals it takes in, according to the county. The county’s contract with the shelter is a set fee of $71,635 quarterly derived from payments by the towns to the county, and an annual payment of $45,000 directly from county coffers, according to Hi-Tor.

These facts have many, including legal minds, scratching their heads. Many who have spoken to RCBJ ponder how the alleged crime rises to an act of “material” criminality given the mitigating circumstances. In several off-the-record conversations, they point out the defendant did not personally benefit from the alleged paperwork error; that DiBernardo has no past record of criminal behavior. In fact, she has volunteered for seven years to run a dysfunctional shelter that struggles to perform even marginally due to its outdated building, a constant spate of internal fighting, and the challenge of fundraising.

“In New York law, there’s a motion to dismiss an indictment in ‘furtherance of justice’,” said an attorney who preferred to remain anonymous. “Such a motion looks at the seriousness and circumstances of the offence. The history and character of the defendant. The quality or lack of quality of the evidence. The case seems to hinge on the testimony of a single witness. What I wonder is whether this case can really be justified when you consider the greater good? Is it really in the interests of justice to prosecute this case where there is no victim and no financial gain?”

A public official who also chose to remain anonymous also wondered about the case.

“You have a very public indictment,” the public official said. “What do you expect is going to happen to Hi-Tor?”

Asked to comment on the impact the case is having on Rockland’s only full-service shelter, the DA’s office said in an email “the Rockland County District Attorney’s office doesn’t comment on active cases or investigations.”

What lies at the heart of the case is whether DiBernardo instructed Kartis to falsely record the jurisdiction the cats originated from, or whether Kartis did that on her own volition. It has been firmly established – and Rockland County Attorney Thomas E. Humbach has confirmed in a letter to Hi-Tor – that nothing in the county’s contract with Hi-Tor prohibits taking in animals from outside the county so long as it is not turning away cats from the county. No one is disputing the kittens taken in on that June day came from New Jersey even though the intake sheets and subsequently a voucher submitted to the county say the cats came from Spring Valley. Interestingly, Spring Valley does not pay the county for Hi Tor’s services.

On the day the cats were brought in, DiBernardo, who was not at the shelter, argued with Kartis by phone over the intake of the New Jersey cats, sources say. The incident highlighted ongoing differences of opinion between DiBernardo, who was amenable to sheltering more kittens, and Kartis, who wanted to keep the numbers of animals in check. At the time, Hi-Tor was sheltering historically low numbers of animals, especially cats, and had no kittens.

What’s at issue for the court is whether the information submitted on the voucher, even if misrepresented or inaccurate, amounts to a crime, and whether it can be proved that DiBernardo instructed Kartis to lie. The seventeen misdemeanor charges pertain to the internal intake documents for the kittens.

Since the indictment, shelter insiders say employees have fled, the volunteer team has whittled down to a fraction of what it once was, and fundraising is a huge struggle.

Hi-Tor has been under a cloud since the DA’s Office executed a search warrant at Hi-Tor. Insiders say the search was initiated after Jeff Gillies, Town of Clarkstown’s Director of Economic Development, approached the DA’s Office to share concerns presented to the town supervisor from shelter volunteers. Among other things, volunteers told Town Supervisor George Hoehmann there had been a comingling of funds between Hi-Tor and an independent nonprofit rabbit rescue run by a former board member and raised other accusations of financial improprieties. No charges have stemmed from allegations concerning the handling and care of the rabbits, or any other issues apart from the documents concerning the intake and the voucher for the seventeen cats.

Board members confirm the shelter has lost more than 80 percent of its 100 plus volunteers. A manager and assistant manager left, though both have been replaced. The board recently appointed a new board member, but board members remain wary of public visibility and their names have been removed from the shelter website. The shelter has had paltry responses to recent fundraising efforts. A recent pitch sent to 21,000 stakeholders returned only 1 percent return rate – the lowest response ever, said a board member.

In the wake of the indictment, an effort to partner with a corporate entity in the county to hold a golf outing to raise funds was scuttled.

“Shortly before this happened, a lady from New York City donated $10,000 to the shelter,” said DiBernardo. “She had planned to give us another check. But when she heard about the case, she changed her mind. We tried to speak to her, but she wasn’t interested anymore.”

To date, Hi-Tor has stood by its president and has been paying to defend DiBernardo, putting more financial pressure on the nonprofit.

Hi-Tor has long suffered under the strain of operating out of a dilapidated shelter, and for years, board presidents have come and gone, and board members have wrangled over how to best run the nonprofit. However, after DiBernardo, and former vice president Richard Yanatelli stepped in seven years ago, Hi-Tor was on better financial footing due to a new arrangement between Rockland County and the five towns to support the shelter. When DiBernardo took over, the shelter was $60,000 in debt. In 2016, the shelter’s budget was $183,038. In 2018, the five-year agreement kicked in, with Hi-Tor receiving $406,796. That level of funding remained stable in 2019 but dropped to $338,742 when the Town of Orangetown severed its contract with the county and negotiated a new arrangement with Hudson Valley Humane Society. In addition, the remaining towns were given a 10 percent discount from the county. The 10 percent drop of revenue was made up by the county.

DiBernardo says the organization is more solvent than ever, with a projected surplus of $156,596 projected for 2021. But Hi-Tor’s future hangs in the balance as the investigation snakes on, Rockland Green prepares to take over, and the nonprofit’s reputation continues to suffer from a black eye.