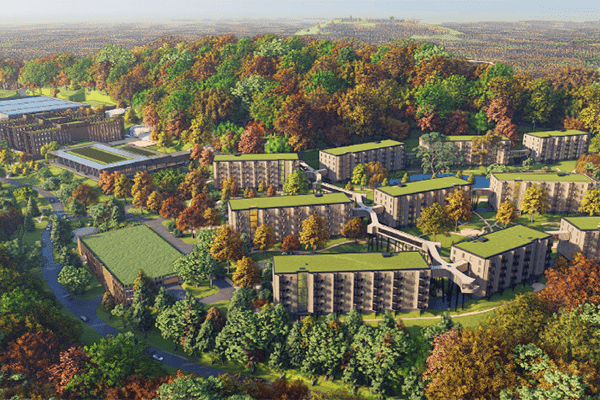 Over the past eight months, the Watchtower Bible and Tract Society has reviewed public and other comments on its proposed development for 155 Sterling Mine Road in Ramapo and has revised its plans.

On Monday, the applicant was prepared to present its FEIS (Final Environmental Impact Statement) and hoped the Ramapo Town Board would accept its submission as “final,” to move on to review by the Rockland County Planning Department.

Instead, the board deferred making decisions, seemingly because they did not have enough time to review some newly submitted documents by the activist group ROSA.

“We’re asking the board to take action on the ‘FEIS’,” said Attorney Ira Emanuel. “If you don’t like it, change it. Do it. We want to move the process forward. We need finality.”

“We’ve put in 600-man hours for this review,” said Keith Cady, the project’s architect. “We hope we’ve addressed all the issues. We want to move forward to respond to questions.”

The town will hold another public hearing Wednesday, March 23, to consider acceptance of the FEIS.

The 1.7 million square-foot project, known as the Watchtower Bible and Tract Society, is slated for 155 Sterling Mine Road in largely Ramapo and partly in Tuxedo in Orange County. Of the 249 acres, 242 are located in Ramapo; the balance is in Tuxedo.

The proposal would rezone the portion of the project site within the Town of Ramapo to a new MU-3 Mixed-Use Zoning District to permit the applicant to develop an integrated residential and commercial campus.

The Ramapo portion of the project site was previously subdivided into 293 lots for the “Sterling Mine Road Active Adult Community,” which was commonly known as the “Lorterdan Project.” No physical improvements were made to the property following the subdivision approval.

In response to concerns over the scope of the project, the applicant has proposed building heights up to 75 feet in exchange for designating half of the acreage as preserved open space. Currently, the proposed MU3 district allows for building heights up to 45 feet. The applicant said that because of the topography, 75 feet buildings would appear smaller than the 45-foot buildings.

The applicant is also seeking inclusion of a “Conceptual Development Special Permit (CDSP)” which would ensure that the concept isn’t fundamentally altered from its original plan when the final site approval is completed. Essentially such a permit plan would limit the planning board’s powers.

Also, Watchtower is hoping to sweeten its application by asking the town to only allow MU-3 uses in parcels that exceed 200 acres. This would preclude a subdivision of its site, which the applicant presumably views as an incentive to the town.

Following the May 26 public hearing, the applicant acquired a .15-acre easement in the Town of Tuxedo to improve access to the project site. At the request of the Tuxedo Planning Board and the Orange County Department of Public Works, and as part of a separate project, Watchtower will abandon the existing dirt driveway that provides direct access to the site and construct a four-way intersection with Eagle Valley Road, Sterlington Road, and Sterling Mine Road. Access to the site would be gained via an easement from Sterlington Road, which also provides access to the existing Sisters Servants of Mary Immaculate and St. Joseph’s Adult Care Home.

The town will consider necessary changes to the Comprehensive Plan and the Watchtower’s proposed zoning amendments at an April 27 public hearing.