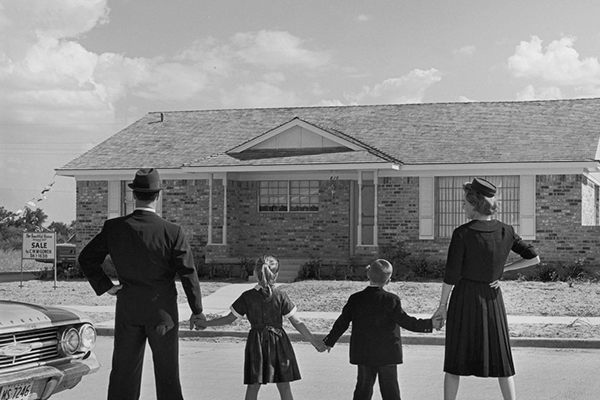 As Ramapo peers down the road, the delicate task of updating the town’s Comprehensive Plan for the first time in nearly 20 years boils down to a balancing act of providing housing for a growing community while preserving significant environmental assets that make the municipality a desirable place to live.

“My children are grown and married and looking for places to rent in Ramapo but it’s nearly impossible,” said Ramapo resident Jordan Most during a special meeting on Tuesday for public comment on the proposed plan. “The children we’ve raised here want to come back to the community, but they can’t. And at the same time, my wife and I want to downsize. Where are we going to live – whether we buy or rent? People in our age bracket can’t maintain large homes. Where are we going to live?”

Ramapo is considering significant development changes to its Northeast Corridor that could pave the way for the kind of housing that caters to millennials and empty nesters. The town, along with the rest of Rockland County, is grappling with a housing shortage. In its plan, the town’s planner writes “there is a need for an increased housing supply, as well as ways to diversify the housing stock.” The plan notes that the prevalence of Ramapo’s large-sized households and increases in the numbers of these households, and a population that will become younger on average as time progresses, creating a need for rentals and more affordable homes to purchase.

There is generally town-wide consensus that more housing is needed, however residents also have expressed passionate pleas to maintain open spaces and protect wetlands and trees.

“We already have too much density for the resources we have,” said New Hempstead resident Alan Friedberg. “The Striker property is the headwaters of the Hackensack River. We don’t want to create a water scarcity. Or cut down too many trees, which provide oxygen. We have here a treasured natural area that we have to protect.”

To strike a compromise, town planners hope to focus denser housing and commercial development in the northeast corridor, which largely borders the Palisades Interstate Parkway west of Clarkstown and north of New Hempstead Road and Route 202. 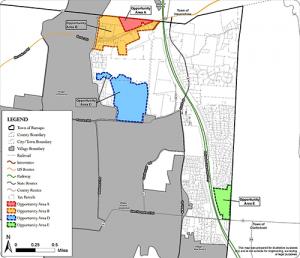 In a presentation of the FGEIS (final generic environmental impact statement), the town said it has removed plans to allow development in “Opportunity Area C,” which included Route 45 from South Mountain Road to Old Route 202. It also excised a new neighborhood shopping district to the west of South Mountain Road situated along the eastern flank of the Palisades Parkway.

Under consideration are changes in future land uses and densities focused within key areas called Opportunity Areas. Opportunity Area A encompasses the north side of Route 202 adjacent to Town of Haverstraw. Area B is along Route 202 from the Palisades Parkway to South Camp Hill Road. Area D is the former Minisceongo Golf Course. And area E is along New Hempstead Road at the Gracepoint Gospel Church site.

The town is proposing Flexible Overlay Planned Unit Developments (FOPUDs), which are floating overlays that can be on any parcel in the opportunity areas of at least 20 acres. An approved site would allow for a combination of residential, commercial, office, retail, or other land uses, provided the plan submitted for the FOPUD complied with the Town’s Comprehensive Plan. Land wouldn’t be zoned for any particular use, but a mixed-use plan within the FOPUD could accommodate multiple uses. The plan calls for a 20-acre minimum though the land can be divided by a street or highway.

The intent of the FOPUD is to create functional neighborhoods instead of purely residential developments or purely commercial or retail centers.

Town planner Jaclyn Hakes on Tuesday said the plan “caps density in the FOPUDs and sets reasonable planning parameters.” The estimated number of housing units would allow between 1,100 and 1,200 units.

However, some residents raised concern that the proposal does not take into account the bigger picture, which includes proposed development in New Hempstead, which recently adopted a zoning change that could add hundreds of units including 150 units on the 34-acre former Matterhorn Nursery. The village plan also envisions businesses and a hotel on property near the baseball stadium off Route 45.

The other major change under consideration is the creation of a new CC Commercial Corridor District within Opportunity Areas A and B along the Route 202 corridor, where at least 70 percent of the district would have commercial and/or office uses but could include housing. Uses permitted by right in the new CC zone would include garden apartments, townhouses, and multiple family dwellings, retail stores and service establishments and hotels. Gas stations, theaters and cinemas would be allowed by special permit from the Planning Board. Schools and houses or worship would require a special permit from the Town Board. The minimum lot area in the new zone is 25,000sf and the FAR is 65 percent of the lot size.

A CC development must consist of at least 70 percent commercial and/or office uses and may contain up to 30 percent residential uses. The maximum density for residential use would be six residential units per acre (after designating at least 70 percent of the total development for commercial use). The intent is to create residential units above the first floor of mixed-use buildings, with separate entrances for each use. Buildings in the CC zone cannot exceed three stories, sidewalks are required, and all buildings are subject to both site plan and architectural review and approval.

The proposed CC district runs on both sides of Route 202, all the way to the Village of Pomona border to the west and along the border with the Town of Haverstraw to the north.

Upon the urging of several speakers on Tuesday to keep the public hearing open until April 1, the board compromised by keeping comment period open through March 28th. There will be another hearing at town hall March 23.

“This has been the culmination of a two-and-a-half year effort and we are in the homestretch,” said town supervisor Michael Specht on WRCR on Monday. “We have listened to comments and have eliminated some of the zoning changes to keep the residential character intact.”