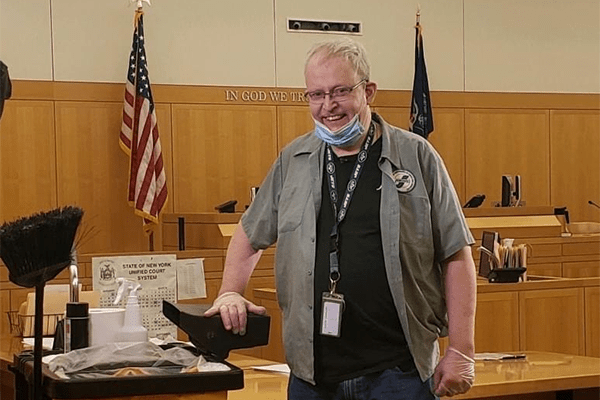 Most people think of Jawonio as an agency that helps people with challenges. And it does – some 3,500 individuals with physical and mental disabilities annually over the span of two decades. But what Jawonio’s CEO Randi Rio-Castro wants county residents and particularly employers to understand is that the agency is the seventh largest employer in the county, and the nonprofit runs a cleaning company that gives more than 150 people with disabilities the opportunity to earn a living wage.

Boiled down more simply, the nonprofit, like many statewide providing disability services, is a key component of the local economy.

Jawonio on March 4 held a press conference with New York State Industries for the Disabled (NYSID) to present a report from the Rockefeller Institute of Government that revealed the Mid-Hudson nonprofit disability sector supports more than 33,000 full-time jobs and generates more than $2 billion in economic impact.

NYSID, along with the New York Alliance for Inclusion & Innovation commissioned the novel report to show economic impact in numbers.

“We had been working with the previous administration on the needs for this sector, but it was an extremely difficult conversation,” said Maureen O’Brien, president/CEO of NYSID. “In order to help this administration understand that government funding is needed, we needed to put the numbers behind what we’re seeing. We needed to show Albany why the investment pays for itself.”

The industry supported 194,977 full-time jobs with service providers, their suppliers, and in the regional economy. And it contributed $2.2 billion in federal and state tax revenue.

In the mid-Hudson region, people with disabilities number 250,000 or 10 percent of the population. Of those, only 38 percent are employed, while at least 22 percent live in poverty. There are 79 agencies serving this population.

NYSID in 2020 created 5,273 living-wage jobs, a 10 percent reduction over 2019 due to the pandemic. Job categories include janitorial services, data imaging, data entry, mail fulfillment for retail.

Nationally, the unemployment rate among people with disabilities is nearly 39 percent. New York State ranked 43 out of 50 states in disability employment.

“A 67 percent unemployment rate is awful,” said O’Brien. “We want to change that, and we want to support vocational training programs that disability service providers offer to move forward. We need to work with local and state government agencies, as well as private sector companies to diversify supply chains.”

In 2019, the average full-time worker with a disability in New York state earned $46,894 annually, compared with $54,944 for employees without disabilities, ranking New York 13 out of 50 nationwide in average earnings. However, the earnings gap is the 15th largest in the nation, with individuals with disabilities earning 85 cents for every dollar.

Given the recent employee shortage, advocates for people with disabilities are hoping employers in the Hudson Valley will widen their searches for employees, will open their minds to a sector of the population that is often overlooked or hidden.

“The barrier to employment is due to a lack of understanding,” said O’Brien. “People with disabilities are generally happy to work and they stay longer on the job once they are trained. They are no different than any hire, but they tend to be more grateful, to have a better attitude. And they’re happy to show up every day.”

Jawonio’s Cleaning Company is responsible for regularly cleaning 2.3 million square feet at 35 sites including the White Plains Courthouse, the Robert L. Yeager Health Center, and the New York School for the Deaf.

The social enterprise employs about 120 individuals with disabilities earning hourly wages ranging from $16.65 to just over $23.00 (including Supplemental Wages) for NYSID contract sites. To prepare employees for work, Jawonio runs the Green Clean Training program, which combines classroom and hands-on learning.

As employees gain experience and demonstrate leadership skills, they can advance within the Jawonio Cleaning Company or be placed with outside employers.

In response to COVID-19, there has been increased demand for janitorial services. Workers have shifted schedules from evening to daytime hours, met demand for continuous cleaning services, and adapted to CDC guidelines.

“What the Rockefeller report shows is that employed people are tax payers, they are giving back, they require less in government assistance,” said Rio-Castro.

The Jawonio CEO said more local businesses need to become aware of the value of hiring.

“We work with about 25 companies in Rockland, but we are hoping this will grow,” she added.