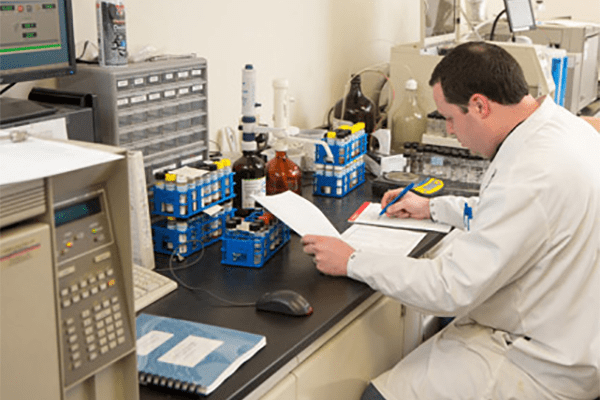 Rockland residents are filled with concern over unsafe levels of chemicals known as PFAS in the drinking water. PFAS are chemicals used in everything from plastics to firefighting foam and linked to health issues like high blood pressure and cancer. While the federal limit for these chemicals is 70 parts per trillion, last summer the New York  tightened the limit to 10 parts per trillion.

For more than three decades, environmental professionals have turned to York Analytical Laboratories, Inc. of Nyack for water testing in the tri-state region. But now, York Analytical has bought Aqua Environmental Lab, Inc. in Newton, CT for an undisclosed amount to absorb the demand for water quality testing to homeowners.

“The water contamination issue has snowballed,” said Michael J. Beckerich, president and CEO of York Analytical. “Forever chemicals, known as PFAS, are a crisis in Rockland and Westchester counties. We have never before dealt with so much demand from homeowners who want their water tested.”

Additionally, Beckerich says water testing is becoming a concern for the residential realtor community. Certified water analysis is required for sale or transfer of residential or business properties, while drinking water permits are mandated for businesses serving the public.

“We are providing education to realtors about PFAS,” said York’s CEO. “As people move from the city, they continue to hear about issues with the water. Realtors need to be up on resources for getting drinking water tested.”

In August 2020, New York State adopted new drinking water standards that allow a maximum of 10 parts per trillion (ppt) for only two out of this large class of over 9,000 PFAS chemicals.

The compounds seep into water from factories, landfills, and other sources. And because they don’t easily break down in the environment, they’re often called “forever chemicals.” Until now, residential owners and property owners that wanted water quality testing for “forever chemicals” couldn’t get it easily because PFAS were an unregulated contaminant.

While most Rocklanders get water from a private or public utility, there also are about 8,000 private wells in the county. Private well owners have not been notified of the contamination. The regulation does not apply to private wells. The county has set up a Private Well Lookup Tool on its web site where private well owners can learn whether their wells are within ¼ of a mile of a point where the two regulated PFAS have been detected.

“Educating agents about the issues with PFAS and providing testing is really important,” said Joe Rand, a realtor with Howard Hanna Rand Realty. “We are all still studying it, but I wouldn’t be surprised if this kind of testing ultimately became as common in real estate sales as home inspections.”

On August 26, 2020, New York State (NYS) adopted new drinking water standards that set Maximum Contaminant Levels (MCL) of 10 parts per trillion (10 ppt) for perfluorooctanoic acid (PFOA) and perfluorooctanesulfonic acid (PFOS). PFOA and PFOS are part of a large family of manmade chemicals known as per- and polyfluoralkyl substances (PFAS) that have been widely used in various consumer, commercial, and industrial products since the 1950’s.

But PFAS chemicals are also found in drinking water, which is contaminated by a variety of sources including firefighting foam and industrial discharges.

Beckerich’s father founded York Analytical in Stratford Connecticut in 1990 with ten employees, in the wake of the Clean Air Act. Over the decades, the company grew from one location to three labs and two service centers, largely focused on professional engineering clients who built malls and bridges. In 2008, Beckerich, then a communications specialist at Johnson & Johnson, left the company and joined his father, who’s now retired, at York.

For years, his focus was building a client list that included large municipal projects.

As regulations on contamination became more governed, the company grew to 100 employees.

“In the last two years, testing for PFAS and “forever chemicals” has more than doubled and grown to over 10 percent of our overall business,” says Beckerich.  “The tests are very complex – when we’re analyzing PFAS the results are measured in parts per trillion, the equivalent of a few droplets in an Olympic swimming pool.  In the past few years, York has invested significant resources to obtain NELAC regulatory licensing for PFAS in drinking water, wastewater, groundwater and soil.”

The acquisition of Aqua Environmental gives Beckerich the flexibility to pivot to the residential sector. The Connecticut lab has 10 employees.

In ramping up to service homeowner, York’s has created “What’s in Your H2O.com”, an online testing site with a choice of five drinking water testing options, including the new Forever Chemicals Water Test.  Both private well water and municipal drinking water can be tested.  Once testing is complete, York provides clients with a report with an interpretive guide of the results. Testing can cost between $400 and $800.

Additionally, there are five What’s In Your H2O Service Hubs in New York and Connecticut, including a Nyack location at 50 Gedney Street, where residents can pick up and drop off their water sample testing kits. York Analytical is partnering with businesses such as real estate agencies and water treatment companies to expand the number of pick-up and drop-off locations throughout the region.

Installing water filtration systems can cost between $2,500 up to $10,000. York Analytical has a list of contractors.