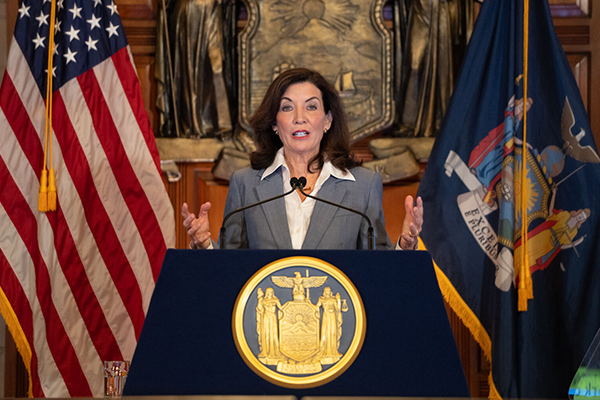 Gov. Promises To Position New York As The Most “Business Friendly and Worker Friendly State In Nation”

Gov. Kathy Hochul last Wednesday spelled out a plan for navigating New York through the coronavirus pandemic, while highlighting ways to support small businesses and attract new investment. She addressed a housing crisis, the need to bolster the healthcare industry, tax incentives for startups and green energy initiatives.

The first female governor in her first State of the State address promised to position New York as the most “business friendly and worker-friendly state in the nation.”

The governor indicated a priority to help small businesses, which account for 98 percent of businesses statewide, according to Hochul. Venture-backed startups would be allotted financial incentives to stay or relocate to New York as part of what the governor called a “nearly billion-dollar” initiative for small businesses. New York has become a hotbed for tech startups, but the fledgling companies often flee the state.

The governor also proposed $100 million in tax relief for some 200,000 small businesses and a tax credit for businesses that incurred COVID-related expenses such as outdoor dining. The governor also vowed to give the hospitality industry a shot in the arm by allowing the sale of to-go drinks for bars and restaurants, codifying an industry-saving program that was introduced during COVID but lapsed in June. The New York State Liquor Store Association opposed the change, claiming it would impact business at liquor stores.

The governor vowed to create a new department, the Office of Workforce and Economic Development, which in collaboration with state universities and local companies, would identify urgent and long-term employment needs and help train workers in those fields.

The governor also called for spending $10 billion to prop up the state’s health care work force, which has been pummeled by COVID. The multi-year proposal would be a boon to unions that represent healthcare workers and would amount to close to 5 percent of the current state budget. Some $2 billion would be earmarked for retention bonuses of up to $3,000 apiece to health care workers. Another $2 billion would be slated for capital investment in health care infrastructure. Additional funds would be spent on loan forgiveness for professionals working in underserved regions.

She also wants to offer free tuition to students who are gearing up to work in high-demand health occupations and to provide stipends to make up for lost income while they’re studying. Doctors could receive loan forgiveness up to $120,000 if they work in underserved areas for three years.

Hochul also stressed the need to invest in training and expanding New York’s workforce, and to accelerate a $1.2 billion tax cut for middle class earners that was introduced by the former governor in 2018 but was not due to go into effect until 2025. The tax cut, which would permanently lower the personal income tax rates for some, would take effect in 2023.

The governor wants to spend $25 billion to build or preserve 100,000 affordable homes, including 10,000 that would include services for people at risk of homelessness.

The governor also waded into a controversial subject, saying she wants to permit bigger apartment buildings and more density around transit lines.

Her plan includes legalizing many basement and garage homes, replacing a popular tax incentive that encourages developers to build affordable housing with one that targets lower-income residents, making it easier to convert hotels and offices to housing and preventing landlords from rejecting tenants because of past rap sheets.

The governor introduced a five-year plan to build 100,000 units of affordable housing and, with the state’s moratorium expiring this month, she proposed a program that would provide free legal assistance to poor renters facing eviction. She was silent on demands to enshrine in state law a requirement limiting the ability of landlords to evict tenants and raise rents.

The housing plan was lauded by the state’s real estate lobby but criticized by a group of democratic socialist legislators for not doing enough to address the affordability crisis.

The governor also vowed to move forward with the state’s climate goals, promulgated into law in 2019, including generating 70 percent of the state’s electricity from renewable sources and reducing 40 percent of its greenhouse gases by 2030.

The governor proposed a $500 million investment in the state’s offshore wind industry, with a plan to develop and expand its manufacturing and supply chain infrastructure. The governor vowed to phase out some of the most egregious polluters, promote clean energy storage and create more green jobs.

A Closer Look At Hochul’s Plans

Funding for Small Businesses of the Future: This initiative will support venture capital and venture debt awards to fast-growing, venture-backed startups that either locate to, or remain and grow in, New York State. This funding will assist emerging small businesses in the innovation sector, including minority- and women-owned companies often overlooked by private-sector venture investments. Through this program, New York State will continue to be the center of innovation and small business growth.

Seed Funding for Small Businesses: This initiative will provide flexible grants to early-stage small businesses to help those that recently opened get off the ground, despite the COVID pandemic. Priority will be given to socially and economically disadvantaged small business owners.

The Excelsior Contracting Opportunities Initiative – This initiative will provide state-backed funding and technical assistance to position small businesses — particularly those which are socially and economically disadvantaged — to secure federally funded contracts related to the $1.2 trillion federal Infrastructure Investment and Jobs Act. This initiative will also include the establishment of an interagency Excelsior Contracting Opportunities Council — including Empire State Development, the State Department of Transportation, the Thruway Authority, the Metropolitan Transportation Authority, and the Port Authority of New York and New Jersey — to identify strategies to encourage greater minority- and women-owned small business participation in forthcoming federally funded infrastructure projects across the State.