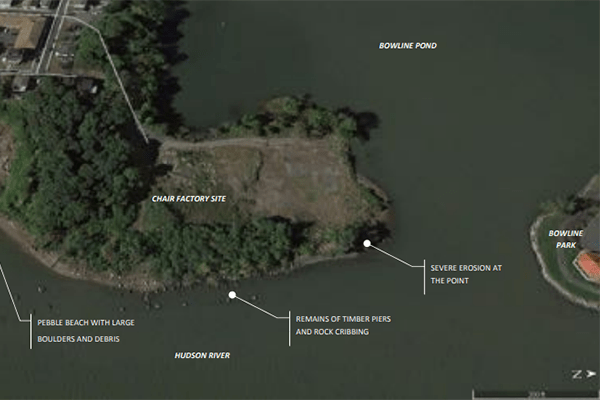 Brick Museum Expansion To Waterfront Being Contemplated By One Prospective Developer

Village of Haverstraw board members are meeting with four prospective development teams that are vying to transform the fallow waterfront into a mixed-use plan designed to breathe new life into the village.

The village board is meeting this week in back-to-back executive sessions to vet the teams, which have all proposed some combination of residential, commercial, and hospitality uses for the nine-acre village-owned site.

“We are meeting with all four proposers to narrow down the field,” said Mayor Michael Kohut. “We plan to select a preferred developer in January.”

The mayor said the eventual structure of a deal with a proposer could be in the form of a property sale, a lease, or a partnership venture with the village.

The Village released a Request for Proposal (RFP) for development of two waterfront parcels known as the Chair Factory and Damiani Properties in July. The Village-owned parcels sit on a peninsula at the foot of Main Street at the widest point of the Hudson River with views of High Tor Mountain, Westchester, and Bowline Point Park.

In the RFP, the village said it was looking for an “anchor use” for the downtown that integrates residential, hotel/conference center, entertainment, and retail uses. The village wants future development to create a draw for the waterfront, but also connect the waterfront with Main Street via a public square.

“We want this development to be an extension of our Main Street,” said Kohut. “We want to liven the downtown, bring new businesses, continue the village’s revitalization.”

The stars are aligning for the village, which recently won a $10 million downtown revitalization grant from New York State. The grants are aimed at developing strategic investment plans and implementing key projects that advance the community’s vision. Kohut said he expects the funds will be used throughout the village but will aid in establishing infrastructure on the site.

“Sewer, electric, everything has to be re-established on the site,” said the mayor.

The village acquired the property in early 2008 in condemnation proceedings for $2.14 million. Ginsburg Development had been in negotiations with the village to acquire the property and develop condominiums, a parking garage to serve the relocated Haverstraw to Ossining ferry, retail, and other uses. However, when the recession hit later that year, Ginsburg ended property acquisition talks with the village.

Ginsburg has completed the final (rental) units at the Harbors at Haverstraw and is moving forward with development of a parcel that is adjacent to both Harbors and the Chair Factory site.

Unlike many waterfront developments, the village’s plan for the site is focused on housing “that will keep our young people here,” said Kohut, adding that the village will contemplate up to 225 units with a 10 to 20 percent allocation of affordable housing. The plan is seeking a combination of townhomes and rental apartments.

The village’s RFEI plan states that it its hopeful that the development plan would “expand the existing downtown to the waterfront without dramatically changing the character of the community while creating a balance of ‘revenue positive’ development and waterfront public amenities and open space.”

Kohut said plans from Calyx, M Squared, MPact Collective, and the O’Neill group, the four teams at the table, all include a boutique-style hotel ranging from 40 to 50 rooms.

“We’re not looking for a 250-room hotel on the waterfront,” Kohut added.

Village officials also foresee an opportunity for mom-and-pop retail, though the mayor quipped that he wouldn’t mind if Starbucks wanted to open a waterfront location in the village.

At least one prospective developer is considering integrating a Haverstraw Brick Museum expansion into its hospitality concept. Museum board president Richard Sena said he’s working with the development team from the MPact Collective to create exhibit space as well as outdoor demonstrations for brick making.

“The vision for the village has always been about tourism,” said Sena. “We need a reason for people to come here. The museum could be the draw. It could play a crucial role in elevating the village’s culture.”

In the 1800s, Haverstraw was a brickmaking hub; it’s where coal dust was first added to the clay mixture in 1815, which cut burning time in half at the kilns, and where Richard A. Ver Valen invented the first automatic brickmaking machine in 1852. By the middle of the century, Haverstraw was producing millions of bricks a year.

By the latter half of the 19th century, thousands of people were employed at the brickyards. But on Jan. 8, 1906, tragedy struck: A landslide caused by the continuous excavation for clay killed at least 19 people and destroyed countless streets, shops, and houses. Exhibitions about the landslide are on permanent display at the Haverstraw Brick Museum, which was founded in 1995 by descendants of brickyard workers.

By the late 1920s, the industry was fading because it was being replaced with cement, cheaper European imports, and even bricks manufactured more cheaply down south.

The former Chair Factory property was for decades part of the Excelsior Brick Company’s holdings.

“The waterfront site is the perfect location to highlight the legacy of brickmaking, bring walking tours, and create the kind of buzz and excitement the village has been talking about for 20 years,” Sena added.