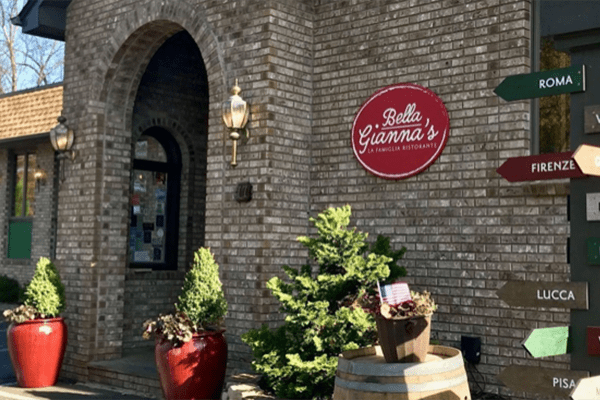 Clarkstown Planning Board Recommends Against Lifting Restrictive Covenant That Only Allows Restaurant On Rural Site; Restaurant Wants To Redevelop Site For Office, Retail

The owners of Bella Gianna’s on Route 303 in Congers say they’ve been trying to sell their restaurant for years but have not had any bites. To pivot their marketing strategy, the restaurateurs, who also own the acre-site the Italian restaurant is situated on at 77 Route S. 303, would like to redevelop the parcel for retail or office use.

However, they need the Town of Clarkstown’s permission to be extricated from a “restrictive covenant” the previous owners, Romolo’s, agreed to in order to shift marketing tactics. The restrictive covenant, which runs with the land, limits the site to restaurant use, and to a “floor area ratio” of .35. The restaurant, however, does have a right to have a drive-through because that kind of use is permitted on major roads such as Route 303.

Originally, the parcel surrounded by a mostly residential neighborhood to the east of Route 303, was zoned R-15. The property was re-zoned to CS (commercial shopping) to accommodate the restaurant, but the restrictive covenant limited the owners from expanding the use of the property to those otherwise permitted in the CS zone including churches, schools, offices, animal hospitals, auto parts stores, appliance stores and many other retail uses.

“This was a carve out,” said Town of Clarkstown Planning Board member Edward J. Guardaro, Jr. “It is a sensitive area; they wanted a quiet family restaurant that would not have a lot of traffic volume.”

Guardaro along with most of the planning board views lifting the covenant as risky.

The Planning Board last week reached a non-binding opinion that will be considered by the Town Board, which has the ultimate say. The planning board voted five-to-one to keep the restrictive covenant in place, saying the site was ill-suited for retail because it is surrounded on three sides by a residential neighborhood.

On Tuesday, the matter will go before the Town Board for final consideration. The Town Board does not have to follow the Planning Board’s recommendation.

In the context of property and land use, a restrictive covenant obligates the property owner to refrain from some specific activity or use on their property.

In 2018 Bella Gianna’s was featured on celebrity chef Gordon Ramsay’s Fox show “24 Hours To Hell and Back,” that was framed as an Italian family-style restaurant “in desperate need of improvement.”

The reality show begins with Ramsey eating at the restaurant in disguise, Ramsay unveils himself and powwows in the kitchen to critique the food, the service, the management dynamics. The restaurant is closed for 24 hours as Ramsay doles out advice including pointing out improper food storage and other dysfunction. There’s a 24-hour countdown to relaunch the restaurant, with all the expected drama of a reality show. Family tensions are on display. Décor is given an upgrade. Food is tossed. Pep talks are had. Ultimately, a night-long renovation pleases everyone.

The restaurant owners say it’s been tough to keep the restaurant afloat since COVID, though their troubles predate the virus. By the time Bella Gianna’s was starring on Ramsay’s show, its owners were already trying to sell it.