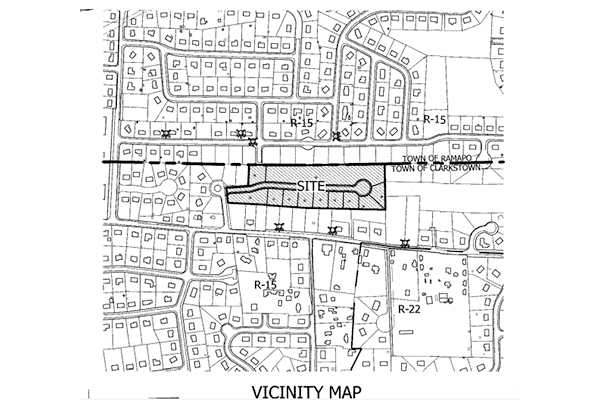 Although Clarkstown Planning Board is juggling a host of issues with several building proposals on West Clarkstown Road and the vicinity, the latest application at a hearing last week boiled down to a narrow issue that may impact other building projects in the future.

In reviewing Emerald Estates II, a proposal to build a 10-house subdivision off Emerald Court near West Clarkstown Road in New City, Planning Board Chairman Gilbert Heim said the design is faulty because the town limits cul-de-sacs to 15 homes. The project would open a road between Emerald Court, an existing eight-home cul-de-sac, and the new proposal, which would exceed the limit by three houses.

Heim concluded the proposed project on 8.3 acres of forested land would essentially “combine two cul-de-sacs” or be a “cul-de-sac within a cul-de-sac,” and offered the applicant New City Square Property LLC of Monsey the opportunity to scale back the project to seven homes to get approval.

“The town code says you can’t have more than 15 homes on a cul-de-sac,” said Heim. “This board has to look at the project as one cul-de-sac.”

Heim’s assessment differed with an earlier determination from the town’s building inspector who said these are two separate cul-de-sacs and building the new subdivision is permissible under the town code. The vacant site is zoned R-15 zoned land, which allows single-family homes on a minimum of 15,000 square-foot lots.

“If we have to take the building inspector to ZBA (Zoning Board of Appeals), we will,” Heim said defiantly.

However, board member Peter Streitman also raised the point that this would not be the first time that cul-de-sacs have been merged, and said he worried about setting a precedent.

“I don’t see a major issue with the ten lots,” he said. “What have we done with other applicants when we’ve considered cul-de-sacs?”

At least one resident said it seemed unfair to have bought a home in a cul-de-sac, and to have the benefits of having made that purchase undermined by a decision to create an access road. Cul-de-sacs are generally quiet and more private than streets with through-roads.

An access road for the project was originally proposed through Unity Lane on the border of Ramapo. Deputy Town Attorney Paul Schofield said accessing the proposed development through Unity Lane is problematic, particularly for snow plowing, because Clarkstown’s highway department would need to access the road via two Ramapo Roads. Therefore, the developer has proposed a cut-through from Emerald Court.

In addition, residents have raised concern over flooding, wetlands, and traffic.

Ultimately, the planning board voted 5-2 in favor of giving the project a “positive declaration,” under SEQRA (State Environmental Quality Review Act), which means the board believes the project has the potential for significant adverse environmental impacts. This requires the applicant to undertake a more extensive environmental review.

Opposition for Emerald Estates II, along with several proposed projects on and in the vicinity of West Clarkstown Road, have raised concerns over increased traffic not just one project but for many. The applicant’s engineer Atzl, Nasher &  Zigler said the traffic study shows no significant impact to the neighborhood.

However, the board took a keen interest in residents’ testimony of flooded backyards, sinking driveways, and standing water that plagues the cul-de-sac and the surrounding area. The proposed project includes a plan to fill a portion of existing wetlands, and to double the acreage of the wetlands elsewhere on the property, as required by the Army Corp of Engineers.

The applicant proposed drainage plan along the western edge of the property and intends to dedicate a portion of the property to the Town of Clarkstown with a conservation easement.

Nevertheless, residents have been struggling for decades with extreme flooding and are skeptical of promises that new development will not aggravate the issue. Years ago, the town failed to secure drainage easement on a subdivision to the south known as “Fayva Court.”

The town has since taken at least two residents to Justice Court to require them to clear clogged drainage ditches.

“This board is well familiar with our concerns over this proposal, and all the proposed development,” said Laura Biden, an activist with CUPON Clarkstown. “This board must consider what West Clarkstown Road is going to look like in five to ten years.”