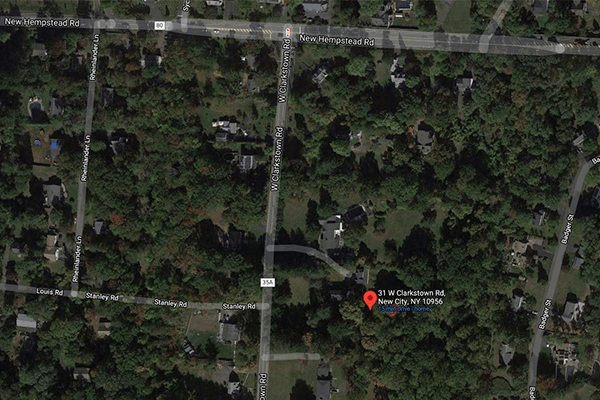 Clarkstown Town Planning Board members raised a multitude of concerns over a proposal to build a religious school on West Clarkstown Road during a Wednesday night hearing that attracted nearly 200 community members.

Speaking for residents in the community who oppose the school, CUPON member Laura Bidon presented an extensive report with video and photos that detailed concerns over traffic, environmental issues, safety, aesthetic scale, and ownership for the proposed 600-student girls yeshiva at 31-41 West Clarkstown Road.

“There are still many serious questions that must be addressed,” Bidon told the Planning Board. Prior to Bidon’s presentation, Board President Gil Heim said he was going to do something “unusual” and allow Bidon to present her report. After more than two hours of testimony from the community, Heim told the applicant to address the issues that have been raised prior to the next hearing, which will be scheduled in January.

CUPON’s report had already been submitted to the Planning Board. Attorney Ira Emanuel, who is representing the applicant, said his client did not have anything to add from the prior hearing, and that he was there to listen to what the public had to say. At the last meeting, he opened with the right of religious organizations to build even if it is a traffic burden to the community.

Universally, residents and board members spoke of worries about the proposed project. Congregation Kollel Lomdei Shas in Spring Valley, which wants to develop the property under the name 31 W. Clarkstown LLC, plans to demolish two single-family homes, combine the lots, and construct a 37,455 square-foot private school for 600 students (K-8) and 50 parking spaces on 6.6 acres of R-40 zoned land. The plan also calls for at least 15 school buses. Schools are a permitted use in R-40 zones.

The application has been before the board since 2018.

Bidon opened her discussion with concerns over flooding and environmental issues, referring specifically to flooding on Badger Street. She said the project calls for two retention basins, underground cisterns and a drainage plan that will discharge storm water toward West Clarkstown Road existing drainage system.

“This proposed system is not without risks,” she said, citing a retention basis breach in 2016 at the Sky Ridge subdivision that caused runoff to contaminate Crum Creek and Lake Lucille in New City. Bidon also said she believed the basins may improperly be situated in the required setbacks to the property line.

Perhaps the most commented on issue from Bidon and others centered on traffic and safety obstacles. West Clarkstown Road is already burdened with a steady flow of traffic, and “this portion of West Clarkstown Road is served by two fire departments,” said Biden. “What routes will each respective fire department use to access the facility or surrounding properties?” Also raised were concerns over access for EMS and other emergency vehicles.

The developer of the proposed school, which hired The Multi Group of Companies to conduct a traffic study, has told the Planning Board that the study showed the proposed school would have no significant impact on traffic. Board members balked at those results, as well as the review from the Town’s traffic consultant AKRF.

Board members and residents alike appear uneasy with the vagueness of the school proposal, particularly as it relates to the arrival and departure of buses, a suggestion that their routes would be “staggered” to alleviate congestion, and anticipated backup because there is only one ingress and one egress on the property and West Clarkstown Road is constantly taxed with traffic.

“Given the ‘head in’ vertical configuration of the bus stalls, and the fact that backing up is not allowed for school buses, how will each bus exit in the event another bus is delayed?” Bidon questioned.

The applicant previously said at least 90 percent of students will ride buses rather than be driven by car. The applicant said mainly kindergarten-age children are dropped off by their parents or guardians car-pooling in about 30 cars. He estimated some 15 buses holding up to 72 students would arrive at staggered arrival and departure times between the morning rush from 7:45 to 8:30 am and the 4:15 to 5 pm dismissals.

Opponents of the project also questioned whether the owner, a corporate entity, qualifies as a religious corporation. Schools are allowed by right in residential zones on state and county roads. But Bidon pointed out that the application is in the name of “Paul Zev Koschitzki, “whom no one has ever met,” but the property owner is 31 W. Clarkstown LLC, of which the applicant is listed as the sole member.

“How does this proposal qualify as a religious school if neither the applicant nor the property owner is a religious corporation?” Bidon said. This sentiment was emotionally echoed by Planning Board Member Phillip DeGaetano.

Planning board members also questioned the feasibility of asking for only 50 parking spots for a 600-student school. They drew comparisons to Adolph Schreiber Hebrew Academy of Rockland (ASHAR), a 500-student school that recently received approvals to expand both its building and the number of parking spaces to nearly 80.

Finally, Bidon appealed to the Board to think about a raft of proposals for West Clarkstown Road and the vicinity and not to consider this project in a “piecemeal fashion.”

Community members are worried over at least six development projects that are either pending or have been given approval on the mostly residential byway that is also County Road 35A, which connects New Hempstead Road and New Clarkstown Road, on the western edge of Clarkstown bordering the Town of Ramapo.

Recently, the Planning Board granted preliminary site plan approval for the demolition of the existing L’Dor Assisted Living Facility at 156 West Clarkstown Road without discussing the impact of traffic on the road as a whole. L’Dor plans to construct a new 40-unit, two-story replacement property.

The most visible site that would undergo transformation is the former Champion Day Camp site at 175 West Clarkstown Road, which had most recently been operating as Camp Merockdim, an Orthodox Jewish day camp. Rockland County developer Gabe (Gavriel) Alexander is under contract to buy the 9-acre parcel in New City and is proposing a senior housing project..