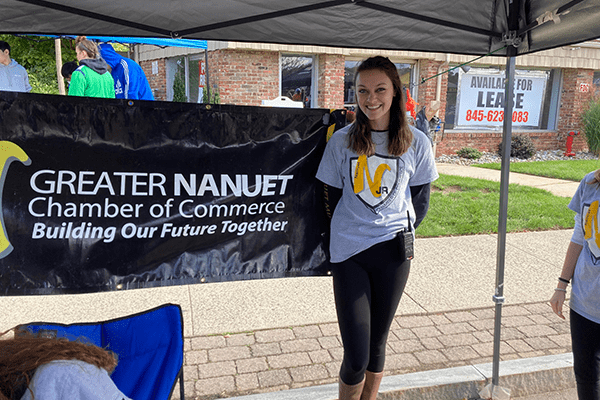 It doesn’t sound as sexy as ski club or the Gay-Straight Alliance, but the Junior Chamber Club at Nanuet High School signed up 40 students this year and it’s growing. Not to be confused with a music club, Junior Chamber, an extension of the Greater Nanuet Chamber of Commerce, is a club for teens who are interested in the intersection of business and community.

Founded in 2019 with about 20 students, the club has doubled in size and its presence in the community is becoming noticeable. Junior Chamber organized Nanuet’s first tree-lighting ceremony two years ago, it helped promote local businesses during the pandemic, and now its members are aiming to raise $9,000 to install a clock on Middletown Road in Nanuet. The clock would be sited amid a planned renaissance for downtown Nanuet.

“We’re really getting into the swing of things,” said Club President Samantha Murray, who was running a booth at the Nanuet Street Fair last Sunday. “This is a great opportunity for students to connect to the community and to understand what goes on beyond the school. We have a lot of big plans.”

Junior Chamber is an innovative outgrowth of the Greater Nanuet Chamber of Commerce, which sprung to life about nine years ago after community members coalesced around building the High View Playground. Groups like these often discover that a focused community effort around one project can evolve into a greater mission to influence how a place evolves.

Six weeks after the inception of Junior Chamber, its members impressed its mentors and the community with the town’s first tree-lighting ceremony. Admittedly the tree was a bit of a Charlie Brown’s Christmas tree, but the event was a smash. Junior Chamber learned to navigate the halls of government by seeking permission to hold the event, they involved the district’s school clubs, recruited entertainment and offered hot cocoa.

“They wanted Nanuet to become like a Hallmark movie,” said Farese. “The tree was a little sad, but the Moldow family has donated a mature, 25-foot tree for future ceremonies.”

There was no tree-lighting ceremony in 2020; Junior Chamber is now planning the second annual event for Dec. 4.

“To keep the district upbeat during COVID, they held ‘Build A Snowman’ contests, collecting donations from local businesses to award prizes for best photos.

“It’s really great to be excited and connected to what’s going on in our community,” said Murray. We understand how important local businesses are. We all hang out at Martio’s Pizza. We like having a pizza shop to go to. We understand why it needs to be supported.”

The club president said members are focused on raising donations for the Adopt a Spot site at the intersection of Church Street, Middletown Road and Old Middletown Road. The Nanuet Chamber of Commerce, as well as its nonprofit arm Nanuet & Beyond, are helping with the fund drive. To date, $1,029 has been raised toward the $9,000 goal.

Word about Junior Chamber has spread around the county, with other Chambers looking to Nanuet for guidance on replicating the idea in their towns.

“We’ve been getting calls from other chambers,” said Farese. “It’s really a great opportunity for schools, chambers and the community at large.”

But Junior Chamber also has its sights on some passion projects including a dog park, Movie Night, and to keep growing the club.

“We’re in the middle of everything,” said Murray. “It’s a great club.”