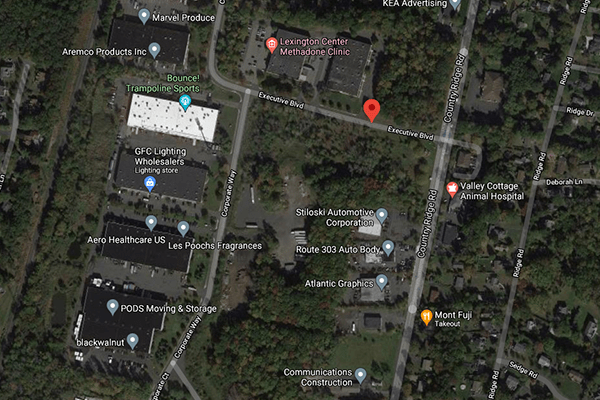 Lincoln Equities, Which Plans To Build A 220,000-Square-Foot Warehouse, Will Seek Zoning Variance For Height

Clarkstown planners have advised the developer that hopes to build a 220,000-square-foot warehouse at Executive Corporate Park on Route 303 in Valley Cottage that there are likely to be traffic, environmental, and land disturbance issues that will need addressing for the project to proceed.

At the Town’s Technical Advisory Committee last week, Town Planner Joe Simoes told Lincoln Equities that the traffic study submitted by the developer is likely to be insufficient because it examined only three intersections within the executive park and the intersection of Executive Drive and Route 303.

The New Jersey-based distribution center developer is proposing to build an industrial warehouse on 20 acres in Executive Corporate Park.

The project calls for a 220,000sf warehouse structure with 54 loading docks, 53 trailer parking spots and 250 additional employee parking spaces. Access to the facility would be on Executive Drive, though the project runs adjacent to Route 303, just south of the stoplight at Executive Drive and Route 303. The property is zoned “CO” which allows for distribution and warehouses, as a matter of right.

Town planners suggested that added truck and auto traffic might cause a downgrade in the 5-corners intersection’s “level of service”. Levels of service are letter grades assigned to intersections, ranging from A to F. A downgrade of a level of service usually indicates a proposed use would have a significant impact on traffic in the area and require the developer to mitigate the impacts, possibly through road widening, traffic signal adjustments, or restrictions on its hours of operation traffic at peak usage.

These matters will next be addressed by Clarkstown’s Planning Board in a public hearing.

The application must also be reviewed by the Rockland County Planning Department, as it sits within 500 feet of Route 303, a state road.

According to the developer’s proposal provided by Langan Engineering, traffic generated by the project will be “minimal,” estimating an additional seven trucks to weekday morning peak traffic and eight to the afternoon rush hour. The report does not take into consideration the 24-7 nature of logistics warehouses or the differences between a “warehouse” and a “distribution” or “fulfillment” operation.

With everybody wanting everything delivered “yesterday”, this type of distribution/fulfillment center is among the hottest trend in commercial real estate development. Lincoln Equities, which builds and owns distribution centers in New Jersey, Connecticut and Long Island, hopes to develop a warehouse that would be used for companies like Amazon, UPS, and Fedex that store and distribute goods. The applicant told TAC that it is building the warehouse “on spec,” meaning it does not yet have a dedicated tenant.

The developer wants to erect a 50-foot structure in a zone that permits a total height of 40-feet and must therefore seek a variance from the Zoning Board of Appeals. Other warehouses in the business park range between 20- and 32-feet high.

The applicant writes that “50-foot-high buildings is consistent with modern warehouse facilities to serve the market and a building of that height is not incongruous with the intent of the zone, the Master Plan, or the neighborhood where the property” is situated.”

Town planners also raised concern over the applicant’s need to remove trees. They said there is insufficient area on the property to replace razed trees but the applicant would have the option of planting trees on an adjacent parcel it owns or paying into a Town’s “tree fund.” Another issue is its need for a waiver to build the entire project at once as the town limits the areas of disturbance to five acres at a time. The building itself is approximately five acres in size.

The town has already determined that the application is a “Type-1 SEQRA”, which means it will be subject to a full environmental review before the Planning Board. Environmental issues might include noise from a 24/7 operation, traffic on nearby roadways, diesel exhaust and the release of particulate matter from idling and operating trucks, air quality monitoring, and the potential restriction on operating hours.