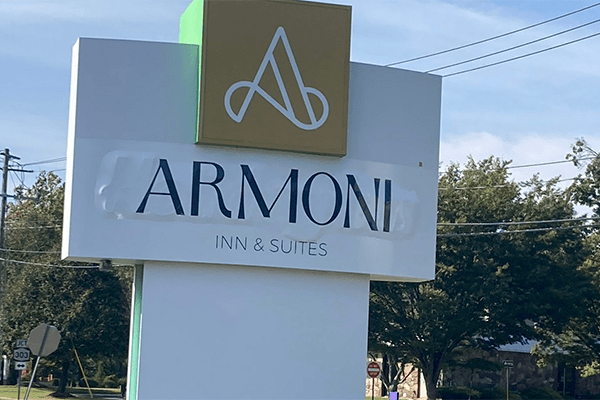 The Town of Orangetown has a new independently-owned hotel – the former Holiday Inn on Route 303 in Orangeburg.

Real estate developer Etta Ostreicher of Monsey has purchased the former chain hotel at 329 Route 303 for a reported $5.8 million and renamed it the Armoni Hotel.

This is the first hotel purchase for Ostreicher, president of Paramount Ventures of Spring Valley. Ostreicher, who bought the entity under the name Palisades Estates EOM LLC, is a real estate developer, investor, operator, and syndicator, according to her LinkedIn page. Her page says she looks for “off market deals with great upside,” and has “extensive expertise in sourcing deals to the right investors.”

Ostreicher did not respond to an email seeking comment but the general manager at the hotel confirmed the developer purchased the entity from Orangeburg LLC, the former operator of the 171-room Holiday Inn.

In addition to purchasing the hotel property, Palisades Estates also acquired an assignment of the underlying ground lease.

For now, the hotel has retained much of the Holiday Inn’s staff and is continuing its operations but general manager Jeanne Emmanuel, who has been with the hotel for two years, said the new owner plans to transform the property into a boutique hotel. The hotel has two banquet rooms, a bar and restaurant and an outdoor pool.

“We’re going to become a boutique after a renovation,” said Emmanuel. “We will be renovating the rooms but for now we’re continuing to operate.”

The general manager says the hotel, which in Hebrew means “chestnut,” will be marketed to corporate travelers and tourists.

Aside from Armoni, Orangetown’s hotels are major chains, or “flags” as they are known. The town has a Residence Inn by Marriott in Orangeburg and a Hilton in Pearl River. The former IBM property in Palisades that was bought and run as a hotel and conference center by HNA Palisades Center at 334 Route 9W is in the process of a prospective sale by a team of developers who intend to transform the property into a resort. The hotel has been shuttered since COVID. And the former Time Hotel in Nyack has been rebranded a “Joie de Vivre,” a Hyatt brand.

In July, Orangetown chose a “preferred developer” to redevelop the HNA Palisades Center – the Kitching/Pelayo team. Mark Kitching and Jerome Pelayo are a real estate broker for Douglas Elliman and a house builder respectively. Their plan envisions an updated hotel/conference center, world-class spa, a restaurant with biodynamic gardens, spaces for makers, 50,000-square feet of photo and film studios, test kitchens and co-working.

In Nyack, the former Time Hotel, which opened in 2016, was the town’s first hotel to position itself as a boutique property for urban tourists and business travelers. The 133-room hotel at 400 High Street in Nyack filed bankruptcy in 2018.  In 2019, a U.S. Bankruptcy Court judge approved the $18.5 million sale of the The Time Hotel of Nyack to Juniper Time LLC, a company affiliated with IMH Financial Corporation. The hotel, which had promised to be a game-changer for the Village, continued to struggle.

Bobby Van’s Steakhouse (BVs Grill), the celebrity-named steak and seafood restaurant at The Time Hotel in Nyack, closed in August 2020.

Last February, the hotel was rebranded under Hyatt’s “Joie de Vivre” signature line in a franchise agreement. The Joie de Vivre brand, created in 1987, runs hotels with “an edge, playfulness, and a deep respect for its neighborhoods,” according to its website. “Each location is uniquely inspired by its surroundings and is a story about the community.”