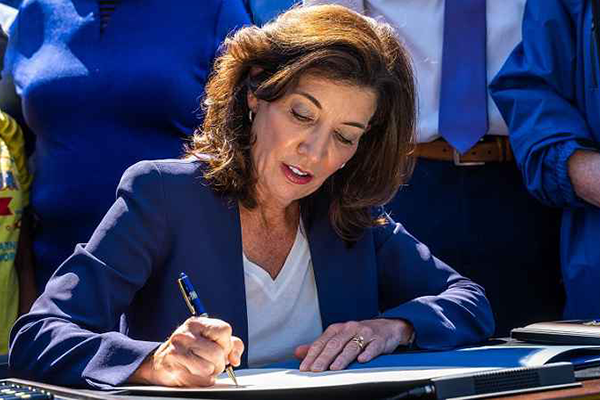 The legislation (A.3350-A/S.2766-C), signed on Labor Day by Gov. Kathy Hochul, makes contractors on construction projects jointly liable for wages owed to employees of their subcontractors.

Construction contractors are not currently liable for wages of their subcontractors’ employees unless there is an employment relationship between the contractor and the employee of the subcontractor. This law goes into effect Jan. 4th 2022, and was co-sponsored by State Senators Elijah Reichlin-Melnick and James Skoufis.

The law exempts home-improvement contracts except for the construction of more than ten one- or two-family owner/occupied dwellings.

“This Labor Day, we make history for New York’s workers. Addressing wage theft in the construction industry and strengthening the benefits for New Yorkers in the Shared Work Program put more money in working families’ pockets,” said Senator Jessica Ramos. “I thank the Governor for taking soonest action and look forward to continuing our work towards a fair and inclusive recovery.”

Gov. Kathy Hochul held a Labor Day press conference Monday in Buffalo where she signed a number of laws designed to strengthen and protect the state’s workforce.

The governor began her briefing by quoting notable labor author Samuel Gompers, the first and longest-serving president of the American Federation of Labor (AFL).

The Associated General Contractors of New York State, which represents construction employers, opposes the legislation. The group supports wage theft prevention but views the legislation unfavorably because it extends liability for up to three years after a project has been completed.

The new law “creates an unmanageable level of risk for general contractors, according to Mike Elmendorf, CEO of AGC NYS.

He says it complicates contractors’ abilities to unsure projects, slows payments to subcontractors, and raises the cost of construction.”

However, proponents say the law will incentivize general contractors to be more careful in the hiring of subcontractors, and use greater oversight on construction sites, promoting safer working conditions, and forcing subcontractors with a history of labor abuses out of the industry.

It also provides a line of defense for workers who have nothing standing in the way of them and labor abuses, particularly immigrant, Black, indigenous and nonunion workers. Advocates for the law say the bill demonstrates to workers across the state, especially immigrant and non-union workers, that they are valued.

“Today, we are taking critical steps forward to eliminating wage theft, “said Assemblymember Latoya Joyner. This legislation protects the interests of hardworking construction workers over unscrupulous subcontractors. Wage theft is a crime of opportunity that disproportionately affects people who are already living paycheck to paycheck. With this legislation, New York State will ensure that construction workers are no longer exploited and will be able to collect any unpaid wages. Hard work deserves hard earned compensation.”