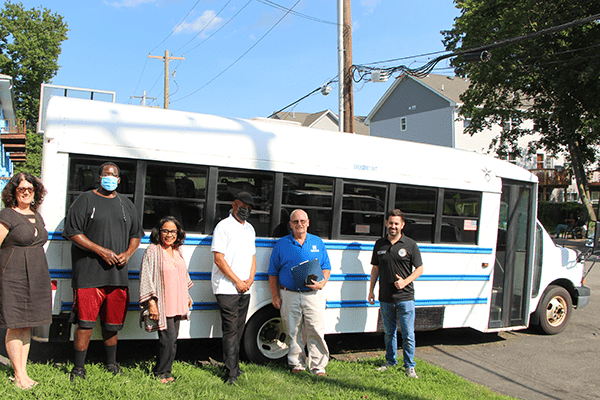 Earlier this summer, the folks at Martin Luther King Multi-Purpose Center in Spring Valley heard a crash. An old van – the center’s only van – parked outside was hit by a car and totaled. It was beyond repair. The nonprofit center recovered “a couple of dollars” from the insurance company for the 15-year-old van that had been used mostly to transport food but occasionally to ferry community seniors that rely on the center for transportation.

Last week, the Center once again had a set of wheels, thanks to a donation from the Chestnut Ridge Transportation, Inc., a nearly 50-year-old bus company based in Chestnut Ridge.

The bus company donated a 2015, 24-seat Trans Tech Van, that had been used to transport community residents to ARC. The bus, which has clocked 100,000 miles, has a value of $24,000, according to John Corr, president of Chestnut Ridge Transportation. The bus’s lifespan can extend another 100,000 miles, he added.

“We used to use our old van to transport food,” said Winsome Downie Rainford, the center’s President of the Board of Directors. “Food distribution is one of the major things that we do. We purchase food from the New York State Food bank. Since the COVID lockdown, we have distributed over 500,000 pounds of food. We’re the third largest food bank in the county.”

Since the van was obliterated, the center, strapped by its limited resources, has been renting trucks to collect and transport food.

Last week, Chestnut Ridge Transportation delivered the painted white bus to the center. A ceremony included the bus company, representatives from the MLK Multi-Purpose Center, and Assemblyman Mike Lawler, who connected the two entities after learning about the need.

“I was honored to work to connect the Martin Luther King Multi-Purpose Center and Chestnut Ridge Transportation so that this donation could happen,” said Lawler. “It will go a long way toward helping the center fulfill the needs of the Spring Valley community, and I look forward to partnering with them on future projects.”

Downie Rainford said the nonprofit views this donation as a timely gift.

“We’ve been without a vehicle for the entire summer,” said Rainford. “We primarily used the van for food pick-up, but we also relied on it to transport our seniors on field trips.

“We are so grateful for the generosity of Chestnut Ridge Transportation,” she said. “We are a nonprofit without any dedicated source of funding. Any gift is greatly appreciated.”

Corr said he believes it’s important to “give back to the community that keeps us in business.”

Corr, whose father founded the transportation company in 1974 with contracts to transport students in the East Ramapo Central School district, operates 350 vehicles and employs more than 500 people.

Over the last five years, the company has donated more than 50 vehicles locally including to Good Samaritan Hospital, as well as to far-flung places in need such as Haiti, Chernobyl, and Africa.

“When the vehicles age out, we try to put them to good use because they still have plenty of life. The MLK Center, or groups like this that take care of the community, are a godsend. What little piece is going to help, we’re proud to do our part.”