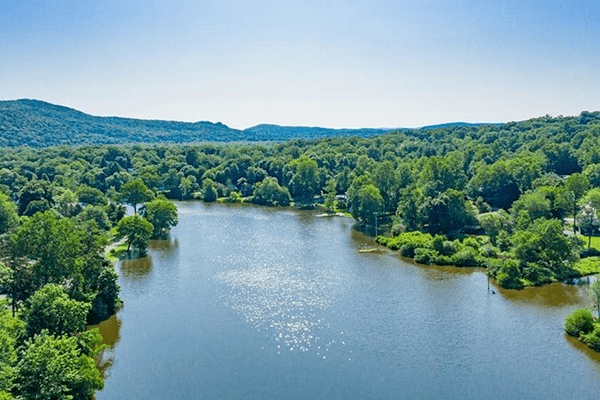 Both nonprofits allege the West Nyack concrete company is polluting the 45-mile Hackensack River which originates at Lake Lucille in New City and empties into Newark Bay. From its headwaters, the Upper Hackensack River flows into several man-made reservoirs including Lake DeForest in Clarkstown, Lake Tappan on the New York/New Jersey border and then into the Oradell Reservoir.

The plaintiffs allege that whenever it rains or snows, contaminants from the concrete business drain into a tributary of the Hackensack River, and ultimately flow into Newark Bay, New York Harbor, and the Atlantic Ocean.

The company’s yard on Route 59, located across the road from The Palisades Center, stores sand, aggregate, stone, Portland cement and other materials and equipment used to make Ready-mix concrete. Whenever it rains or snows or ice melts, the stormwater drains into a pond on the site, and from there, flows into a tributary of the Hackensack River, the suit says.

The company’s concrete batch plant, fleet of trucks, truck washing equipment, piles of materials, and other industrial equipment are all potential sources of pollution, the complaint says, that could include cement additives, fly ash, fuel and lubricants and other chemicals.

Rockland Transit Mix allegedly does not have a state stormwater permit, has not applied for a permit, and does not comply with stormwater regulations, according to the suit.

One of the most significant sources of water pollution, the complaint says, is stormwater runoff from industrial sites. The Clean Water Act requires industrial sites to get a stormwater permit, limit discharges of pollutants, and monitor the stormwater.

The plaintiffs say they are frustrated by the lack of action from the federal government or New York State. Neither the U.S. Environmental Protection Agency nor the State of New York “has commenced a civil or criminal action to redress the violations,” the organizations say.

Stormwater runoff is one of the most significant sources of water pollution in the nation — comparable to, if not greater than, contamination from industrial and sewage sources, according to the suit.

The complaint says the State of New York has designated as “impaired” more than 7,000 river miles; 319,000 acres of larger waterbodies; 940 square miles of harbors, bays, and estuaries; 10 miles of coastal shoreline; and 592 miles of Great Lakes shoreline. Under the Clean Water Act, “impaired” means not meeting water quality standards and/or unable to support beneficial uses, such as fish habitat and water contact recreation. For the overwhelming majority of water bodies listed as impaired, stormwater runoff is cited as a primary source of the pollutants causing the impairment.

New City Neighborhood Association is an educational nonprofit that focuses on important issues and preserving their quality of life founded in 2017 by New City resident Timothy Halo.

Hackensack Riverkeeper, based in Hackensack, New Jersey, spends about $700,000 a year on restoring and preserving the Hackensack River watershed according to its 2019 federal nonprofit tax return. Founded in 1997, Hackensack Riverkeeper has been credited with helping revive the ecology of the Meadowlands, bringing recreation like kayaking and eco-tours to the lower portions of the river and fighting to keep land preserved at its headwaters.

The plaintiffs are asking the court to declare the company in violation of the Clean Water Act, stop it from discharging pollutants, and require it to apply for a stormwater permit. They are asking for unspecified civil penalties and note in the complaint that violators can be assessed up to $56,460 a day per violation.

Bruno Palmieri of Rockland Transit Mix could not be reached for comment.

The nonprofit groups are represented by Manhattan attorneys Edan Rotenberg and Ben Pierce.